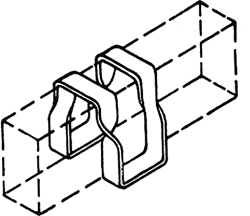 hanger, 1
1. A wire, strap, or rod attached to an overhead structure, used to support a pipe, conduit, the framework of a suspended ceiling, or the like.
2. A U-shaped, stirrup-like bracket used to support the end of a beam or joist at a masonry
McGraw-Hill Dictionary of Architecture and Construction. Copyright © 2003 by McGraw-Hill Companies, Inc.

Feedback
Flashcards & Bookmarks ?
Please log in or register to use Flashcards and Bookmarks. You can also log in with
Flashcards ?
My bookmarks ?
+ Add current page to bookmarks
References in periodicals archive ?
The Massachusetts Convention Authority hired Simpson Gumpertz & Heger, at a cost of $300,000, to inspect the deteriorating tiles; place 42 new ceiling hangers and determine if the tiles can be removed without replacing them.
Showing its age; Pru tunnel woes another infrastructure warning
This included a different batch of posters each week, tags, signs, talkers, jumpers, wobblers, ceiling hangers and colorful pop-up displays in every shape and size imaginable.
Cut the POP clutter: in-store marketing should make things easier for shoppers, not confuse them with an endless stream of messages
The chain ran a series of television and radio spots to introduce the campaign for its first three weeks, and then supported that run with four weeks of radio, regularly reinforced by broadcast advertising schedules, point-of-sale materials--including ceiling hangers, aprons for produce staff, and buttons for all front-line staff--and promotional information in Price Chopper's 1 million-print weekly advertising circular.
Triple threat: Price Chopper is deflecting competition by backing its fresh reputation with a program that gives associates three chances to dump substandard product
Will we now see "ceiling hangers?" Perhaps the alliterative "bungee boxes" would be better.
Bungee boxes may be silly ... (Forum)
Three hanger styles include ceiling hangers for quick assembly and disassembly, hex pipe hangers for added flexibility in temperature variations, and round hangers to resist movement and vibration.
Supplier Showcase
Encyclopedia browser ?
Full browser ?
CITE
Site: Follow: Share:
Open / Close