There are several systems of celestial coordinates. The altitude-azimuth system begins from any given location on the Earth’s surface, and uses the horizon, the zenith, and the north-south axis as points of reference. The equatorial system uses the celestial equator and the vernal point as its primary reference points. Astronomers most often use this system. The ecliptic system uses the ecliptic and the vernal point. Astrologers most often use the ecliptic system. The second coordinate, the azimuth A, is the arc measured eastward from the north point along the horizon to the object’s vertical circle. (In astrometry, the azimuth is often measured westward from the south point S.) This arc, NESM, measures the spherical angle at Z between the celestial meridian and the object’s vertical circle; this spherical angle equals the dihedral angle between the two planes. The azimuth can have any value from 0° to 360°. An important characteristic of the horizon coordinate system is its dependence on the point of observation, since the zenith and the horizon are determined by the direction of the plumb line (vertical), which is different at different points on the earth’s surface. Because of this, the coordinates of even a very distant object are different when observed simultaneously from various points. In the process of moving along a diurnal circle, each object intersects the meridian twice; each passage of the object through the meridian is called a culmination. At the upper culmination, Z is smallest, and at the lower culmination, Z is largest. In the course of a day, Z varies between these limits. For objects whose upper culmination is south of Z, the azimuth A varies from 0° to 360° in the course of a day. But for objects that culminate between the celestial pole P and Z, the azimuth varies within certain limits that are determined by the latitude of the point of observation and the angular distance between the object and the celestial pole.

In the first equatorial coordinate system, the primary circle is the celestial equator QγQ1 (Figure 2), and the pole is the celestial pole P that is visible from a given point. In order to specify the position of an object σ, we draw a great circle, called the hour circle, through the object and through P. The arc of this circle from the equator to the object is the first coordinate—the object’s declination δ. The declination δ is measured from the equator in both directions from 0° to 90° and is taken to be negative for objects in the southern hemisphere. Sometimes, instead of the declination, we use the polar distance p, which is equal to the arc Per of the hour circle from the north celestial pole to the object; the quantity ρ can assume any value from 0° to 180°, so that the relation ρ + δ = 90° always holds. The second coordinate, the hour angle t, is the arc QM on the equator, measured from the intersection of the equator with the celestial meridian at the point Q located above the horizon in the direction of the rotation of the celestial sphere to the object’s hour circle. This arc corresponds to the spherical angle at P between the object’s hour circle and the arc of the meridian that is directed toward the south point. The hour angle of a fixed object changes from 0° to 360° in the course of a day, while the declination of the object remains constant. Since the hour angle changes in direct proportion to the time, it serves as a measure of time. The hour angle is almost always expressed in hours, minutes, and seconds of time; thus, 24 hr corresponds to 360°, 1 hr corresponds to 15°, and so forth. Both of the systems described above—the horizon and first equatorial systems—are called local systems, since coordinates in these systems depend on the point of observation.

The second equatorial coordinate system differs from the first only in the second coordinate. Instead of the hour angle, the second system uses the object’s right ascension α—the arc γ M on the celestial equator measured from the vernal equinox γ to the object’s hour circle in the direction opposite to the rotation of the celestial sphere (Figure 2). This arc measures the spherical angle at P between the hour circle passing through the point T and the hour circle through the given object. Usually α is expressed in hours, minutes, and seconds of time, and it may assume any value from 0 hr to 24 hr. Since the point γ rotates along with the celestial sphere, both coordinates of a sufficiently distant, fixed object in this system are independent of the point of observation.

In the galactic coordinate system, the primary circle is the 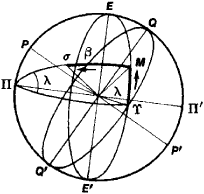 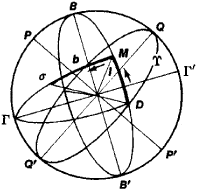 Observations of variations in celestial coordinates have led to very significant discoveries in astronomy, which are of great importance for the understanding of the universe. These discoveries include the phenomena of precession, nutation, aberration, parallax, and of the proper motion of stars. Celestial coordinates make it possible to solve the problem of measuring time and the determination of geographic coordinates of different points on the earth’s surface. Celestial coordinates find wide application in the compilation of various star catalogs, in the study of the true motions of celestial bodies (both natural and artificial) in celestial mechanics and in astrodynamics, and in the study of the spatial distribution of stars in stellar astronomy. 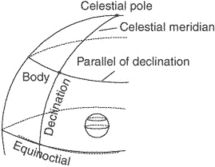 Feedback
Flashcards & Bookmarks ?
Please log in or register to use Flashcards and Bookmarks. You can also log in with
Flashcards ?
My bookmarks ?
+ Add current page to bookmarks
Mentioned in ?
References in periodicals archive ?
A hand control typically requires you to enter these objects' current celestial coordinates before it can point the scope.
Wired astronomy: initially a novelty item for amateur astronomers, computers are now almost as important as telescopes
The name of the newly discovered pulsar-J1838-0537 -- comes from its celestial coordinates.
Young neutron star experienced tremendous hiccup during fastest rotation
There over the disc, an azimuth circle 6 is located, it is for orientation of the device to the azimuth coordinates (they can further be processed into the geographical coordinates of the sources of a registered signal, or the celestial coordinates of it if it is located in the cosmos).
A new detector for perturbations in gravitational field
1090 and has several interchangeable plates, each engraved with the celestial coordinates for a different latitude.
Journey through the universe: a gallery of observations
Such was a practice of mapping since Ptolemy, because both depended on the same mathematical skills and the same celestial coordinates. What little we know of De' Marii indicates he probably had the requisite skills for both types of cartography, see Danti, 58.
Caprarola's Sala della Cosmografia
Are you comfortable with celestial coordinates (right ascension and declination)?
Using telescopes over the web: with an internet connection, you can rent and run telescopes from the Rockies to the Andes--cheap
Like a 21st-century greatest hits from Burnham's Celestial Handbook, Stars & Planets profiles each of the constellations and highlights its major stars and deep-sky objects, noting their celestial coordinates and a picture or two of the most photogenic.
Guide dilemma
Celestial coordinates are given by the ticks along the sides.
Deep-sky delights: telescopes and binoculars reach deep into the universe around us
Voyager 4's Coordinate panel provides the cursor's celestial coordinates as it moves around the display.
Sky voyager: one of astronomy's most enduring desktop-planetarium programs keeps getting better with age
There's a long list of popular targets that will be visible at the selected time, but you can also choose a faint fuzzy from among a dozen major catalogs or enter your own celestial coordinates. In the last two cases, Slooh will alert you if your selection won't be visible.
The new Slooh: for pennies per night, you can take photos using a mountaintop telescope