The two points at which the extension of the Earth's axis of rotation cuts the celestial sphere. As a result of the precession of the Earth's axis the positions of the poles are not fixed but trace out a circle on the celestial sphere in a period of about 25 800 years. The north celestial pole revolves about a point in the constellation Draco and at present lies in Ursa Minor close to the star Polaris. The south celestial pole lies in the constellation Octans. See also pole star.
Collins Dictionary of Astronomy © Market House Books Ltd, 2006
The following article is from The Great Soviet Encyclopedia (1979). It might be outdated or ideologically biased. 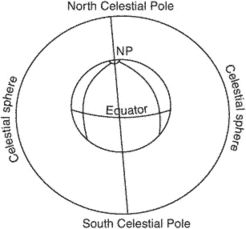 Feedback
Flashcards & Bookmarks ?
Please log in or register to use Flashcards and Bookmarks. You can also log in with
Flashcards ?
My bookmarks ?
+ Add current page to bookmarks
Mentioned in ?
References in periodicals archive ?
On the other side of Earth, however, the south celestial pole (SCP) has no complementary beacon to mark its position.
Polestars of the future: a journey in a celestial time machine! Thousands of years from now, will celestial navigators have good stars to steer by?
Stars at or near the celestial equator (0[degrees] declination) appear to move the most, tracing out the longest trails; those near the celestial poles (90[degrees]) will show the least.
As the world turns
Additional charts highlight both celestial poles, the central part of Orion, and the famous Virgo Galaxy Cluster.
New Chart for Keener Eyes
Planets, 25 of the brightest stars, the Magellanic Clouds, celestial poles, galaxies, nebulae, clusters, and constellations can be displayed by clicking on the buttons in the palettes.
Scientific Astronomer
For coordinates within 3 [degrees] of the celestial poles, the program defaults to Charts 1 and 2 or Charts 515 and 516 in Volume 1.
Software and chart synthesis
Plotting a position on the Uranometria 2000.0 charts is easy because epoch-2000.0 grid lines are shown for every degree of declination and, except near the celestial poles, for every four minutes of right ascension.
Hunting cosmic pearls in Aquila