celestial sphere, imaginary sphere of infinite radius with the earth at its center. It is used for describing the positions and motions of stars and other objects. For these purposes, any astronomical object can be thought of as being located at the point where the line of sight from the earth through the object intersects the surface of the celestial sphere. In astronomical coordinate systems, the coordinate axes are great circles on the celestial sphere. In most systems of this type, the reference points are fixed on the sphere, so the two coordinates needed to locate a body are relatively constant.
The Columbia Electronic Encyclopedia™ Copyright © 2022, Columbia University Press. Licensed from Columbia University Press. All rights reserved. 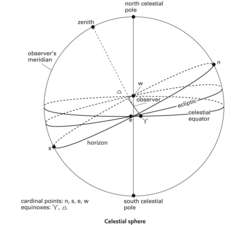 The sky considered as the inside of an imaginary sphere of indeterminate but immense radius that surrounds the Earth. It provides a convenient surface on which to draw and study the directions and motions of celestial bodies and other points in the sky. The Earth's west-to-east rotation causes an apparent rotation of the celestial sphere about the same (extended) axis once every 24 hours but in an east-to-west direction.

The measurements that may be made with the celestial sphere, using the four main coordinate systems of positional astronomy, concern not the distances but only the directions of celestial bodies. Angular relationships are established by the methods of spherical trigonometry (see spherical triangle). The principal reference circles on the celestial sphere are the celestial equator, the ecliptic, and an observer's horizon, which are all great circles. The principal points are the poles of these circles and the points of intersection – the equinoxes and cardinal points – of the circles (see illustration). 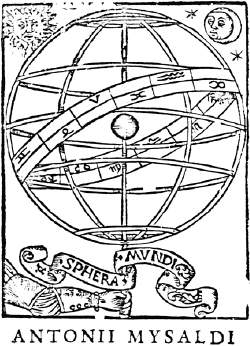 A diagram of the celestial sphere from Orontius Fine, c. 1542. Reproduced by permission of Fortean Picture Library.

The celestial sphere can be understood by imagining that all the objects in the sky are stuck against the inside of a gigantic hollow sphere, with Earth located at the exact center. The basic notion of the celestial sphere is assumed in various systems for locating celestial bodies in terms of celestial coordinates. Very much like terrestrial coordinates, which involve specifying a location in terms of longitude and latitude, celestial coordinates require two measurements of distance, expressed in terms of degrees of a circle. The altitude-azimuth system begins by situating itself at a specific location on the Earth’s surface, and uses the horizon, the zenith, and the north-south axis as points of reference. The equatorial system uses the celestial equator (Earth’s equator extended out into space and projected against the backdrop of the celestial sphere) and the vernal point (where the Sun is located at the point of the spring equinox) as its points of reference. Astronomers most often use the equatorial system. The ecliptic system uses the ecliptic (the orbit of Earth around the Sun, projected outward against the celestial sphere) and the vernal point. Astrologers use the ecliptic system.

an imaginary sphere of arbitrary radius on which celestial objects are projected; it is used for the solution of various astrometric problems. The concept of the celestial sphere originated in remote antiquity; it was based on the visual impression of a dome-shaped celestial surface. This impression results from the enormity of the distances to celestial objects; the human eye is unable to estimate differences in such distances, so that all the objects seem uniformly distant. Ancient peoples associated this with the presence of a real sphere that bounds the whole world and has numerous stars set in its surface. Thus, according to their concept, the celestial sphere was a most important element of the universe. With the growth of scientific knowledge, this concept of the celestial sphere lost importance. However, the geometry established in antiquity for the celestial sphere had already been developed and perfected into a modern form, in which it continues to be used in astrometry. 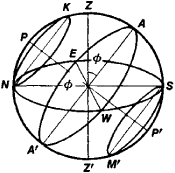 The celestial meridian intersects the horizon at two points—the one nearest the north celestial pole being called the north point N, and the one diametrically opposite being called the south point S. The line NS that passes through these points is the meridian line. The points on the horizon situated at 90” from the points N and S are the east point E and the west point W. The points N, E, S, and W are called the principal points of the horizon. The planes of the mathematical horizon and of the celestial equator intersect along the diameter EW. 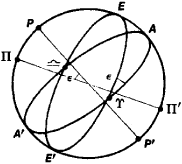 The apparent diurnal displacement of the stars, which is a reflection of the real rotation of the earth about its axis, corresponds to a rotation of the celestial sphere about its polar axis with a period equal to one sidereal day. Because of the rotation 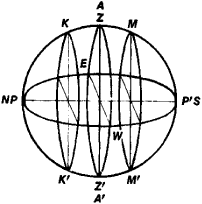 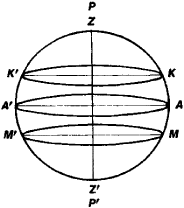 [sə′les·chəl ′sfir]
(astronomy)
An imaginary sphere of indefinitely large radius, which is described about an assumed center, and upon which positions of celestial bodies are projected along radii passing through the bodies.
McGraw-Hill Dictionary of Scientific & Technical Terms, 6E, Copyright © 2003 by The McGraw-Hill Companies, Inc. 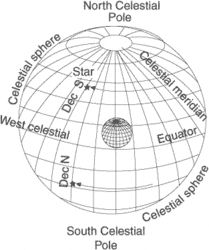 An imaginary sphere of infinite radius, centered at the center of the earth, on which the apparent motion of celestial bodies takes place. Because all stars are so far from an earthbound observer that they can be located solely by their direction, it is convenient to presume they are located on the inside of a spherical surface centered on the observer. Because the radius of earth is negligible, it is convenient to consider earth, rather than the terrestrial observer, centered in the celestial sphere. Stars are designated by their location on this sphere, and planets and other heavenly bodies are located against this background.
An Illustrated Dictionary of Aviation Copyright © 2005 by The McGraw-Hill Companies, Inc. All rights reserved

an imaginary sphere of infinitely large radius enclosing the universe so that all celestial bodies appear to be projected onto its surface
Collins Discovery Encyclopedia, 1st edition © HarperCollins Publishers 2005

Feedback
Flashcards & Bookmarks ?
Please log in or register to use Flashcards and Bookmarks. You can also log in with
Flashcards ?
My bookmarks ?
+ Add current page to bookmarks
Mentioned in ?
References in periodicals archive ?
The celestial sphere is moved by [its] soul (nafs), the soul being its proximate principle of motion.
The universe as a system: Ibn Sina's cosmology revisited
But, since the celestial sphere is moving westward at 15[degrees] per hour, the big trick in celestial navigation is knowing your time.
IFR by the sun and stars: not that long ago crews flew thousands of miles with no navigational aids except the sky itself. It's such an elegant solution
equinox Either of the two points on the celestial sphere where the celestial equator intersects the ecliptic (i.e.
Glossary
As they walk through, visitors will encounter the earliest known celestial sphere, found in eastern Turkey and dating back to 2nd century BC, as well as the scientific treatises by Greco-Roman astronomer, Claudius Ptolemy.
Cosmology in focus at Louvre Abu Dhabi's new exhibition
Celestial sphere. Unlike, say, "visualize invisible," the two terms thrust together in these examples are not inherently mutually exclusive.
A shrewd dumbness
The motion of the stars could be explained by the celestial sphere moving around us.
An illusion worth keeping an eye on
On Saturday, South Africa's powerful MeerKAT radio telescope, which is still under construction, gave a taste of things to come when it released its "first-light" image showing, in unprecedented detail, a patch of sky covering less than 0.01 percent of the entire celestial sphere. The image revealed 1,300 galaxies in this tiny corner of the universe where just 70 had been seen before.
South Africa's MeerKAT Telescope Snaps Its First Image
Morsels V contains 69 chapters divided into six categories: The Moon, Eclipses and Occultations, Planetary Motions, Planetary Phenomena, On the Celestial Sphere and Varia.
Mathematical Astronomy Morsels V
What is the brightest star in our celestial sphere? 4.
Quick Quiz 1. Who is [...]
Uttarayana is the time when the Sun travels towards north on the celestial sphere. The starting of Uttarayan is celebrated as Makar Sankranti throughout India.
Uttarayan brings people together in Gujarat
This unusual and detailed encyclopedia reviews the widely known constellations and locates stars relative to Earth and the celestial sphere. Kaler, professor emeritus of astronomy at the University of Illinois, details the colors, spectra, and chemical composition of stars, the motion of the galaxy, and the forms of star groupings, including binary stars and clusters.
The Cambridge Encyclopedia of Stars