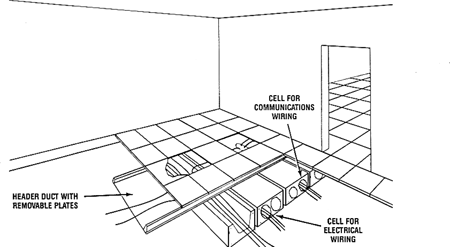 cellular floor
A floor having hollow openings in it that provide ready-made raceways for
McGraw-Hill Dictionary of Architecture and Construction. Copyright © 2003 by McGraw-Hill Companies, Inc.

Feedback
Flashcards & Bookmarks ?
Please log in or register to use Flashcards and Bookmarks. You can also log in with
Flashcards ?
My bookmarks ?
+ Add current page to bookmarks
Mentioned in ?
References in periodicals archive ?
(4) Figure 4a shows holes being drilled in the cellular floor deck and 4b air-boots being connected to voids in the cellular decks, which is used as air supply ducts.
Reducing energy use in older large buildings
Westok, which develops cellular floor beams in office block construction, had a record half year, with exports to the continent so far already significantly exceeding the amount achieved in the whole of last year.
Production grows at Wescol's pounds 3.5m plant
Popular floor-based feed and distribution systems are poke-through and cellular floor systems.
All cellular floor systems utilizing preset outlet boxes and trench header must be spray fireproofed on their underside to achieve a fire rating.
* Cellular floor systems provide independent cells for power, telephone, and data that are covered by a concrete topping and separated by concrete at all butt joints.
Life safety and wire distribution: follow these tips to choose a safe wire distribution system
An architectural solution may be a cellular floor and cable trays along upper walls, while interior design solutions may consist of furniture containing wire management.
The architectural and interior design planning process
[We] used that cellular floor distribution to bring the cables from the core of the building out to the offices around the perimeter," notes Cooper.
Hipper headquarters for Sony
Robertson Company, in conjunction with its sister company, Ceco Concrete Construction (an Oakbrook Terrace, IL-based concrete forming supplier), has introduced cellular floor technology to concrete framed structures.
Cellular floor system to be used with concrete framed structures
But the divestiture of AT&T, coupled with tremendous technological advances in the workplace, gave birth to a new concern in today's office design: selection of an effective power and data and communication distribution system -- three of which are raised floor, cellular floor, and ceiling plenum (poke-through) for premium building performance.
Design specification of a raised floor, cellular floor, or ceiling plenum distribution system is initially dependent on who is using the space and for what purpose.
In cellular floor distribution systems, wire and cable is run through steel or concrete distribution cells, with trench headers normally used to feed the cells from vertical distribution closets.
With structural and electrical components combined in the wire distribution system, cellular floor manufacturers cite reductions in material and labor costs during construction as a prime motivator in the use of these systems.
Three choices for wire distribution