The field concerning the interactions among cells and molecules of the immune system, and how such interactions contribute to the recognition and elimination of pathogens. Humans (and vertebrates in general) possess a range of nonspecific mechanical and biochemical defenses against routinely encountered bacteria, parasites, viruses, and fungi. The skin, for example, is an effective physical barrier to infection. Basic chemical defenses are also present in blood, saliva, and tears, and on mucous membranes. True protection stems from the host's ability to mount responses targeted to specific organisms, and to retain a form of “memory” that results in a rapid, efficient response to a given organism upon a repeat encounter. This more formal sense of immunity, termed adaptive immunity, depends upon the coordinated activities of cells and molecules of the immune system.

Several types of cells play a role in protecting the body from infection, and they are found primarily in the blood and lymph. Specific immune responses mainly involve the activities of T-lymphocytes and B-lymphocytes, two types of white blood cells. A response is initiated when a pathogen triggers the activity of one or both of the two major types of T-cells: CD4+ cells, also known as helper T-cells (TH); and CD8+ cells, also known as cytotoxic T-lymphocytes (CTL) [see illustration].

When CD4+ T-cells are triggered, they release factors called cytokines, which in turn stimulate B-lymphocytes to make and secrete antibodies. See Antibody, Cytokine

When CD8+ T-cells are triggered, they release factors that kill a cell harboring an infectious agent, and they also release cytokines. Virus-infected cells commonly are the targets of cytotoxic T-lymphocytes, since viruses need to get inside a cell in order to reproduce.

The immune system must detect a pathogen before a response can be made. This phase of the response is shown in the interaction between a T-cell and an antigen-presenting cell (APC) [see illustration]. An antigen is a molecule, or portion of a molecule, that is recognized by a T-cell receptor (TCR) or antibody molecule. The cell surface molecules involved in antigen recognition by T-cells are the T-cell receptor and class I or class II molecules of the major histocompatibility complex (MHC). Each T-cell expresses a unique T-cell receptor that will interact specifically with a limited set of antigens. The antigens recognized by T-cell receptors are short peptides bound to MHC molecules. See Histocompatibility 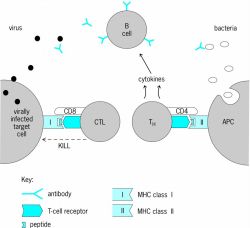 Antigen recognition, as mediated by the T-cell receptor–MHC–peptide interaction, is necessary, but generally it is not sufficient for the initiation of an immune response. Several other molecular interactions occur between molecules on the T-cell surface and those on the antigen-presenting cells. The co-stimulation provided by these additional interactions drives the production of cytokines by T-cells and induces their proliferation.

Once an immune response has been initiated, T-cells and B-cells proliferate and become mature responder cells. These cells do not have the same requirement for co-stimulation once a response is under way. As pathogen elimination nears completion, many of the T- and B-cells involved in the response die. However, a subset of cells remain as memory cells, which can be quickly called into action if the same pathogen is encountered on a future occasion. See Acquired immunological tolerance, Cellular immunology, Immunity, Immunology

[¦sel·yə·lər ‚im·yə′näl·ə·jē]
(immunology)
The study of the cells of the lymphoid organs, which are the main agents of immune reactions in all vertebrates.
McGraw-Hill Dictionary of Scientific & Technical Terms, 6E, Copyright © 2003 by The McGraw-Hill Companies, Inc.

Feedback
Flashcards & Bookmarks ?
Please log in or register to use Flashcards and Bookmarks. You can also log in with
Flashcards ?
My bookmarks ?
+ Add current page to bookmarks
Mentioned in ?
References in periodicals archive ?
* 11th international Conference on Clinical and Cellular Immunology -- Aug.
The Week Ahead In Biotech: FDA Goes Into Overdrive In A Quiet Week
Previously, he served as Vice President of Translational Immunology and Immunopharmacology at Compass Therapeutics, where he led the discovery and IND approval of CTX-471, a CD137 agonist antibody, and built the cellular immunology and autoimmunity research teams.
TCR-2 Therapeutics Deepens Manufacturing and Immuno-Oncology Expertise with Key Hires
- US-based CEL-SCI Corp.'s (NYSE American: CVM) senior vice president of research, cellular immunology Daniel Zimmerman, Ph.D.
CEL-SCI Presents New Data for Its LEAPS Vaccine in the Treatment of Rheumatoid Arthritis at the American Association of Immunologists 103rd Annual Meeting
CEL-SCI Corporation announced that Daniel Zimmerman, Ph.D., its SVP of Research, Cellular Immunology, presented new LEAPS data at the American Association of Immunologists 103th Annual Meeting in San Diego, California on Saturday, May 11, 2019.
CEL-SCI presents new data for its LEAPS vaccine in the treatment of RA
in cellular immunology comes in handy when exploring the world of macrophages and neutrophils.
NATURAL CAUSES
Searle, "Natural killer (NK) cell activity of first trimester human decidua," Cellular Immunology, vol.
Natural Cytotoxicity Receptors in Decidua Natural Killer Cells of Term Normal Pregnancy
Schoofs, "A comprehensive summary of LL-37, the factotum human cathelicidin peptide," Cellular Immunology, vol.
Cathelicidin LL-37 Affects Surface and Intracellular Toll-Like Receptor Expression in Tissue Mast Cells
The Cellular Immunology and Molecular Pathology Section of St.
St. Luke's global accreditations, recognitions, and affiliations
He took postdoctoral training in synthetic peptide chemistry at the Rockefeller University (New York, New York) and in cellular immunology at the University of Chicago.
Emerging Concepts in Head and Neck Squamous Cell Carcinoma
degree in cellular immunology and microbiology from Moscow State University.
Osiris Therapeutics promotes from within for Chief Scientific Officer
Many of these laboratories use very advanced molecular and cellular immunology tools and equipment.
Immunology as a medical discipline in South Africa: why, how and what form?