centrifuge (sĕnˈtrəfyo͞oj), device using centrifugal force to separate two or more substances of different density, e.g., two liquids or a liquid and a solid. The centrifuge consists of a fixed base or frame and a rotating part in which the mixture is placed and then spun at high speed. One type is used for the separation of the solid and the liquid parts of blood. Test tubes containing blood specimens are set in the rotating part in holders so arranged that when the rotary motion begins the test tubes swing into a slanted or a horizontal position with the open ends toward the axis of rotation; the heavier, solid part of the blood is thrown outward into the bottom of the tube and the lighter liquid part comes to the top. Another common type of centrifuge called the cream separator is used to separate cream from whole milk. Uranium-235, which is found in nature mixed with uranium-238, must be separated to be used to produce nuclear energy. The separation can be done by a centrifuging process in which the uranium, contained in gas molecules, is rotated at high speed in a chamber so that the more massive molecules containing uranium-238 concentrate near the outer edge of the chamber and the lighter molecules containing uranium-235 concentrate near the axis. Several stages of centrifuging are needed to effect the required degree of separation. The first successful centrifuge was built in 1883 by Carl G. P. de Laval, a Swedish engineer, whose design was used chiefly for cream separators. The ultracentrifuge, devised in the 1920s by the Swedish chemist Theodor Svedberg, found wide application in scientific research. Using an optical system with it to observe sedimentation rates, Svedberg determined accurately the molecular weights of substances including proteins and viruses. Centrifuges are also used for such diverse purposes as simulating gravitational fields in space and for drying laundry.
The Columbia Electronic Encyclopedia™ Copyright © 2022, Columbia University Press. Licensed from Columbia University Press. All rights reserved.
The following article is from The Great Soviet Encyclopedia (1979). It might be outdated or ideologically biased.

a machine used for centrifugation. The main component of a centrifuge is the rotor, or drum, which spins about its own axis at high speed. The rapid rotation creates a centrifugal force field of up to 20,000 g in industrial centrifuges or up to 350,000 g in laboratory centrifuges; here, g is the acceleration due to gravity. 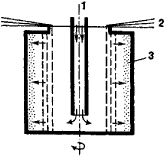 For centrifugal clarification, two types of centrifuges are used: batch and continuous. In batch clarifying centrifuges (Figure 1), an inhomogeneous mixture—such as a suspension—is fed into the central part of a hollow rotor while the rotor is spinning. Solid particles settle to the inner surface of the rotor, and the clarified liquid is discharged from the upper part of the rotor. After the rotor stops spinning (in some cases, while it is spinning), the sediment is removed through special nozzles or through outlets that are opened periodically. In conveyor-type continuous centrifuges (Figure 2), the suspension is fed along the axis of a hollow rotor. The liquid is discharged from the wide part of the rotor, and the sediment is transported by a screw conveyor to the narrow end of the rotor, where it is unloaded through discharge outlets.

Centrifugal filtration is most often carried out in centrifuges that operate in cycles (Figure 3). Such centrifuges have a continuously rotating perforated drum, which is covered on the inside by a filter cloth; the suspension is fed into the drum in batches. After part of the drum is filled with filter cake, the feed portion of the 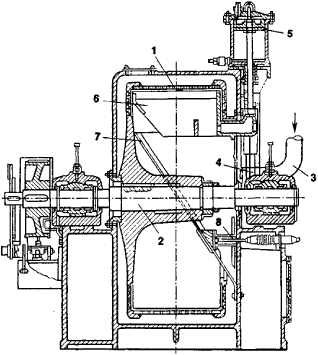 cycle ends, the liquid phase is centrifuged, and the cake is cut with a blade and removed. Then, the feeding of the suspension resumes, and the cycle is repeated. Centrifuges with, for example, screw-conveyor, pulsating, or vibrational unloading systems are used to separate concentrated suspensions with a relatively coarse solid phase.

Centrifuges are used in, for example, the chemical, food-processing, microbiological, and mining industries.

[′sen·trə‚fyüj]
(mechanical engineering)
A rotating device for separating liquids of different specific gravities or for separating suspended colloidal particles, such as clay particles in an aqueous suspension, according to particle-size fractions by centrifugal force.
A large motor-driven apparatus with a long arm, at the end of which human and animal subjects or equipment can be revolved and rotated at various speeds to simulate the prolonged accelerations encountered in rockets and spacecraft.
McGraw-Hill Dictionary of Scientific & Technical Terms, 6E, Copyright © 2003 by The McGraw-Hill Companies, Inc.

i. A mechanism where humans and animals are exposed to very high centrifugal forces and the effect on their bodies is observed.
ii. A method of separating a liquid mixture or suspension into its various components, each of which has different specific gravity.
An Illustrated Dictionary of Aviation Copyright © 2005 by The McGraw-Hill Companies, Inc. All rights reserved