An organelle located in the cytoplasm of all animal cells and many plants, fungi, and protozoa that controls the polymerization, position, and polar orientation of many of the cell's microtubules throughout the cell cycle. There is usually one centrosome per cell, located near the cell's center; it doubles during interphase, so there are two when the cell divides. At the onset of mitosis, each centrosome increases the number of microtubules it initiates. These mitotic microtubules are more labile and generally shorter than their interphase counterparts, and as they rapidly grow and shrink they probe the space around the centrosome that initiated them. When the nuclear envelope disperses, the microtubules extend from the centrosome into the former nucleoplasm where the chromosomes have already condensed. Some of these microtubules attach to the chromosomes, while others interact with microtubules produced by the sister centrosome, forming a mitotic spindle that organizes and segregates the chromosomes. During anaphase, sister centrosomes are forced apart as the spindle elongates, allowing each daughter cell to receive one centrosome to organize its microtubules in the next cell generation. See Cell cycle, Cell motility

The shapes of centrosomes differ widely between organisms. The centrosomes of animal cells (see illustration) usually contain a pair of perpendicular centrioles including a parent centriole formed in an earlier cell generation and a daughter centriole formed during the most recent interphase. Centrioles can serve as basal bodies for the initiation of a cilium or flagellum in the cells that make them. They appear to be essential for the formation of these motile appendages, so centriole inheritance by both daughters at cell division is analogous to the transmission of a gene. See Centriole, Cilia and flagella, Cytoskeleton 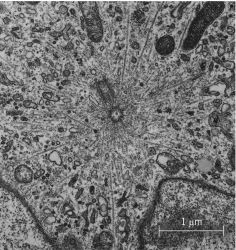 Centrosome of a mammalian cell

Centrosome action is regulated as a function of time in the cell cycle. The increase in microtubule number that occurs prior to mitosis is correlated with a significant increase in the extent of phosphorylation of several centrosomal proteins. The protein kinase p34cdc2, which helps to regulate the cell cycle, is concentrated at the centrosome, together with cyclin-B, a positive regulator of this kinase. See Mitosis

cytocentrum, or mitotic center, a permanent structure in almost all animal and some plant cells that determines the poles of dividing cells (mitosis). The centrosome usually consists of two centrioles—compact granules 0.2–0.8 microns in size—at right angles to each other.

When the mitotic apparatus is formed, the centrioles separate to the cell poles, determining the orientation of the spindle of cell division. Therefore, the centrosome is more properly called the mitotic center to reflect its functional significance, the more so since the centrosome is located in the center only in a few cells. In the course of an organism’s development, the position and the shape of the centrosomes in the cells change. When the cells divide, each daughter cell receives a pair of centrioles. Their doubling most often occurs at the end of the preceding cell division. A number of pathological forms of cell division are due to abnormal division of the centriole.

also centrosphere, that portion of the cytoplasm which surrounds the centrioles in a cell. The centrosome lacks cellular organoids; it is more condensed than the rest of the cytoplasm, and it can be stretched and moved about by microsurgical procedures. The term “centrosome” was formerly often used in the literature as a synonym for “centriole.”

[′sen·trə‚sōm]
(cell and molecular biology)
A spherical hyaline region of the cytoplasm surrounding the centriole in many cells; plays a dynamic part in mitosis as the focus of the spindle pole.
McGraw-Hill Dictionary of Scientific & Technical Terms, 6E, Copyright © 2003 by The McGraw-Hill Companies, Inc.