In the Tantric Hinduism of India, the ancient practice of yoga is a form of meditation designed to bring spiritual power through seven chakras (circles) located between the base of the spine and the top of the head. Although in the therapeutic sense chakras are viewed as the places where ch'i, or life force, is often bound up or blocked, in the religious sense they represent psychological centers or planes of consciousness through which spiritual power flows. From first to last, chakras represent spiritual growth.

The first chakra is located at the base of the spine at the rectum. Its symbol is the serpent, coiled three and a half times, and it represents the basic human need for killing and eating. The serpent, in the words of Joseph Campbell, is:

Nothing but a traveling esophagus going along just eating, eating, eating.... This is the sacramental mystery of food and eating.... In early mythologies [people] would thank the animal they were about to consume for having given of itself as a willing sacrifice. There's a wonderful saying in one of the Upanishads: "Oh wonderful... I am food.... I am an eater of food." We don't think that way today about ourselves. But holding on to yourself and not letting yourself become food is the primary life-denying negative act. You're stopping the flow! And a yielding to the flow is the great mystery experience that goes with thanking an animal that is about to be eaten for having given of itself. You, too, will be given in time.

In short, the first chakra reminds us of our place in the universe—as part of the food chain. We don't just live in nature. We are a part of nature.

The second chakra is located at the sex organs. This represents the urge to procreate, to reproduce our species and ourselves.

The third chakra is located at the navel and represents the will to conquer, to master and subdue. It is no accident that Sicilian dons in the Mafia, the godfathers, were referred to by a Sicilian phrase that translates to "men with a belly." From the sumo wrestler to the professional football lineman, a big belly symbolizes power and force.

These first three chakra centers represent the animal instincts of eating, procreation, and mastery. When we move up to the fourth chakra we enter a new realm, opening up to compassion and spirituality.

The fifth chakra is located at the level of the throat and symbolizes creativity and communication.

The sixth chakra is located at the forehead—the "third eye" often pictured on the forehead of representations of Buddha. This is the eye that sees inward—the center of intuition and understanding.

The culminating chakra is the sahasrara, the thousand-petaled lotus at the top of the head. This is the chakra of spiritual maturity, exploding upward and outward into understanding and enlightenment.

When spiritual energy is brought up from the level of the animal to the level of spiritual awareness, it wakes up to the real world—the world of god-consciousness.

From the ancient Hindu Kundalini, the chakra (pronounced shak'rer) is one of a number of centers of spiritual power in the body. Theosophists say they are the sense organs of the ethereal body. The Hindu concept is one of cosmic energy latent in the human organism. Hindu mystics saw the kundalini as a serpent coiled at the base of the spine. When aroused, through meditation and breath control, the energy moves up the spine, touching each of seven chakra points, or centers. The first, or root, chakra is associated with the base of the spine and corresponds with the adrenal glands. The second (sacral) is the genitals, corresponding with the gonads; third, solar plexus (lyden); fourth, heart (thymus); fifth, throat (thyroid); sixth, third eye (pineal); seventh (sahasrar or "thousand petaled lotus") is the crown of the head (pituitary).

Arousal of the Kundalini, by awakening the chakras, results in a blissful experience described as comparable to the sexual embrace of god and goddess, Siva and his Consort. Many Witches utilize the Kundalini energy, the chakras, and the colors associated with them in working healing magic. 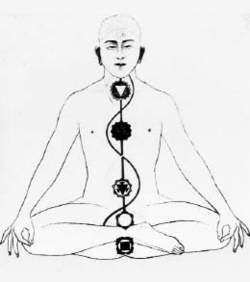 Chakra is the name given to the seven psychic centers of the body connecting the physical body to the etheric. The chakras are linked with actual physical glands and are positioned at the gonads (the lumbar or base chakra), the adrenals (the second, spine chakra), the lyden (third, solar plexus chakra), the thymus (fourth, heart chakra), the thyroid (fifth, throat chakra), the pineal (sixth, third eye chakra), and the pituitary (seventh, crown chakra). The Theosophists regard the chakras as the sense organs of the ethereal body.

An energy travels through the body connecting these chakras. This energy is known as the kundalini force, sometimes referred to as the Serpent Power, from the fact that ancient Hindu mystics saw it as a coiled serpent at the base of the spine, waiting to uncoil and reach upward. Getting the kundalini power to flow through the chakras sets up a vibration, the increase of which can enhance psychic abilities. As the power flows, the chakras begin to open up, in successive order, and the individual achieves a sense of well-being and peace. The subconscious clears itself of the negative and undesired patterns of feelings and images that have been programmed throughout the lifetime. As the opening continues, the individual’s awareness and perception of life flows continually from within and a new vibrancy permeates the entire being.

Each of the chakras is associated with a color: the base chakra with red, spine with orange, solar plexus with yellow, heart with green, throat with blue, pineal gland with indigo, and the crown with violet. An exercise practiced by many mediums and psychics to “awaken the Serpent Power” is to imagine each of the chakras as a flower (traditionally a lotus blossom) and to see it immersed in its particular color. This is one method recommended by the English medium Ivy Northage. Starting with the base chakra, imagine a red-colored flower swirling around in a clockwise direction, gathering energy to itself as it swirls. It becomes a spinning ball, going faster and faster. After a while, imagine the swirling light moving upward to the second, or spine, chakra and changing color to orange. It spins there for a while and then continues on up the body, changing color for each of the different chakras. At the crown, the light will change from violet to a pure white and will expand to enclose the whole body in a ball of white light. This is how a protective shell is built up before any exercises are done, such as clairvoyance, trance work, psychometry, healing, or even meditation.

a steel throwing ring with a sharp outer edge, used in the ancient Indian army. The chakra was twirled around the middle finger and thrown at an enemy.

Feedback
Flashcards & Bookmarks ?
Please log in or register to use Flashcards and Bookmarks. You can also log in with
Flashcards ?
My bookmarks ?
+ Add current page to bookmarks
Mentioned in ?
References in periodicals archive ?
Synopsis: Chakras are energy centers in our bodies whose flow monitor our internal functions, such as health, state of mind, and body functions, as well as our external environments, like alerting us when a place feels right for us or when it makes us feel uncomfortable.
In Focus Chakra Healing
Bollywood star Priyanka Chopra, who made headlines around the world with her marriage to US pop star Nick Jonas in December, also turned to Chakra while on her international pre-wedding bachelorette tour.
Lucy Hale heats things up in a Lebanese minidress
Another Indian soldier Rifleman Aurangzeb is also among the awardees of Shaurya Chakra. He was part of the operation during which renowned Kashmiri freedom activist, Sameer Tiger, was killed in April, this year.
Killer of Kashmiri civilians Major Aditya gets Shaurya Chakra
Sharing knowledge garnered from over many years in working with hundreds of clients around the globe, the Heart Chakra Healing Workshops are a perfect complement and resource for self-development, leadership, and spiritual practice.
Author, Coach, Speaker Radhaa Nilia Launches Heart Chakra Healing Workshop Tour
After the first theme, "Rushed" in the throat chakra, the patient can once again get a full night's sleep.
Personality development via the elimination of emotional conflicts
Even back then, Chakra expressed an interest in marketing more Arabic content through SVOD and transactional platforms.
A Fresh Take -- Gianluca Chakra
Chakra says that operating during that period stretched the limits of his creativity.
Georges Chakra
Join host and yoga instructor Yogi Troy McPeak, alongside four international models, as they take viewers on a journey through the mind, body and soul to explore the Seven Chakras of Yoga.
Model Yoga returns to fashion one
Chakra centers are located within the human body, from the base of the spine to the crown of the head.
Awakening the Chakras; The Seven Energy Centers in Your Daily Life
The more open the heart chakra, the more we can dive deep into our heart center, heal old wounds, connect with our inner soul and even have the capacity to tolerate challenges and bring a healing light to all of life's problems.
The Benefits Of Yoga's Back-Strengthening Poses
Pathankot bravehearts Lt Col Niranjan EK of NSG's bomb disposal squad and Corporal Gurusevak Singh have been conferred with Shaurya Chakra and are among the 82 defence and paramilitary personnel for whom President Pranab Mukherjee approved gallantry awards.
Ashok Chakra will pay Hangpan back
As usual a large crowd of fashion lovers and celebrities such as Princess Camilla of Bourbon-Two-Sicilies, Czech model and philanthropist Petra Nemcova, Chinese actress Kira Shi, model Jessica Min Anh, French actresses Vanessa Demouy and Emmanuelle Boidron as well as French model and beauty pageant winner Flora Coquerel attended Chakra's show alongside international press.
Chakra's star shines in bright Paris Fashion Week