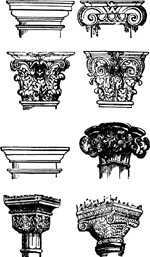 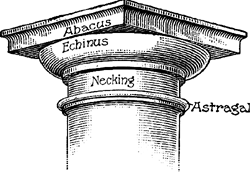 capital: nomenclature
The topmost structural member of a column, pilaster, anta, or the like, often decorated; may support an architrave, 1 or may be surmounted by an impost. See illustrations under the various orders; also see angle capital, basket capital, bracket capital, bud capital, Byzantine capital (illustrated under Byzantine architecture),
McGraw-Hill Dictionary of Architecture and Construction. Copyright © 2003 by McGraw-Hill Companies, Inc.

Feedback
Flashcards & Bookmarks ?
Please log in or register to use Flashcards and Bookmarks. You can also log in with
Flashcards ?
My bookmarks ?
+ Add current page to bookmarks
References in periodicals archive ?
Following this interpretation of the theta symbol, the symbolic content of the iota (I) of the next verse is not difficult to ascertain: it is the pillar itself, upon which the chapiter rests.
As was the case when Smart substituted the globe of the chapiter for the real earth, here he substitutes the harp for the letter G of the Masonic blazing star so that he can direct his sequence to a slightly different place, in this case to the psalms of David.
One chapiter represents the earth, the other the heavens.
All the crumbling edifices must come down: decoding Christopher Smart's Song to David
Encyclopedia browser ?
Full browser ?
CITE
Site: Follow: Share:
Open / Close