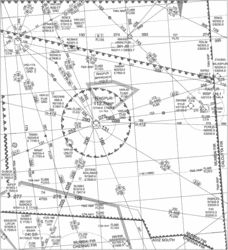 Chart.
Approach in which a radar-controlled aircraft on an IFR (instrument flight rules) flight plan (FP), operating in VFR (visual flight rules) conditions, and having an ATC (air traffic control) authorization may proceed to the airport of intended landing via visual landmarks and altitudes depicted on a published visual approach chart.
An Illustrated Dictionary of Aviation Copyright © 2005 by The McGraw-Hill Companies, Inc. All rights reserved

Feedback
Flashcards & Bookmarks ?
Please log in or register to use Flashcards and Bookmarks. You can also log in with
Flashcards ?
My bookmarks ?
+ Add current page to bookmarks
Mentioned in ?
References in periodicals archive ?
The AIM (5-4-24) defines CVFPs as "charted visual approaches established for environmental/noise considerations, and/or when necessary for the safety and efficiency of air traffic operations.
CHARTED VISUALS
Some airports have charted visual approaches that you' ll want to review in advance.
Big city arrivals: about 80 percent of U.S. airports are non-towered, but lurking among the remaining 20 percent are some big airport traps. Here's how to avoid 'em