Chased a rainbow | Article about chased a rainbow by The Free Dictionary
https://encyclopedia2.thefreedictionary.com/chased+a+rainbow
Printer Friendly

rainbow, arc showing the colors of the spectrum, violet inside and red outside, which appears when the sun shines through water droplets. It often appears while the sun is shining after a brief thundershower in the late afternoon or on fog layers. The sun, the observer's eye, and the center of the arc must be aligned—the rainbow appears in the part of the sky opposite the sun. The rainbow is an arc of 180° if the sun is at the horizon, and it cannot appear if the sun is high in the sky. It is caused by the refraction and reflection of rays from the sun on a “sheet” of water droplets. The light is refracted as it enters the sphere of the individual water drop, then is reflected from the drop's opposite side, and is again refracted as it leaves the drop and passes to the observer's eye. When conditions are suitable, a double rainbow may be seen; a larger, paler, secondary rainbow with colors reversed (red inside) outside the primary arc is caused by two refractions and two reflections of the ray while it is inside a drop. The “rainbows” of mist, lawn spray, and spray from a waterfall are similarly caused. The lunary rainbow, seen much less often, is usually observable soon after dark following a brief summer storm or shower when the moon is nearly full. Aristotle was first to devote serious attention to the rainbow, but his mistaken explanation of it misled thinkers for centuries. Descartes in the 17th cent. also attempted to account for the phenomenon but the correct explanation of it could not be furnished until the physics of light and its reflection and refraction were understood and the spectrum explained. In religion and art the rainbow symbolizes God's promise of mercy to mankind after the Deluge (Gen. 9.13). The Greeks and Romans called the rainbow the sign of Iris, messenger of the gods. The Inca and other Native Americans regarded the rainbow as a gift from the sun-god. There are fairy tales of searches for the pot of gold at the foot of the rainbow.

an optical phenomenon of the atmosphere that resembles a multicolored are in the sky. A rainbow is observed when solar rays shine on water droplets that are in the part of the sky opposite the sun. The center of the are of a rainbow is located on a straight line that passes from the solar disk to the observer’s eye; that is, the center is at a point opposite the sun. The are of a rainbow is the part of a circle circumscribed around this point with a radius of 42° (see Figure 1). 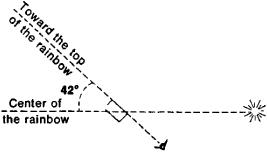 Figure 1. Schematic of the determination of the top and center of a rainbow

The color sequence in a rainbow is the same as in the solar spectrum. Red is usually located on the outside edge of the bow, and violet is usually on the inside edge. Secondary rainbows, which border on the main arc, are sometimes visible from the inside edge. The visible part of the rainbow are is determined by the sun’s position; when the sun is on the horizon, a rainbow is a semicircular are; as the sun rises, the visible part of the are decreases; and when the sun is at an altitude of 42°, the rainbow disappears.

A phenomenon similar to the rainbow may be observed in the spray of fountains and waterfalls. Moonbows and rainbows created by artificial light sources also occur. A secondary rainbow is frequently observed that has an angular radius of about 52° and a reversed color sequence.

The first rainbow theory was proposed in 1637 by R. Descartes. A more exact theory was developed in 1836 by the British astronomer G. Airy and in the late 19th century by the Austrian geophysicist I. M. Pernter. This theory is based on calculating the diffraction and interference effects that accompany the encounter of solar rays with the curtain formed by raindrops.

What does it mean when you dream about a rainbow?

The rainbow is a very happy and promising sign. Hopes and dreams are denoted by this wonderful symbol. Good luck comes to those who dream rainbow dreams.

[′rān‚bō]
(electronics)
Technique which applies pulse-to-pulse frequency changing to identifying and discriminating against decoys and chaff.
(optics)
Colored arc seen in the sky when the sun or moon is illuminating large numbers of falling raindrops.
(petroleum engineering)
Chromatic iridescence observed in drilling fluid that has been circulated in a well, indicating contamination or contact with fresh hydrocarbons.
McGraw-Hill Dictionary of Scientific & Technical Terms, 6E, Copyright © 2003 by The McGraw-Hill Companies, Inc.

1. a bow-shaped display in the sky of the colours of the spectrum, caused by the refraction and reflection of the sun's rays through rain or mist
2. of or relating to a political grouping together by several minorities, esp of different races
Collins Discovery Encyclopedia, 1st edition © HarperCollins Publishers 2005

(2) Digital Equipment's original offering in the PC market. The Rainbow, released between 1982 and 1986, used an Intel 8088 to run MS/DOS, but could also run CP/M programs because its Z80 keyboard processor served as an alternate CPU. The Rainbow was not hardware-compatible with the IBM PC.
Copyright © 1981-2019 by The Computer Language Company Inc. All Rights reserved. THIS DEFINITION IS FOR PERSONAL USE ONLY. All other reproduction is strictly prohibited without permission from the publisher.

(dreams)
Rainbows are colorful bridges that fall across the sky, but we cannot walk across them (or use them to get to our pot of gold). Currently you may experience great joy and have extraordinary or even magical ideas, but remember that you cannot walk across the rainbow bridge, so stay wellgrounded. Usually a rainbow follows a rainstorm. If so, you have weathered a difficult time that is coming to an end;this dream symbol may represent your optimism. Generally, rainbows make people smile and feel happy. Thus, some may consider this dream a sign of your good luck.
Bedside Dream Dictionary by Silvana Amar Copyright © 2007 by Skyhorse Publishing, Inc.