An apparatus (see illustration) for the continuous cultivation of microorganisms or plant cells. The nutrients required for cell growth are supplied continuously to the culture vessel by a pump connected to a medium reservoir. The cells in the vessel grow continuously on these nutrients. Residual nutrients and cells are removed from the vessel (fermenter) at the same rate by an overflow, thus maintaining the culture in the fermenter at a constant volume. 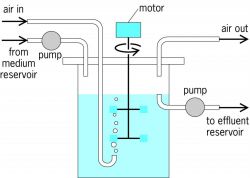 An important feature of chemostat cultivation is the dilution rate, defined as the volume of nutrient medium supplied per hour divided by the volume of the culture. During chemostat cultivation, an equilibrium is established (steady state) at which the growth rate of the cells equals the dilution rate. The higher the dilution rate, the faster the organisms are allowed to grow. Above a given dilution rate the cells will not be able to grow any faster, and the culture will be washed out of the fermenter. The chemostat thus offers the opportunity to study the properties of organisms at selected growth rates. See Fermentation

To achieve a steady state, parameters other than the dilution rate and culture volume must be kept constant (for example, temperature and pH). The fermenter is stirred to provide a homogeneous suspension in which all individual cells in the culture come into contact with the growth-limiting nutrient immediately, and to achieve optimal distribution of air (oxygen) in the fermenter when aerobic cultures are in use.

Laboratory chemostats usually contain 0.5 to 10.5 quarts (0.5 to 10 liters) of culture, but industrial chemostat cultivation can involve volumes up to 343,000 gal (1300 m3) for the continuous production of microbial biomass.

The chemostat can be used to grow microorganisms on very toxic nutrients since, when kept growth-limiting, the nutrient concentration in the culture is very low. The chemostat can be used to select mutants with a higher affinity to the growth-limiting nutrient or, in the case of a mixed population, to select the species that are optimally adapted to the growth limitation and culture conditions. The chemostat is of great use in such fields as physiology, ecology, and genetics of microorganisms. See Bacterial genetics, Bacterial physiology and metabolism, Microbiology

[′kē·mə‚stat]
(microbiology)
An apparatus, and a principle, for the continuous culture of bacterial populations in a steady state.
McGraw-Hill Dictionary of Scientific & Technical Terms, 6E, Copyright © 2003 by The McGraw-Hill Companies, Inc.