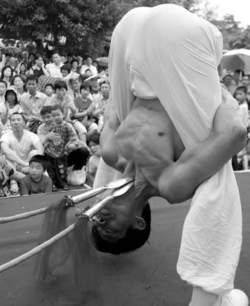 Feedback
Flashcards & Bookmarks ?
Please log in or register to use Flashcards and Bookmarks. You can also log in with
Flashcards ?
My bookmarks ?
+ Add current page to bookmarks
Mentioned in ?
References in periodicals archive ?
Ged, pictured, said: "In November 2004, I started teaching a class at Greens based on a system of exercises called chi gung.
Exercising a positive influence on your body
It drew together my interest in Taoism, healthy living, spirituality, body work/massage and chi gung (similar to Tai Chi and meditation).
Starting out
Saturday and Sunday: Liverpool Museum Cultural Activities -including Chinese calligraphy workshops,Tai Chi Gung exercises and demonstrations,dances and masks workshop.
Time Off: Happy (Chinese)New Year!
More commonly, however, she uses her skills and knowledge as an instructor in tai chi, chi gung, and yoga to help employees reduce accidents and injuries by improving their balance, concentration and flexibility.
Martial arts in the workplace: Can your employees "fight" their way to safety? Employers are beginning to use martial arts as a way to teach safety and reduce accidents and injuries in the workplace. (Workers' Comp)
Hudlin's latest martial arts interest is Chi Gung. His teacher and personal physician, Grandmaster Doo Wai, emphasizes that only a select few achieve Hudlin's closed-door disciple status because "few people have the patience, discipline, and intelligence to reach this level."
The way of chi
Esalen massage itself grew from a blend of ideas and practices: Swedish massage, martial arts, yoga, tai chi, chi gung, Western applied kinesiology, somatic arts, body work, subtle energy theories, polarity, cranial-sacral work, sports massage and native healing rituals.
Esalen massage: learn the healing power of touch from the renowned body workers of Esalen Institute
Macmillan Cancer Support will then run a "gentle movement" class the following week, based on the Chinese practice Chi Gung which aligns "breathing, physical activity, mental and spiritual awareness" and can be done seated or standing.
Library's activities list