An order of mammals (bats) in which the front limbs are modified as wings, thus making the chiropterans the only truly flying mammals. Bats form the second largest order of living mammals (16 families, 171 genera, some 840 species). They range from the limit of trees in the Northern Hemisphere to the southern tips of Africa, New Zealand, and South America, but most species are confined to the tropics. On many oceanic islands they are the only native land mammals.

The wing is formed by webs of skin running from the neck to the wrist (propatagium, or antebrachial membrane), between the greatly elongated second, third, fourth, and fifth fingers (chiropatagium), and from the arm and hand to the body (usually the side) and hindlegs (plagiopatagium). There is also usually a web between the hindlegs (uropatagium, or interfemoral membrane) in which the tail, if present, is usually embedded for at least part of its length (see illustration). 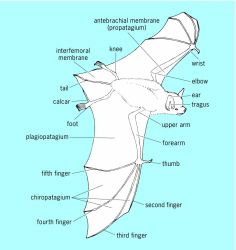 Features of the bat

Bats have a poor fossil record, but have been distinct at least since the Eocene, some 50,000,000 years ago. See Mammalia

(bats), an order of animals of the class Mammalia. Bats are capable of prolonged active flight. Their forelimbs are converted into wings, with only the first digit, or thumb, remaining free. The other fingers, the tarsal bones, and the antebrachium are elongated and serve as a frame for the leathery wing membrane, which extends between the sides of the body and the limbs. The tail, if there is one, usually forms part of the wing membrane. The ear conchae are well developed and, in many species (for example, those of the genus Plecotus), are quite large. Most bats have a tragus—a vertical cutaneous process that departs from the anterior margin of the aural openings. The pelage is generally well developed, except on the wing membrane. Cutaneous scent glands are usually present. The body ranges in length from 3 to 42 cm. The clavicle is well developed, and the sternum has a keel. The maximum number of teeth is 38, and the minimum is 20. The middle pair of upper incisors is always absent. The teeth are of the insectivorous type. The intestine is short, only 1½ to four times greater than the body length.

Bats are a flourishing order of mammals; only the rodents exceed bats in number of species. Fossil remains are closely related to extant forms and have been traced back to the Eocene. Bats apparently descended from primitive insectivores that were adapted to gliding. There are two suborders, Megachiroptera and Microchiroptera, embracing about 850 species. Bats are distributed worldwide, except in polar regions and a few oceanic islands. They are most numerous and diverse in the subtropics and tropics.

Crepuscular or nocturnal animals, bats spend their days in treetops, caves, hollows, rock fissures, and, not infrequently, buildings. Most live in large colonies. Their life-span may reach 20 years or greater. Bats usually reproduce once a year, producing one or two young. The males do not take part in raising the young. The majority of bats are insectivorous; some feed on fruit, pollen, and flower nectar. The normal position at rest is to hang head downward. Bats climb nimbly on vertical surfaces. Some are capable of long, rapid flights, and others fly only short distances.

[kī′räp·tə·rə]
(vertebrate zoology)
The bats, an order of mammals having the front limbs modified as wings.
McGraw-Hill Dictionary of Scientific & Technical Terms, 6E, Copyright © 2003 by The McGraw-Hill Companies, Inc.