(klôr`əfĭl'), green pigment that gives most plants their color and enables them to carry on the process of photosynthesisphotosynthesis
, process in which green plants, algae, and cyanobacteria utilize the energy of sunlight to manufacture carbohydrates from carbon dioxide and water in the presence of chlorophyll. Some of the plants that lack chlorophyll, e.g.
..... Click the link for more information. . Chemically, chlorophyll has several similar forms, each containing a complex ring structure and a long hydrocarbonhydrocarbon
, any organic compound composed solely of the elements hydrogen and carbon. The hydrocarbons differ both in the total number of carbon and hydrogen atoms in their molecules and in the proportion of hydrogen to carbon.
..... Click the link for more information.  tail. The molecular structure of the chlorophylls is similar to that of the heme portion of hemoglobin, except that the latter contains iron in place of magnesium. Within the photosynthetic cells of plants the chlorophyll is in the chloroplasts—small, roundish, dense protoplasmic bodies that contain the grana, or disks, where the chlorophyll molecules are located. Most forms of chlorophyll absorb light in the red and blue-violet portions of the visible spectrum; the green portion is not absorbed and, reflected, gives chlorophyll its characteristic color. Chlorophyll f absorbs near infrared wavelengths that are slightly beyond the red portion of the visible spectrum. Chlorophyll tends to mask the presence of colors in plants from other substances, such as the carotenoids. When the amount of chlorophyll decreases, the other colors become apparent. This effect can be seen most dramatically every autumn when the leaves of trees "turn color."
The Columbia Electronic Encyclopedia™ Copyright © 2013, Columbia University Press. Licensed from Columbia University Press. All rights reserved. www.cc.columbia.edu/cu/cup/

The generic name for the intensely colored green pigments which are the photoreceptors of light energy in photosynthesis. These pigments belong to the tetrapyrrole family of organic compounds.

Five closely related chlorophylls, designated a through e, occur in higher plants and algae. The principal chlorophyll (Chl) is Chl a, found in all oxygen-evolving organisms; photosynthetic bacteria, which do not evolve O2, contain instead bacteriochlorophyll (Bchl). Higher plants and green algae contain Chl b, the ratio of Chl b to Chl a being 1:3. Chlorophyll c (of two or more types) is present in diatoms and brown algae. Chlorophyll d, isolated from marine red algae, has not been shown to be present in the living cell in large enough quantities to be observed in the absorption spectrum of these algae. Chlorophyll e has been isolated from cultures of two algae, Tribonema bombycinum and Vaucheria hamata. In higher plants the chlorophylls and the above-mentioned pigments are contained in lipoprotein bodies, the plastids. See Carotenoid, Cell plastids, Photosynthesis

Chlorophyll molecules have three functions: They serve as antennae to absorb light quanta; they transmit this energy from one chlorophyll to another by a process of “resonance transfer;” and finally, this chlorophyll molecule, in close association with enzymes, undergoes a chemical oxidation (that is, an electron of high potential is ejected from the molecule and can then be used to reduce another compound). In this way the energy of light quanta is converted into chemical energy.

The chlorophylls are cyclic tetrapyrroles in which four 5-membered pyrrole rings join to form a giant macrocycle. Chlorophylls are members of the porphyrin family, which plays important roles in respiratory pigments, electron transport carriers, and oxidative enzymes. See Porphyrin

It now appears that the chlorophyll a group may be made up of several chemically distinct Chl a species. The structure of monovinyl cholorophyll a, the most abundant of the Chl a species, is shown in the illustration. 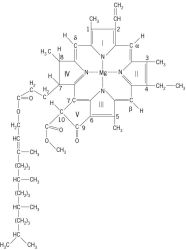 Structure of chlorophyll a (C55H72O5N4Mg)

The two major pigments of protoplasm, green chlorophyll and red heme, are synthesized from ALA (δ-aminolevulinic acid) along the same biosynthetic pathway to protoporphyrin. ALA is converted in a series of enzymic steps, identical in plants and animals, to protoporphyrin. Here the pathway branches to form (1) a series of porphyrins chelated with iron, as heme and related cytochrome pigments; and (2) a series of porphyrins chelated with magnesium which are precursors of chlorophyll. See Hemoglobin

Chlorophylls reemit a fraction of the light energy they absorb as fluorescence. Irrespective of the wavelength of the absorbed light, the emitted fluorescence is always on the long-wavelength side of the lowest energy absorption band, in the red or infrared region of the spectrum.

the green pigment of plants, by means of which plants capture the energy of sunlight and effect photosynthesis (seePHOTOSYNTHESIS). It is localized in special cell structures—chloroplasts and chromatophores—and is associated with the proteins and lipids of the chloroplast membranes. The basic structural unit of the chlorophyll molecule is a magnesium complex of the porphyrin cycle; the high-molecular-weight alcohol phytol, which is attached to the propionic-acid radical in the IV pyrrole ring, gives chlorophyll the capacity to become fixed in the lipid layer of the chloroplast membranes. 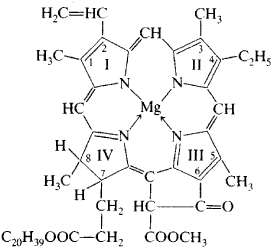 The name “chlorophyll” was given in 1817 by the French chemists P. Pelletier and J. Caventou to a green alcohol solution of a mixture of plant pigments. In the early 20th century, the Russian scientist M. S. Tsvet (Tswett) was the first to distinguish chlorophylls a and b, using the chromatographic method, which he developed. The chemical structure of chlorophyll was elucidated by the German scientists R. Willstátter, A. Stoll (1913), and H. Fischer (1930–40). The complete synthesis of chlorophyll was effected by the American chemist R. Woodward. Chlorophyll’s role in photosynthesis was proved by the classic works of K. A. Timiriazev. The biosynthetic pathways of chlorophyll were elucidated by the American scientists D. Shemin and S. Granick, among others. The Soviet scientists T. N. Godnev and A. A. Shlyk made important contributions to the study of chlorophyll.

The principal biosynthetic pathway of chlorophyll is determined by the condensation of two molecules of δ-aminolevulinic acid with the formation of porphobilinogen—a derivative of pyrrole, which as a result of a series of enzymatic steps yields protoporphyrin IX, a compound containing a porphyrin nucleus. From protoporphyrin is formed the immediate precursor of chlorophyll—protochlorophyllide, which already contains a magnesium atom. Chlorophyll is formed from protochlorophyllide by means of successive reactions of reduction and the addition of phytol. The reduction stage of protochlorophyllide is effected in the light in higher plants and in the dark in lower plants.

In the chloroplasts and chromatophores a large part of the chlorophyll, whose content generally constitutes 0.5 to 1.5 percent of the dry weight, is found in the form of light-gathering “antennae,” while a smaller amount is found in the reaction centers, which participate directly in the photosynthetic electron-transfer chain. Upon absorbing a quantum of light, the chlorophyll molecule enters an excited state (a singlet state of excitation lasts about 10–9 sec), which may then pass to the triplet state, a long-lived excited state lasting as long as 10–3 sec. Chlorophyll molecules excited by light are capable of transferring an electron from a donor molecule to an acceptor molecule.

The mechanisms of these reactions in model systems have been elucidated by the Soviet scientists A. A. Krasnovskii and V. B. Evstigneev, among others. The ability of excited chlorophyll to transfer electrons ensures the functioning of the reaction centers of the photosystems in the photosynthetic electron-transfer chain. The use of techniques involving spectral analysis and low temperatures has shown that in the initial photo stage, the bacteriochlorophyll and possibly the chlorophyll of the active center give up their electron to an acceptor molecule (ubiquinone, ferrodoxin). This initial process is bound to the chain of enzymatic reactions that lead to the formation of reduced pyridine nucleotides and adenosine triphosphate, which ensure the functioning of the carbon cycle. Thus, the light absorbed by chlorophyll is converted to the potential chemical energy of the organic photosynthetic products and molecular oxygen. The light absorbed by chlorophyll also produces other photobiological phenomena in cells; for example, it induces the generation of an electric potential on the membranes of the chloroplasts and influences the movement of unicellular organisms (phototaxis).

Much attention is being focused on the properties of chlorophyll at various levels of molecular organization, inasmuch as these properties are closely related to the fundamental phenomenon of the conversion of light energy to chemical energy in the process of photosynthesis.

[′klȯr·ə‚fil]
(biochemistry)
The generic name for any of several oil-soluble green tetrapyrrole plant pigments which function as photoreceptors of light energy for photosynthesis.
McGraw-Hill Dictionary of Scientific & Technical Terms, 6E, Copyright © 2003 by The McGraw-Hill Companies, Inc.

(US), chlorophyl
the green pigment of plants and photosynthetic algae and bacteria that traps the energy of sunlight for photosynthesis and exists in several forms, the most abundant being chlorophyll a (C55H72O5N4Mg): used as a colouring agent in medicines or food (E140)
Collins Discovery Encyclopedia, 1st edition © HarperCollins Publishers 2005

Feedback
Flashcards & Bookmarks ?
Please log in or register to use Flashcards and Bookmarks. You can also log in with
Flashcards ?
My bookmarks ?
+ Add current page to bookmarks
Mentioned in ?
References in periodicals archive ?
Mean values for color difference (CD), Hue angle, total chlorophyl (TCL, jg [cm.sup.-2]) and total carotenoids (TC, jg [cm.sup.-2]) of 'Ponca' tangerine fruits immediately after harvest (control) and after each time of exposure to ethylene doses.
Ethylene degreening treatment of 'Ponkan' tangerine in the north of the Minas Gerais State, Brazil
The pale green ice cream, covered with a chlorophyl coating, had a strip of chlorophyl jelly inside.
Supermarket of frozen food products served up at SIAL exhibition in Paris
A positive correlation between the contents of chlorophyl a, chlorophyl b and soluble proteins was observed.
On the other hand, we found a positive correlation between antocyanins and chlorophyl a (r= 0.733; p < 0.01) and of antocyanins with proteins (r= 0.799; p < 0.01).
Generally, it was found that the values of chlorophyl b were greater than the values of chlorophyl a for almost all the study period.
A: soluble protein content; B: non-structural carbohydrates content; C: chlorophyl a content; D: chlorophyl b content.
Comportamiento estacional de los metabolitos de Thalassia testudinum (Hydrocharital: Hydrocharitaceae)
Chlorophyl a concentration was calculated using the equation proposed by Talling & Driver (in Vollenweider 1969) without phaeophytins correction.
Distribution of Leptodiaptomus novamexicanus (Copepoda: Calanoida) in a Mexican hyposaline lake