[krō′mad·ə‚graf]
(analytical chemistry)
To employ chromatography to separate substances.
McGraw-Hill Dictionary of Scientific & Technical Terms, 6E, Copyright © 2003 by The McGraw-Hill Companies, Inc.
The following article is from The Great Soviet Encyclopedia (1979). It might be outdated or ideologically biased.

a device for the chromatographic separation and analysis of mixtures. The principal parts of a chromatograph include a system for injecting the sample mixture, the chromatographic column, a detection device (detector), and recording and thermostatic control systems; in addition, preparative chromatographs (including production installations) also feature disassembly fittings and receivers for the separated components.

Chromatographs are classified according to the state of aggregation of the mobile phase as gas and liquid chromatographs. Development chromatography is the method used in the vast majority of cases.

In a gas chromatograph (see Figure 1) the carrier gas is fed continuously from a cylinder through flow and pressure regulators at constant or variable velocity into the chromatographic column (a tube 2–5 mm in diameter and 1–10 m long); the column is filled with a sorbent and placed in a thermostat that makes it possible to maintain a specified temperature (up to 500°C).

Injection of a gas sample (1–50 cm3) or liquid sample (a few microliters) is carried out either manually (with a gas injector or hypodermic needle), or automatically (by means of batchers). The original multicomponent mixture separates in the chromatographic column into a series of two-component mixtures consisting of the carrier gas and one of the components being analyzed. The mixtures enter the detector in a specific sequence that depends on the different adsorption capacities of the components. As a result of the processes that occur in the detector, such as changes in thermal conductivity and ionization flow, a change in the concentration of the effluent components is recorded. Converted into an electrical signal, these processes are recorded as the output curve. 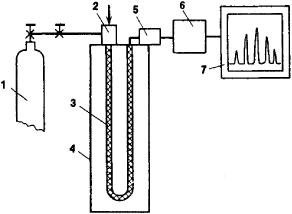 The principal part of ionization detectors is the ionization chamber, where the molecules that enter the chamber with the carrier gas from the chromatographic column are ionized. Ionization of the substances being studied is carried out in a hydrogen flame or by means of metastable argon or helium atoms, slow electrons, and so forth. Under the applied voltage, the ions move in the ionization chamber, creating an electric current. Ionization detectors make it possible to determine concentrations of substances in the range 10–4–10–7 percent.

Thermal conductivity and ionization detectors may be characterized with respect to their sensitivity (the minimum determinable concentration of a substance), selectivity (the ability selectively to determine individual components in a mixture), and the direct dependence of signal on concentration.

In a liquid chromatograph the detecting device may be a flow refractometer connected via a differential circuit or an ultraviolet absorption detector. The mobile phase solvent is fed by means of pulse-free systems (at pressures up to 50 meganewtons per m2, or 500 kg-force per cm2), and sample injection is accomplished with a hypodermic needle or switching valve. The length of the chromatographic column in a liquid chromatograph does not exceed 1 m. On the whole, the detectors of liquid chromatographs have much lower sensitivity (approximately two orders of magnitude) than those used in gas chromatographs. For precise measurement of the concentrations of substances, the detectors are calibrated with respect to mixtures of known composition.