(mōzā`ĭk), art of arranging colored pieces of marble, glass, tile, wood, or other material to produce a surface ornament.

In Egypt and Mesopotamia, furniture, small architectural features, and jewelry were occasionally adorned with inset bits of enamel, glass, and colored stone. Early Greek mosaics (5th–4th cent. B.C.) uncovered at Olynthus were worked in small natural pebbles. The use of cut cubes or tesserae was introduced from the East after the Alexandrian conquest. Roman floor mosaics were probably based upon Greek examples, and glass mosaics applied to columns, niches, and fountains can be seen at Pompeii. In Italy and the Roman colonies the floor patterns were produced both by large slabs of marble in contrasting colors (opus sectile) and by small marble tesserae (opus tessellatum). The tessera designs varied from simple geometrical patterns in black and white to huge pictorial arrangements of figures and animals; examples were found in Rome, Pompeii, Antioch and Zeugma (S Turkey), and N Africa.

In the early centuries A.D. glass mosaics brought color and decoration to the broad walls of the basilicas. By the 4th cent. the triumphal arch between nave and apse and the walls above the nave arcades received mosaic adornment, while the entire domed apse was lined with a mosaic picture, generally of Jesus surrounded by saints and apostles.

In this period Byzantium (later Constantinople) became the center of the craft, which reached perfection in the 6th cent. Hagia SophiaHagia Sophia
[Gr.,=Holy Wisdom] or Santa Sophia,
Turkish Aya Sofia, originally a Christian church at Constantinople (now İstanbul), later a mosque, and now converted into a museum.
..... Click the link for more information.  exhibits glittering gold backgrounds—a special feature of Eastern mosaic art, which later spread to the West. A gold tessera was produced by applying gold leaf to a glass cube and covering it with a thin glass film to protect against tarnishing; for the other tesserae the colors were produced by metallic oxides. The tesserae were set by hand in the damp cement mortar, and the resulting irregularities, causing the facets to reflect at different angles, were an essential factor of effect. In the 5th and 6th cent. RavennaRavenna
, city (1991 pop. 135,844), capital of Ravenna prov., in Emilia-Romagna, N central Italy, near the Adriatic Sea (with which it is connected by a canal). It is an agricultural market, canal port, and an important industrial center.
..... Click the link for more information.  became the Western center of mosaic art, and the Ravenna masterworks (e.g., the decoration of San Vitale), as well as those in Rome, show the Byzantine characteristics of stylized rigidity in the figures.

Through the importation of Greek workmen, a revival took place in Italy in the 11th cent. which lasted into the 13th cent., producing the beautiful mural works of Rome, of Saint Mark's ChurchSaint Mark's Church,
Venice, named after the tutelary saint of Venice. The original Romanesque basilical church, built in the 9th cent. as a shrine for the saint's bones, was destroyed by fire in 967.
..... Click the link for more information.  and Torcello at Venice, and of Palermo, Monreale, and Cefalù in Sicily. Rich medieval marble and mosaic floors with geometric patterns appeared in Italy, Sicily, and the East. In Russia, especially in Kiev, remarkable figural mosaics were set into the walls.

From the 13th cent., mosaic in Italy and Sicily extended to many architectural elements, such as pulpits, bishops' thrones, paschal candlesticks, and the twisted columns of cloisters. These adornments are commonly termed Cosmati work, after the family of Roman artisans especially gifted in their execution. The rise of fresco decoration in the early 14th cent. in Italy superseded mosaic, which then began to deteriorate into mere simulation of painting, although it lingered in Venice, Greece, and Constantinople.

The Gothic revival of the 19th cent. produced some modern attempts, as in Westminster Abbey and the houses of Parliament. In the 20th and 21st cent. the medium has been used with truer understanding of techniques, as in the modernist mosaics for the Stockholm town hall. In modern work the ancient system shares favor with a new method of fastening the tesserae with glue upon a paper cartoon drawn in reverse, applying fairly large sections of this into proper position upon the damp mortar, and then washing away the paper after the mortar has hardened and the tesserae have set.

A process of inlaying small pieces of stone, tile, glass or enamel into a cement or plaster matrix, making a pattern, design, or representational picture.

a representational or nonrepresentational design executed with tesserae of pebbles, smalto, or ceramic tiles. One of the principal genres of monumental decorative art, mosaic is also used to embellish works of the decorative and applied arts. Less frequently, mosaics are in the form of portable pictures. A special type of mosaic work is inlay.

Mosaic work involves affixing pieces of material with simple geometrical or intricate shapes (cut from a pattern) to a surface of lime, cement, mastic, or wax. There are two methods of making mosaics. The direct method involves pressing the tesserae into an adhesive that covers the surface to be decorated. The “reverse” method involves gluing the tesserae face down on a picture drawn on cardboard or cloth and then covering their backs with an adhesive; the temporary base is subsequently removed and the resultant block is mounted on a wall or ceiling.

The most ancient mosaics that have been preserved are ornaments made from small, variously colored clay circles (found in Mesopotamian temples from the third millennium B.C.). Ancient Greek and Roman mosaic work, which was used primarily as floor coverings, evolved from simple nonrepresentational and representational decoration executed in pebbles to elaborate multicolored or black-and-white compositions made with cut stones, inlaid by the direct method, and polished after inlaying (resulting in their characteristic even surface sheen).

Byzantine mosaics, made from smalto and (often semiprecious) stones, were left unpolished in order to achieve a special depth and resonance of color. Mosaics such as those in the Cathedral of St. Sophia in Constantinople, with their glittering surface and abundant use of gold, blended organically with the massive walls and enriched the interior space. Mosaic decoration also flourished in countries where Byzantine traditions were interpreted, for example, in Italy, Georgia (mosaics in the 12th-century Helati Monastery), and ancient Rus’ (llth- and 12th-century mosaics in the Cathedral of St. Sophia and the St. Michael Zlatoverkhii Monastery in Kiev).

Western European Romanesque mosaics for the most part are purely ornamental. Beginning with the 13th century, tendencies toward a more realistic depiction of the world gradually led to the replacement of mosaics by paintings. In Italy in the 16th century there developed what are known as Florentine mosaics. Made from polished colored stones, they were used to adorn interiors and furniture. Mosaics executed entirely in smalto, which first become popular in the 17th century, imitate the effects of oil painting.

In Islamic countries, as well as in medieval Spain and Portugal, colorful glazed-tile mosaics developed in the 13th and 14th centuries. In these mosaics the pieces, which are cut according to patterns, form intricate arabesques that are subordinated to the architecture. The best examples of 14th- and 15th-century Middle Asian mosaics include the facings of building portals in Samarkand and Bukhara and the domes of the Tiurabekkhanym mausoleum near Kunia-Urgench.

In Russia the technique of smalto mosaic was revived in the 18th century by M. V. Lomonosov, under whose supervision portable portraits and battle scenes were executed in mosaic. In 1864 a department for the preparation of mosaics for St. Isaac’s Cathedral was organized by the St. Petersburg Academy of Arts.

Artists and craftsmen working in the art nouveau and national-romantic styles (for example, the Spaniard A. Gaudí, the Austrian G. Klimt, and the Russian artists V. M. Vasnetsov and M. A. Vrubel’) frequently used tile mosaics.

In contemporary mosaics, whose component pieces are usually large, compositions based on combinations of bold patches of local color predominate (works by R. Guttuso, F. Leger, D. Rivera, D. Siqueiros, and H. Erni). The art of mosaic has particularly flourished since the 1930’s as the result of growing interest in problems dealing with the synthesis of the arts. Among works by artists of the older generation, the best known were the smalto mosaics of A. A. Deineka and P. D. Korin, as well as the “Florentine” mosaics of G. I. Opryshko. Since the 1960’s, A. V. Vasnetsov, V. V. Mel’nichenko, D. M. Merpert, B. P. Miliukov, A. F. Rybachuk, B. A. Tal’berg, B. P. Chernyshev, and V. B. El’konin have produced striking examples of furniture decorated with mosaic.

[mō′zā·ik]
(biology)
An organism or part made up of tissues or cells exhibiting mosaicism.
(electronics)
A light-sensitive surface used in television camera tubes, consisting of a thin mica sheet coated on one side with a large number of tiny photosensitive silver-cesium globules, insulated from each other.
(embryology)
An egg in which the cytoplasm of early cleavage cells is of the type which determines its later fate.
(petrology)
Pertaining to a granoblastic texture in a rock formed by dynamic metamorphism in which the boundaries between individual grains are straight or slightly curved. Also known as cyclopean.
Pertaining to a texture in a crystalline sedimentary rock in which contacts at grain boundaries are more or less regular.
(science and technology)
A surface pattern made by the assembly and arrangement of many small pieces. 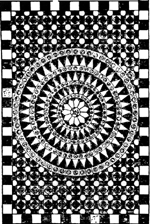 mosaic, 1
1. A pattern formed by inlaying small pieces of stone, tile, glass, or enamel into a cement, mortar, or plaster matrix.
2. A form of surface decoration, similar to marquetry, but usually employing small pieces or bits of wood to create an inlaid design.

1. a design or decoration made up of small pieces of coloured glass, stone, etc.
2. the process of making a mosaic
3. Genetics another name for chimera
4. a light-sensitive surface on a television camera tube, consisting of a large number of granules of photoemissive material deposited on an insulating medium

, Mosaical
of or relating to Moses or the laws and traditions ascribed to him

Mosaic has been described as "the killer application of the 1990s" because it was the first program to provide a slick multimedia graphical user interface to the Internet's burgeoning wealth of distributed information services (formerly mostly limited to FTP and Gopher) at a time when access to the Internet was expanding rapidly outside its previous domain of academia and large industrial research institutions.

NCSA Mosaic was originally designed and programmed for the X Window System by Marc Andreessen and Eric Bina at NCSA. Version 1.0 was released in April 1993, followed by two maintenance releases during summer 1993. Version 2.0 was released in December 1993, along with version 1.0 releases for both the Apple Macintosh and Microsoft Windows. An Acorn Archimedes port is underway (May 1994).

Marc Andreessen, who created the NCSA Mosaic research prototype as an undergraduate student at the University of Illinois left to start Mosaic Communications Corporation along with five other former students and staff of the university who were instrumental in NCSA Mosaic's design and development.

The first multimedia browser for the Web, allowing text, images, sound and video to be accessed via a graphical user interface. Mosaic was created by Marc Andreessen, Eric Bina and others at the University of Illinois National Center for Supercomputing Applications (NCSA).

The "Killer App" of the Web
Mosaic was released on the Internet in 1993 and became "the" application that caused the Web to explode. Originally developed for Unix, it was ported to Windows and Mac within a few months. Both Andreessen and Bina later went to work for Mosaic Corporation, which was formed to market Mosaic, but wound up developing the Netscape browser. The company was renamed Netscape, and the Netscape browser reigned supreme for a while.