[′krä‚nak·sē]
(physiology)
The time interval required to excite a tissue by an electric current of twice the galvanic threshold.
McGraw-Hill Dictionary of Scientific & Technical Terms, 6E, Copyright © 2003 by The McGraw-Hill Companies, Inc.
The following article is from The Great Soviet Encyclopedia (1979). It might be outdated or ideologically biased.

the minimum time required for a constant electric current of twice the threshold voltage to excite tissue. The concept of chronaxie was introduced in 1909 by the French physiologist L. Lapicque.

Until the late 19th century, excitability in tissues was determined according to the stimulus threshold. In 1892 the Russian physiologist N. E. Vvedenskii established the importance of time as a factor determining the course of a physiological reaction. The Dutch physicist L. Gorweg (1892) and the French physiologist G. Weis (1901) established experimentally that the magnitude of a stimulus producing excitation in tissues was inversely dependent on the duration of the stimulus’s action and could be expressed graphically by a hyperbola (see Figure 1). The minimum voltage that will produce excitation when applied without time limitation, that is, the rheobase, corresponds in the figure to the segment OA (BC). The minimum effective time of action of the threshold stimulus corresponds to the segment OC; this time of action is termed effective because any further increase in the current’s time of action has no effect on the origin of the action potential. 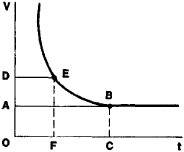 In the case of brief stimuli, the intensity-time curve becomes parallel to the ordinate axis, that is, excitation does not occur regardless of the intensity of the stimulus. The asymptotic approach of the curve to a line parallel to the abscissa makes it impossible to determine the effective time with sufficient accuracy. This is because insignificant deviations in the rheobase that reflect changes in the functional state of the biological membranes at rest are accompanied by significant fluctuations in the duration of the stimulus. Lapicque consequently proposed measuring another conventional magnitude, the chronaxie—that is, a duration of the stimulus equal to twice the rheobase; in Figure 1 this corresponds to the segment OD (EF). At a given magnitude of the stimulus, the minimum time of the stimulus’s action that produces a threshold effect is equal to OF. It has been established that the shape of the curve representing the excitability of tissue in relation to the intensity and duration of a stimulus is similar in highly diverse tissues. The differences among such tissues are meaningful only in relation to the absolute values of the corresponding magnitudes, and primarily to that of time; that is, excitable tissues differ from one another in terms of the time constant of stimulation.

The chronaxie of excitable tissues varies; it is less prolonged in nerves than in skeletal muscles. Among the different types of muscle tissue, skeletal striated muscles have the briefest chronaxie. The chronaxie of the heart muscle is more prolonged, and that of the smooth muscles is the most prolonged. The measurement of chronaxie by means of chronaximetry was formerly a common means of studying man’s locomotor activity.