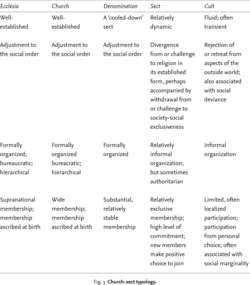 The developmental sequence involved in this typology shows that new cults and sects always tend to appear. Sects in particular can be seen as the dynamic element in religious organization, demanding high commitment from their members and capable of leading to rapid religious, and also in some cases, political and economic change (see PROTESTANT ETHIC). Of course, many sects and cults simply fail to develop and often wither and disappear. When they survive and grow, however, the tendency in the long run is for them to become more formally organized, more bureaucratic and more hierarchical, and, ultimately, more conservative. In doing so they then pose less of a challenge to, and even become part of, the mainstream of society – the prize, but also the penalty, of success.

While the conceptions involved in the church-sect typology work well enough as ideal types in the discussion of most Western forms of religion, reflecting as they do mainly Christian patterns of religious organization, they are less useful in relation to non-Western religions. See also NEW RELIGIOUS MOVEMENTS.

Feedback
Flashcards & Bookmarks ?
Please log in or register to use Flashcards and Bookmarks. You can also log in with
Flashcards ?
My bookmarks ?
+ Add current page to bookmarks
Mentioned in ?
References in periodicals archive ?
In light of the church-sect typology, concluding that, however it is classified, Messianic Judaism is still a highly controversial topic for both Christians and Jews.
In order to try to place Messianic Judaism within the broader context of American religion, this author reviewed the literature on church-sect typology, a way of identifying differences among religious groups that was given its fullest early conceptualization by Ernst Troeltsch but was introduced into sociology by his teacher Max Weber and has since been used, expanded, and criticized by numerous sociologists.
Troeltsch, in his 1912 book, The Social Teaching of the Christian Churches, established a church-sect typology that differentiates between two types of religious organizations but claims that both types are the logical results of the gospel.
Milton Yinger, in The Scientific Study of Religion (1970), greatly expanded the church-sect typology by characterizing religious organizations by three variables: (1) inclusiveness of the religious structures, (2) the extent of alienation from societal values, and (3) the extent of organization, complexity, and distinctiveness of the religious structures.
Rodney Stark and William Sims Bainbridge in a 1979 article criticized the traditional church-sect typology for theoretical reasons.
MESSIANIC JUDAISM: CHURCH, DENOMINATION, SECT, OR CULT?