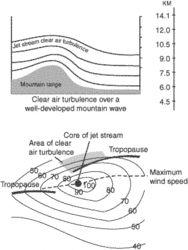 Turbulence in clear air, which is not a result of the presence of clouds or thermal heating of the ground. It appears to arise from an internal function of the atmosphere resulting from wind shear and perhaps temperature shear. Clear-air turbulence is generally associated with jet streams, although it can occur at lower levels and outside the jet streams. Clear air turbulence may also be experienced above the mountain waves and thunderstorms.
An Illustrated Dictionary of Aviation Copyright © 2005 by The McGraw-Hill Companies, Inc. All rights reserved