crown, circular head ornament, symbolizing sovereign dignity. (For crowns worn by nobles, see coronet.) The use of the crown as a symbol of royal rank is of ancient tradition in Egypt and the Middle East. In ancient Greece and Rome, however, crowns—sometimes made of leaves—were merely wreaths, awarded to victors in athletic or poetic contests or bestowed on citizens in recognition of an act of public service. The crown as used in medieval and modern times is an elaboration of the diadem and is generally made of metal, often gold inlaid with precious gems. The crown became thoroughly identified with the functions of monarchy, and the term crown is often used in a purely institutional sense, as in crown lands, crown colonies, and crown debt. Among famous crowns of historic interest are the Lombard iron crown, kept at Monza, Italy; the crown of Charlemagne, at Vienna, Austria; and the sacred crown of St. Stephen of Hungary. These are exceptional in that they were used repeatedly over centuries for coronation ceremonies. Most crowns are of recent origin, although the jewels they contain are often taken from older crowns. The ancient crowns of England were destroyed under Oliver Cromwell. There are two crowns used by the British sovereigns: the crown of Edward the Confessor (a much-altered replica of the original crown) is used for the coronation ceremony in Westminster Abbey, and the imperial state crown is worn on state occasions. Crowns are also worn by the consorts and families of sovereigns. The triple crown of the popes, known as a tiara, dates from the 14th cent. Regardless of their actual shape, crowns are usually represented in heraldry as closed at the top by four arched bars called diadems and surmounted by a globe and a cross. In religion and art, a crown symbolizes sovereignty (Rev. 19.12) and also honor, especially the reward of martyrdom (Heb. 2.9).
The Columbia Electronic Encyclopedia™ Copyright © 2022, Columbia University Press. Licensed from Columbia University Press. All rights reserved.

Any uppermost or terminal features in architecture; the top of an arch including the keystone; the corona of a cornice, often including the elements above it.

the aboveground (above the bole) branched part of a tree. Under natural conditions different tree species have crowns of different shapes. 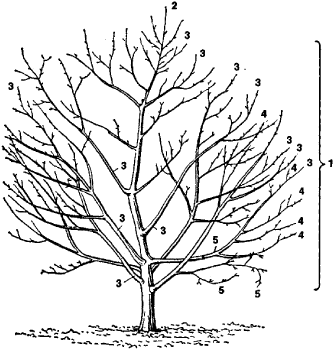 Figure 1. Diagram of the structure of the crown of a fruit tree

The vegetative shoots are one-year-old branches covered with leaves, also called growths, or leading shoots, since they increase the length of the branches every year and, thus, the size of the crown. The fruit shoots of seed-bearing trees consist of one-year-old growths more than 15 cm long with a flower bud at the apex; straight one-year-old lateral growths, 5–15 cm long; very short annual growths, 2 mm to 2–3 cm long, very fragile, with one well-formed leaf or flower bud; shoots usually 2–3 years old that bore fruit at one time; and perennial forked fruit branches. Amygdalaceous trees have fruit shoots called bouquet twigs (shortened fruit formations, 0.5–3 cm long, with groups of buds at the apex) and spurs (short fruit formations from 0.5 to 8–10 cm long).

There are artificial and natural crowns, and they are shaped taking into consideration their natural peculiarities. Depending on the species of tree, the variety, stock, age, and growth and agrotechnical conditions, crowns are given pyramidal, spherical, spreading, and other shapes. These shapes do not impede soil cultivation in the orchard, permit the fruit to grow well, and ensure the best access to air and light. In decorative horticulture, crowns are given round, spherical, and other shapes. The shaping of tree crowns is begun at an early age.

(1) Headgear symbolizing monarchical authority. Crowns were generally made of precious metal (usually gold) and richly decorated with jewels and pearls. There could be a variety of forms, including tiaras, diadems, caps, wreaths, and circlets with attached leaves, spikes, or plates. Crowns were used in the ancient world (Sumer, Akkad, Egypt, Rome), but they became especially widespread in Western Europe during the period of fully developed feudalism (11th century), when a hierarchy of forms, corresponding to the title of the wearer, was established (for emperors, kings, princes, dukes, counts). The crown also appears as a symbol in heraldry.

(2) A term used in the law of certain monarchies to indicate the authority (prerogatives) of the ruler, as well as those persons designated by him and acting in his name in the civil administration, military, or judicial system (the crown court, ministers of the crown, etc.). The term “crown” is especially widespread in English law.

What does it mean when you dream about a crown?

Success, as in “crowned with success” or one’s “crowning achievement.” Leadership. The “jewel in the crown” is what is most valuable.

[krau̇n]
(anatomy)
The top of the skull.
The portion of a tooth above the gum.
(architecture)
A feature near the top of a terminal, such as the highest point of an arch.
(botany)
The topmost part of a plant or plant part.
corona
(civil engineering)
Center of a roadway elevated above the sides.
In plumbing, that part of a trap where the direction of flow changes from upward to horizontal or downward.
(engineering)
The part of a drill bit inset with diamonds.
The vertex of an arch or arched surface.
The top or dome of a furnace or kiln.
A high spot forming on a tool joint shoulder as the result of drill pipe wobbling.
(lapidary)
The portion of a faceted gem above the girdle.
(metallurgy)
That part of the sheet or roll where the thickness or diameter increases from edge to center.
(mining engineering)
A horizontal roof member of a timber up to 16 feet (4.9 meters) long and supported at each end by an upright.
McGraw-Hill Dictionary of Scientific & Technical Terms, 6E, Copyright © 2003 by The McGraw-Hill Companies, Inc.

crown, 9
1. Any upper terminal feature in architecture.
2. The top of an arch including the keystone, or of a vault.
3. The corona of a cornice, sometimes including elements above it.
4. The camber of a beam.
5. The central area of any
McGraw-Hill Dictionary of Architecture and Construction. Copyright © 2003 by McGraw-Hill Companies, Inc.

a stevedore who deals with people by physical force. [Am. Lit.: Porgy, Magill I, 764–766]
See: Brutality
Allusions—Cultural, Literary, Biblical, and Historical: A Thematic Dictionary. Copyright 2008 The Gale Group, Inc. All rights reserved.

1. monarchy or kingship
2.
a. History a coin worth 25 pence (five shillings)
b. any of several continental coins, such as the krona or krone, with a name meaning crown
3. the centre part of a road, esp when it is cambered
4. Botany
a. the leaves and upper branches of a tree
b. the junction of root and stem, usually at the level of the ground
c. another name for corona
5. Zoology
a. the cup and arms of a crinoid, as distinct from the stem
b. the crest of a bird
6. Dentistry
a. the enamel-covered part of a tooth above the gum
b. artificial crown a substitute crown, usually of gold, porcelain, or acrylic resin, fitted over a decayed or broken tooth
7. Nautical the part of an anchor where the arms are joined to the shank
8. Architecture the highest part of an arch or vault

1. the sovereignty or realm of a monarch
2.
a. the government of a constitutional monarchy
b. (as modifier): Crown property
Collins Discovery Encyclopedia, 1st edition © HarperCollins Publishers 2005

(dreams)
A crown made of gold and jewels symbolizes power, honor, and status. It could also symbolize an accomplishment or a passage into higher levels of consciousness or spiritual awareness. When interpreting this dream, pay attention to what kind of crown it is and who is wearing it. This dream may be congratulatory, (i. e., esteem for a job well done). Different types of crowns may have varying meanings; for example, Jesus had a crown of thorns and was a martyr. All crowns are circular, and in that way they bring up issues of completeness and wholeness and point to the center of personality.
Bedside Dream Dictionary by Silvana Amar Copyright © 2007 by Skyhorse Publishing, Inc.

Feedback
Flashcards & Bookmarks ?
Please log in or register to use Flashcards and Bookmarks. You can also log in with
Flashcards ?
My bookmarks ?
+ Add current page to bookmarks
Mentioned in ?
References in periodicals archive ?
Any attempt to increase VDO will result in increase in clinical crown height and consequently, an increased CRR.
Validity of crown-to-root ratio as a prognostic tool in clinical practice
Clinical crown lengthening in esthetic areas requires a more reliable and sophisticated diagnostic process and treatment modality selection.
Atraumatic surgical extrusion of complete crown fractured tooth using periotome in esthetic zone: report of three cases
The objective was to determine clinical crowns length, width and width/length ratios of the maxillary anterior teeth and to determine standard of ideal tooth dimensions.
CLINICAL CROWN LENGTH, WIDTH AND THE WIDTH/LENGTH RATIO IN THE MAXILLARY ANTERIOR REGION IN A SAMPLE OF MARDAN POPULATION
(15) Monfeldt I and Zachrison BU: Adjustment of clinical crown height by gingivectomy Following orthodontic space.
Minor periodontal surgical procedures associated with orthodontic treatment
In brief, the clinical crowns of the dog's third and fourth premolars (P3, P4) and the first molars (M1) of the dog's mandibles were beheaded and the roots were worn down and located at the bone crest level [28].
The Root Membrane Technique: Human Histologic Evidence after Five Years of Function
Adhesive cast copings conserved more tooth tissue but were more technique sensitive and time consuming; additionally in young children there are short clinical crowns and large pulps and a child's cooperation might be questionable [William et al., 2006a].
Treatment modalities in children with teeth affected by molar-incisor enamel hypomineralisation (MIH): a systematic review
Clinically the patient presented a deep periodontal pocket in tooth 21 (a) thin biotype and shorter clinical crowns in teeth 13 and 12 (b).
Periodontics, Implantology, and Prosthodontics Integrated: The Zenith-Driven Rehabilitation
Open interdental spaces and elongated clinical crowns due to increased bone loss in alveolar crest may result from periodontal diseases, ridge resorption, surgeries, trauma, and traumatic tooth extraction.
Gingival veneer for esthetic smile
AI patients may experience compromised chewing function due to tooth sensitivity and the short clinical crowns caused by attrition and/or incomplete eruption.
A conservative rehabilitation of amelogenesis imperfecta
Crown lengthening involves the surgical removal of hard and soft periodontal tissues to gain supracrestal tooth length, allowing for clinical crowns and reestab- lishment of the biological width.12 Crown lengthening has been described as a procedure similar to an apically repositioned flap with ostectomy/osteoplasty.13 The lengthening procedure is indicated to provide tooth length for caries removal, restoration of the tooth with- out violating the biologic width, restoration retention and aesthetics.14
PERIODONTAL APPROACH TO ESTHETIC DENTISTRY
Altered passive eruption management: Lasers can be used very efficaciously to manage passive eruption problems .when the patients have clinical crowns that appear too short or when they have an uneven gingival line producing an uneven smile, excessive tissue can be easily and quickly removed without the need for blade incisions, flap reflection, or suturing.
Lasers in prosthetics
The patient had relatively long clinical crowns. So it was decided not to involve the incisal edges in the tooth preparation.
Restoration of discoloured teeth with ceramic laminate veneers