electron tube, device consisting of a sealed enclosure in which electrons flow between electrodes separated either by a vacuum (in a vacuum tube) or by an ionized gas at low pressure (in a gas tube). The two principal electrodes of an electron tube are the cathode and the anode or plate. The simplest vacuum tube, the diode, has only those two electrodes. When the cathode is heated, it emits a cloud of electrons, which are attracted by the positive electric polarity of the anode and constitute the current through the tube. If the cathode is charged positively with respect to the anode, the electrons are drawn back to the cathode. However, the anode is not capable of emitting electrons, so no current can exist; thus the diode acts as a rectifier, i.e., it allows current to flow in only one direction. In the vacuum triode a third electrode, the grid, usually made of a fine wire mesh or similar material, is placed between the cathode and anode. Small voltage fluctuations, or signals, applied to the grid can result in large fluctuations in the current between the cathode and the anode. Thus the triode can act as a signal amplifier, producing output signals some 20 times greater than input. For even greater amplification, additional grids can be added. Tetrodes, with 2 grids, produce output signals about 600 times greater than input, and pentodes, with 3 grids, 1,500 times. X-ray tubes maintain a high voltage between a cathode and an anode. This enables electrons from the cathode to strike the anode at velocities high enough to produce X rays. A cathode-ray tube can produce electron beams that strike a screen to produce pictures, as in some oscilloscopes and older television displays. Gas tubes behave similarly to vacuum tubes but are designed to handle larger currents or to produce luminous discharges. In some gas tubes the cathode is not designed as an electron emitter; conduction occurs when a voltage sufficient to ionize the gas exists between the anode and the cathode. In these cases the ions and electrons formed from the gas molecules constitute the current. Electron tubes have been replaced by solid-state devices, such as transistors, for most applications. However they are still used in high-power transmitters, specialty audio equipment, and some oscilloscopes. A klystron is a special kind of vacuum tube that is a powerful microwave amplifier; it is used to generate signals for radar and television stations.

In wood-frame construction, a horizontal board connecting and terminating posts, joists, or rafters; a timber laid horizontally on the ground to receive other timbers or joists.
Illustrated Dictionary of Architecture Copyright © 2012, 2002, 1998 by The McGraw-Hill Companies, Inc. All rights reserved
The following article is from The Great Soviet Encyclopedia (1979). It might be outdated or ideologically biased.

[plāt]
(building construction)
A shoe or base member, such as of a partition or other kind of frame.
The top horizontal member of a row of studs used in a frame wall.
(design engineering)
A rolled, flat piece of metal of some arbitrary minimum thickness and width depending on the type of metal.
(electricity)
One of the conducting surfaces in a capacitor.
One of the electrodes in a storage battery.
(electronics)
anode
(geology)
A smooth, thin, flat fragment of rock, such as a flagstone.
A large rigid, but mobile, block involved in plate tectonics; thickness ranges from 30 to 150 miles (50 to 250 kilometers) and includes both crust and a portion of the upper mantle.
(graphic arts)
In etching, the piece of copper, zinc, or other metal that constitutes the base from which prints are made.
In photography, a sheet of glass coated with a sensitized emulsion.
In printing, the reproduction of type or cuts in metal or other material; a plate may bear a relief, intaglio, or planographic printing surface.
(metallurgy)
A thick flat particle of metal powder.
McGraw-Hill Dictionary of Scientific & Technical Terms, 6E, Copyright © 2003 by The McGraw-Hill Companies, Inc. 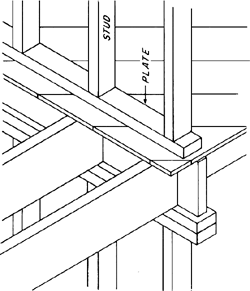 1. any shallow or flat receptacle, esp for receiving a collection in church
2. flat metal of uniform thickness obtained by rolling, usually having a thickness greater than about three millimetres
3. a thin coating of metal usually on another metal, as produced by electrodeposition, chemical action, etc.
4. Photog
a. a sheet of glass, or sometimes metal, coated with photographic emulsion on which an image can be formed by exposure to light
b. (as modifier): a plate camera
5. an orthodontic device, esp one used for straightening children's teeth
6. an informal word for denture
7. Anatomy any flat platelike structure or part
8. any of the rigid layers of the earth's lithosphere of which there are believed to be at least 15
9. Electronics
a. Chiefly US the anode in an electronic valve
b. an electrode in an accumulator or capacitor
10. a light horseshoe for flat racing
11. See plate rail
12. RC Church a flat plate held under the chin of a communicant in order to catch any fragments of the consecrated Host
13. Archaic a coin, esp one made of silver
Collins Discovery Encyclopedia, 1st edition © HarperCollins Publishers 2005