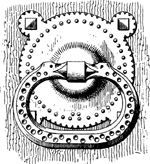 closing ring
A metal ring fastened to a door; used to pull it shut.
McGraw-Hill Dictionary of Architecture and Construction. Copyright © 2003 by McGraw-Hill Companies, Inc.

Feedback
Flashcards & Bookmarks ?
Please log in or register to use Flashcards and Bookmarks. You can also log in with
Flashcards ?
My bookmarks ?
+ Add current page to bookmarks
Mentioned in ?
References in periodicals archive ?
* A silver closing ring, which seals the brush to the paint container and also screws to the bottom of the container while in use.
My Paint Saint Now Available in Select Stores and Online Nationwide - Just in Time for Father's Day
The "closing ring" is designed to install counting sensors on every exclusive incoming road of the network with the assumption that no net balancing flows exist.
Sensor Location Problem for Network Traffic Flow Derivation Based on Turning Ratios at Intersection
At the same time, though, Assad is going to start feeling the effects of the rapidly closing ring around him more intensely.
Who is assisting al-Qaeda, Assad's savior?
Goldenrod's safety chuck line includes the 900/910 series, tilt closing ring models with standard square "U" and "V" socket designs.
Safety chucks
Mischa, who plays a former head-girl in the remake of St Trinian's and stars in the wartime love story Closing Ring, also revealed she missed The OC experience.
the Razz: Mischa: I may quit
South Africa (Berger Closures, Peterlee) - The metal closing ring firm is backing South Africa, since MD Richard Swart hails from Durban.
SWEEPSTAKE LINKS
The closing ring specialist says it now has a foothold in the satellite telecommunications sector supplying companies such as Sony Ericsson and NEC.
Berger Group set to ring changes with new staff
Global operations director Richard Swart, who also runs the North East operation, said the firm currently has County Durham workers at the new factory in China - called Berger Closing Rings - training and supporting the eight new workers at the business, based 80 miles north of Shanghai.
Manufacturer expands into Chinese market