transmission, in automobiles, system of parts connecting the engine to the wheels. Suitable torque, or turning force, is generated by the engine only within a narrow range of engine speeds, i.e., rates at which the crankshaft is turning. However, the wheels must turn with suitable torque over a wide range of speeds. While its speed is held roughly constant, the engine turns an input shaft on the transmission whose output shaft can be adjusted to turn the wheels at an appropriate speed.

The simplest transmissions are manual transmissions, and consist of a system of interlocking gearwheels. These wheels are arranged so that by operating a lever the driver can choose one of several ratios of speed between the input shaft and the output shaft. These ratios are called gears, first gear being the arrangement that gives the lowest output speed, second gear the next lowest, and so forth. To allow smooth shifting from one gear to another, a clutch is provided to disengage the engine from the transmission. The commonly used dry single disk clutch has a steel disk with a friction lining that is sandwiched between a flywheel on the engine shaft and a pressure plate on the transmission input shaft. When the driver takes his foot off the clutch pedal, springs squeeze the friction disk into the space between the flywheel and the pressure plate, enabling the engine shaft to turn the transmission.

The automatic transmission, introduced in 1939, switches to the optimum gear without driver intervention except for starting and going into reverse. The type of automatic transmission used on current American cars usually consists of a fluid device called a torque converter and a set of planetary gears. The torque converter transmits the engine's power to the transmission using hydraulic fluid to make the connection. For more efficient operation at high speeds, a clutch plate is applied to create a direct mechanical connection between the transmission and the engine.

The introduction of microprocessor-controlled electronic sensors has enhanced the performance of automatic transmissions still more. Data about engine speed, exhaust pressure, and other performance characteristics are sent to a processor that controls the changing of gears and the clutch plate in the torque converter via electrical switches, or solenoids. New approaches to transmission design combine the best features of manual and automatic transmissions to provide more efficient ways of channeling engine power to the wheels. A manumatic transmission is an automatic transmission with an added manual-shift mode; typically, a floor-mounted shifter offers an alternative selector path supplemented by buttons mounted on the steering wheel. A continuously variable transmission (CVT) uses a belt that connects two variable-diameter pulleys to provide an unlimited number of ratio changes and uninterrupted power to the wheels; CVT transmissions offer better fuel efficiency than conventional automatic transmissions, which change the transmission ratio by shifting gears. A sequential manual gearbox (SMG), developed for Formula One cars, uses computer-controlled actuators to operate the clutch and change gears when prompted by the driver; both manual and automatic modes are possible, and there is no clutch pedal. The dual clutch transmission (DCT), also called the direct shift gearbox (DSG), substitutes dual clutches for the conventional single-sided clutch to transfer power from the engine through two parallel paths; the gearbox features two sets of gears, identical to those in conventional manual transmissions—one set being the odd gears (1st, 3rd, 5th) and the other the even gears (2nd, 4th, 6th)—the gears must be shifted in sequence, and power to the wheels is never interrupted.

in motor vehicles, a mechanism for transmitting torque from an internal-combustion engine to the vehicle’s transmission. The clutch also makes it possible to disconnect the engine’s crankshaft from the vehicle’s drive shaft for short periods, to shift gears smoothly, and to accelerate the vehicle smoothly from rest.

Clutches are designated as single-plate, twin-plate, or multi-plate types, depending on the number of driven disks. Automotive clutches are usually single-plate or twin-plate types in which the disks are pressed together by springs. In order to facilitate smooth engagement of the clutch and to reduce torsional vibrations in the transmission, flat springs are often mounted between the friction linings of the disks, and the disks are attached to hubs by means of elastic couplings with coal springs. The clutch is disengaged by a pedal to which it is mechanically or hydraulically connected; in heavy-duty vehicles, a servomechanism is used. Disengagement when gears are shifted may be automatic.

Other types of clutches include multiplate clutches running in oil (in motorcycles), clutches that are normally disengaged during operations (in tractors), hydraulic and hydromechanical couplings combined with claw clutches (in motor vehicles), and combination electromagnetic-ferromagnetic couplings (usually in motor vehicles to be used by the handicapped).

[kləch]
(mechanical engineering)
A machine element for the connection and disconnection of shafts in equipment drives, especially while running.
(vertebrate zoology)
A nest of eggs or a brood of chicks.
McGraw-Hill Dictionary of Scientific & Technical Terms, 6E, Copyright © 2003 by The McGraw-Hill Companies, Inc.

A machine element for the connection and disconnection of shafts in equipment drives. If both shafts to be connected can be stopped or made to move relatively slowly, a positive-type mechanical clutch may be used. If an initially stationary shaft is to be driven by a moving shaft, friction surfaces must be interposed to absorb the relative slippage until the speeds are the same. Likewise, friction slippage allows one shaft to stop after the clutch is released.

When positive connection of one shaft with another in a given position is needed, a positive clutch is used. This clutch is the simplest of all shaft connectors, sliding on a keyed shaft section or a splined portion and operating with a shift lever on a collar element. Because it does not slip, no heat is generated in this clutch. Interference of the interlocking portions prevents engagement at high speeds; at low speeds, if connection occurs, shock loads are transmitted to the shafting. Positive clutches may be of the square jaw type (Fig. 1) with two or more jaws of square section meshing together in the opposing clutches, or the spiral jaw type, a modification of the square-jaw clutch that permits more convenient engagement and provides a more gradual movement of the mating faces toward each other. 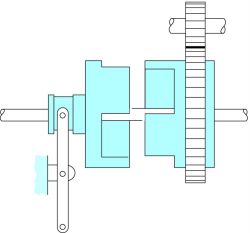 When the axial pressure of the clutch faces on each other serves to transmit torque instead of the mating shape of their parts, the clutch operates by friction. This friction clutch is usually placed between an engine and a load to be driven; when the friction surfaces of the clutch are engaged, the speed of the driven load gradually approaches that of the engine until the two speeds are the same. A friction clutch is necessary for connecting a rotating shaft of a machine to a stationary shaft so that it may be brought up to speed without shock and transmit torque for the development of useful work. The three common designs for friction clutches, combining axial and radial types, are cone clutches (Fig. 2), disk clutches, and rim clutches. In a cone clutch, the surfaces are sections of a pair of cones. The disk clutch consists essentially of one or more friction disks connected to a driven shaft by splines. A rim clutch has surface elements that apply pressure to the rim externally or internally. 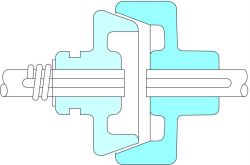 In the overrunning type of clutch, the driven shaft can run faster than the driving shaft. This action permits freewheeling as the driving shaft slows down or another source of power is applied. Effectively this is a friction pawl-and-ratchet drive, wherein balls or rollers become wedged between the sleeve and recessed pockets machined in the hub (Fig. 3). The clutch does not slip when the second shaft is driven, and is released automatically when the second shaft runs faster than the driver. The centrifugal clutch employs centrifugal force from the speed of rotation. This type of clutch is not normally used because it becomes unwieldy and unsafe with increasing size. Clutch action is also produced by hydraulic couplings, with a smoothness not possible with a mechanical clutch. Automatic transmissions in automobiles represent a fundamental use of hydraulic clutches. See Torque converter 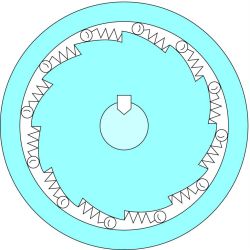 Magnetic coupling between conductors provides a basis for several types of clutches. The magnetic attraction between a current-carrying coil and a ferromagnetic clutch plate serves to actuate a disk-type clutch. Slippage in such a clutch produces heat that must be dissipated and wear that reduces the life of the clutch plate. Thus the electromagnetically controlled disk clutch is used to engage a load to its driving source. See Brake 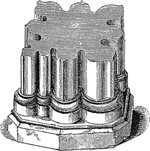 clustered pier
A device which permits the drive train of a machine to be connected to, or disconnected from, a prime source of power; usually operates on a mechanical principle with friction surfaces that can be joined or separated, but other types include a fluid coupler.
McGraw-Hill Dictionary of Architecture and Construction. Copyright © 2003 by McGraw-Hill Companies, Inc.

1
a device that enables two revolving shafts to be joined or disconnected as required, esp one that transmits the drive from the engine to the gearbox in a vehicle

2
a hatch of eggs laid by a particular bird or laid in a single nest
Collins Discovery Encyclopedia, 1st edition © HarperCollins Publishers 2005

Feedback
Flashcards & Bookmarks ?
Please log in or register to use Flashcards and Bookmarks. You can also log in with
Flashcards ?
My bookmarks ?
+ Add current page to bookmarks
Mentioned in ?
References in periodicals archive ?
Multiple clutching in southern spotted turtles, Clemmys guttata.
Reproductive demography of two closely related emydine turtles in a spring fed system
Both clutching and braking components us the same piston, which eliminates simultaneous engagements.
Clutch-brake. (New Products)