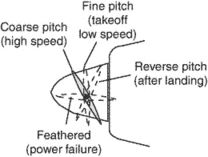 Making a large angle between the blade chord and the plane of the propeller disc, thus producing a high forward speed for a given rotational speed. Unlike at takeoff and landing, when forward air speeds are low and the propeller pitch is fine, the blade angle needs to be increased as the speed increases, or coarsened, for the angle of attack to remain optimum. The change of pitch may be done automatically by a constant speed unit or manually in a variable pitch propeller.
An Illustrated Dictionary of Aviation Copyright © 2005 by The McGraw-Hill Companies, Inc. All rights reserved

Feedback
Flashcards & Bookmarks ?
Please log in or register to use Flashcards and Bookmarks. You can also log in with
Flashcards ?
My bookmarks ?
+ Add current page to bookmarks
Mentioned in ?
References in periodicals archive ?
Tooth pitch - Coarse pitch blades have only a few teeth per inch.
Choosing bandsaw blades
Thin materials require a fine pitch or a greater number of teeth to the inch while thick material is cut most effectively with a coarse pitch or fewer teeth per inch.
Saws cut high production swath