[′kōd·ər]
(communications)
A device that generates a code by generating pulses having varying lengths or spacings, as required for radio beacons and interrogators. Also known as moder; pulse coder; pulse-duration coder.
(computer science)
A person who translates a sequence of computer instructions into codes acceptable to the machine.
McGraw-Hill Dictionary of Scientific & Technical Terms, 6E, Copyright © 2003 by The McGraw-Hill Companies, Inc.
The following article is from The Great Soviet Encyclopedia (1979). It might be outdated or ideologically biased.

a device or circuit for the conversion of information into a signal or an aggregate of signals according to a particular code. Information can be coded only if it is presented in the form of discrete signals. If it is contained in a continuous signal, the signal must first be converted by the coder into a series of discrete signals. Voltages, time intervals between pulses, or linear or angular mechanical displacements are usually coded. The purpose of coding usually is long-distance transmission, improved noise immunity, or conversion of the parameter being measured. All other physical values are usually converted into one of the forms of presentation mentioned above.

Coders are used in automatic control systems and in digital measuring instruments, as well as for recording the parameters being measured. Coding can be accomplished by coding tubes and disks, matrix circuits, or mechanical devices similar to those used in telegraph apparatus.

A cathode-ray coding tube is used for conversion of a continuous electrical signal into a series of successive pulses of a particular code system. Tubes of this type are used in automation, remote control, and computer technology for coding and signal conversion, as well as in television and communications for reduction of the frequency band in the transmission of information. A cathode-ray coding tube functions as a contactless switch in which the luminescent screen is replaced by a special output device. Such a tube consists of three main parts (Figure 1): an electron gun, a deflecting system, and the output device. The first two parts are similar to the corresponding parts of a conventional cathode-ray tube used in oscillographs, television receivers, and so on. Coding and output plates or a collector of secondary electrons whose signals are fed to an electronic amplifier may be used as the output device in such a tube. The operating parameters of the tube and amplifier (horizontal sweep, separation of useful signals, and so on) are determined by a control unit. 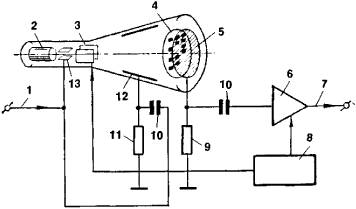 The main distinguishing component of cathode-ray coding tubes is the coding plate, which is a flat metal sheet on which the coding elements, in the form of retangular or (infrequently) other types of slits, are located in an arrangement determined by the coding required. The arrangement of coding elements is chosen such that along the horizontal axis they are located according to the code established for each line, and along the vertical axis perpendicular to the lines they are located according to the coding system and the scale established for amplitude conversion of the input signal voltage.

The principle of operation of a cathode-ray coding tube (for example, in pulse-code modulation) is as follows. Electrons strike the output plate after passing through the apertures of the coding plate. In passing through the coding plate the electron beam generates a series of pulses in the output plate circuit. The code represented by these pulses corresponds to the input signal voltage established for the coding system chosen. Correcting and control devices are used to ensure correct coding of signals that change in real time. The main advantages of tubes are very high conversion speed (up to 106 pulses per sec) and absence of intermediate conversion of the amplitude of a voltage signal to a time interval and absence of special comparing devices used in other coding apparatus for identifying the signal.

Coding disks are used for conversion of angular displacements into a digital, mainly binary, code. Code digits, which correspond to rotation of the shaft through a certain angle, are represented by geometric configurations and are marked on the surface of the disk as concentric tracks (Figure 2). The disk is mechanically connected to a shaft, whose position is coded. Sections or elements of the code tracks are made from corresponding pairs of materials, such as a conductor and dielectric, transparent and opaque substances, or magnetic and nonmagnetic materials, depending on the method of reading the code (contact, photoelectric, electromagnetic, and so on). As the shaft turns, individual sections of the tracks having differing properties are examined by a reading device (a photoelectric cell, magnetic head, or contact brushes); the transition from one section of track to another is equivalent to changing the code at the output of the reading device by one unit in the corresponding digit (the extreme outer track represents the least significant digit of the code). In some cases a drum mounted on the shaft is used instead of the disk. The circuit shown in Figure 3 is an example of a matrix coder. Upon closing any of the switches the signal from a generator is fed to the corresponding input buses of the matrix, which are inductively coupled to output buses. The distribution of signals among the matrix outputs corresponds to the binary code number of the closed switch. 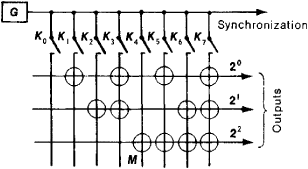 (2) A programmer. Coders can be experienced programmers who create their own logic and write complicated software. However, the term may also refer to a junior level position whereby many programmers each have a small piece of the puzzle and follow a rigid set of specifications. See 10x coder and programmer.

(3) A person who assigns special codes to data. See encode.
Copyright © 1981-2019 by The Computer Language Company Inc. All Rights reserved. THIS DEFINITION IS FOR PERSONAL USE ONLY. All other reproduction is strictly prohibited without permission from the publisher.

Feedback
Flashcards & Bookmarks ?
Please log in or register to use Flashcards and Bookmarks. You can also log in with
Flashcards ?
My bookmarks ?
+ Add current page to bookmarks
Mentioned in ?
References in periodicals archive ?
'CODER observes INEC's lack of attention to the provision of voting access to voters especially the weak.
Voter Participation Certificate, VPC Panacea To Voter Apathy, Says CODER
A uniform method for describing the expertise coders and panelists bring to a study could assist ACEEL researchers in choosing the individuals to serve in the role, while at the same time ensuring consistency, transparency, replicability, rigor, and integrity in research across ACEEL disciplines.
Expert? What does that mean? Describing the Term "Expert" in Agricultural Communications, Education, Extension, and Leadership Research
The One Million Arab Coders initiative is the largest programme of its kind that seeks to train one million young Arabs in computer programming, in order to empower and equip them with the necessary tools and technological insight to face the challenges of the future.
22,000 graduate from One Million Arab Coders initiative
The use of both offshore and domestic coding can avail yourself to coders working in a close to 24-hour-a-day cycle, as you can have coders in more time zones and geography working for you.
Coding quality assurance is universal
Perace concludes that the coder is an easy to use plug and play unit that requires no expert knowledge for installation.
Pyrotec PackMark's intuitive case coding
In lines (2)-(5), when T is not feasible, we find a coder c who can cover at least one uncovered skill of task t and has the lowest c.P/[absolute value of (c.S [intersection] t.S)] value, add c to team T, and update t.S.
Finding Optimal Team for Multiskill Task Based on Vehicle Sensors Data
By following the approach outlined, coders, radiologists, and billing staff train and become knowledgeable with ICD-10.
Preparing for ICD-10
Its product, CODESMART UNIVERSITY is an on- line program of study for existing coders, new coders, clinicians, and healthcare roles of all types.
CODESMART UNIVERSITY RECEIVES APPROVAL FOR CEU
EBCOT Tier I is comprised of two main processing modules: the bit-plane coder (BPC) and the MQ coder [1].
Design and implementation of an embedded NIOS II system for JPEG2000 Tier II encoding
First of all, we combine the RS coder and MIMO channel technology.
Energy-aware adaptive cooperative FEC protocol in MIMO channel for wireless sensor networks
Multiple unit coders, on the other hand, may not be given the time and resources to keep their MDS knowledge and skills current.
Should the MDS department be centralized?
Two of the coders had experience as satellite operators, which added an operations viewpoint to the team's system knowledge.
Successfully taming complex weapons systems software