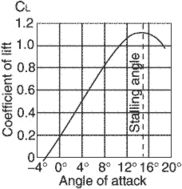 A form in which aerodynamic data is presented. A lift coefficient is dependent upon the angle of attack, shape of the wing section and plan form, condition of the wing surface, Mach number, and Reynolds number. Since most other factors are constant, CL values are plotted against the angle of attack. The value of CL rises up to the stalling angle, where it falls off rapidly. Lift coefficient (CL) = Lift (L)/Dynamic Pressure (q) × Wing Area (S) or CL = L/qS, or 2L/ρ V2S.
An Illustrated Dictionary of Aviation Copyright © 2005 by The McGraw-Hill Companies, Inc. All rights reserved

Feedback
Flashcards & Bookmarks ?
Please log in or register to use Flashcards and Bookmarks. You can also log in with
Flashcards ?
My bookmarks ?
+ Add current page to bookmarks
Mentioned in ?
References in periodicals archive ?
Total Lift Force = Airplane Weight + Tail Down Force 2150 pounds = 2000 pounds + 150 pounds Table 1 Lift Force = Coefficient of Lift * Air Density / 2 * Wing Surface Area * [Airspeed.sup.2] Table 2 CG LOCATION AND SPIN RECOVER
The perils of forward CG: loading your airplane with a forward center of gravity has implications on wing loading, lift and induced drag
[S.sub.l,pl] Shape coefficient of lift 12 t Wave period 1 [t] Average wave period 1 [t.sub.r] Return time 1.14 u Water velocity at the substratum 3 U Maximal water velocity 9 x Breaking force 22 [Chi] Mean breaking force 22 [Alpha] Coefficient of proportionality 2 [Beta.sub.d] Velocity exponent of drag 7 [Beta.sub.l] Velocity exponent of lift 12 [Zeta] Density of water 7 [Tau] Interval of time 1 [Tau.sub.i] Interval of time 1.17 [Tau.sub.tot] Total time 1.10 [Sigma] Standard deviation of breaking force 22
where [Beta.sub.l], is the velocity exponent of lift and [S.sub.l,pl] is the shape coefficient of lift, defined using the object's planform area.
Predicting physical disturbance: mechanistic approaches to the study of survivorship on wave-swept shores
Second, deployed flaps increase the coefficient of lift of the wing and make it more efficient.
Flaps for real: Some enhance, some are a drag, but all perform a specific job depending on their design, application, limitations and how we use them
The resulting yaw brings the left wing forward, decreasing [alpha] and thus bringing it back to the front side of the coefficient of lift curve and increasing lift.
The spin on spins: we're taught to avoid spins, and that's good, but lack of knowledge can be dangerous. Some things you may not know might save your life someday
Aircraft manufacturers, NASA and the de-ice equipment purveyors have done enough research to demonstrate even relatively benign ice accretion--if there is such a concept when it comes to icing--on a wing's leading can reduce the maximum coefficient of lift by as much as 30 percent, according to Dennis Newton's excellent treatise on the subject, Severe Weather Flying.
Icing and tailplane stalls: it's not as simple as flying the approach with your hair on fire. Here's why too much speed is as bad as not enough
There are several useful and well-known kinds of performance curves out there in "Theoryland." Among the first to which we're introduced is the one depicting the steady rise of a dimensionless number called the coefficient of lift with increasing angle of attack, increasing at somewhere around 0.1 per degree up to anywhere between 1.0 and 1.8, and leveling off at this thing called [CL.sub.max], represented as the top-most point of the red line in the chart at right labeled "Lift vs.
Gliding with precision: when your single's engine quits, you become the pilot of a fairly lousy glider. How to make the most of your altitude, the energy source now keeping you aloft
As the angle between the wing chord and the relative wind is increased for a given airfoil, the coefficient of lift increases.
Turning stalls: the relationship between angle of bank and stall speed isn't a mystery, but it is a bit complicated. Here's what's going on, and why