Colosseum or Coliseum (both: kŏləsēˈəm), Ital. Colosseo, common name of the Flavian Amphitheater in Rome, near the southeast end of the Forum, between the Palatine and Esquiline hills. Begun by Vespasian, c.A.D. 75, and completed by his son Titus in A.D. 80, it is the most imposing of Roman antiquities. The vast four-storied oval is 617 ft (188 m) by 512 ft (156 m), much of which is still standing; it had tier on tier of marble seats accommodating c.45,000 spectators. It encloses an arena measuring 250 ft (76 m) by 151 ft (46 m) where gladiatorial combats were held (see gladiators) until 404. According to tradition, persecuted Christians were thrown there to beasts. The Colosseum has been damaged several times by earthquakes.

Any large amphitheater; any large sports arena, open or roofed. 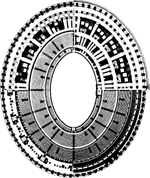