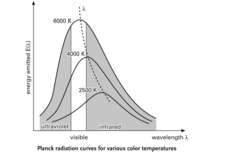 Symbol: T c. The surface temperature of a star expressed as the temperature of a black body (i.e. a perfect radiator) whose energy distribution over a range of wavelengths corresponds to that of the star. It can thus be found by matching the energy distribution in the star's continuous spectrum to that of a black body (given by Planck's radiation law). With increasing temperature the star emits a higher proportion of blue and ultraviolet radiation and the position (wavelength) of maximum radiated energy on the energy distribution curve shifts accordingly; the basic shape of the curve remains unchanged (see illustration). Color temperature is related to color index (B –V) by an approximation of Planck's radiation law:
T c = 7200/[(B –V) + 0.64] kelvin

The temperature to which one would have to heat a “black body” to produce light of similar spectral characteristics. Low color temperature implies warmer (yellow-red) light, and high color temperature implies a colder (blue) light. Daylight has a rather low color temperature near dawn, and a higher one during the day. Therefore an electrical lighting system should supply cooler light to supplement daylight when needed and fill in with warmer light at night. The standard unit for color temperature is Kelvin (K).
Illustrated Dictionary of Architecture Copyright © 2012, 2002, 1998 by The McGraw-Hill Companies, Inc. All rights reserved
The following article is from The Great Soviet Encyclopedia (1979). It might be outdated or ideologically biased.

[¦kəl·ər ¦tem·prə·chər]
(statistical mechanics)
Of a solid surface, that temperature of a blackbody from which the radiant energy has essentially the same spectral distribution as that from the surface.
McGraw-Hill Dictionary of Scientific & Technical Terms, 6E, Copyright © 2003 by The McGraw-Hill Companies, Inc.

Of a light source, the absolute temperature at which a blackbody, 1 radiator must be operated to have a chromacity equal to that of the light source.
McGraw-Hill Dictionary of Architecture and Construction. Copyright © 2003 by McGraw-Hill Companies, Inc.

The color of light, expressed in Kelvins (K). The sun is about 5800 Kelvins. This is called a "temperature," because the hotter fire gets, the more it changes from a warm yellow glow to white.

The lower the Kelvin rating, such as the common incandescent/tungsten bulb, the warmer, softer and more yellow the light. The higher the K number, the cooler, whiter and bluer the light. See white balance.

Feedback
Flashcards & Bookmarks ?
Please log in or register to use Flashcards and Bookmarks. You can also log in with
Flashcards ?
My bookmarks ?
+ Add current page to bookmarks
Mentioned in ?
References in periodicals archive ?
The differences between color temperature settings might be easy to notice in some systems, but the health benefits that many manufacturers claim are more difficult to identify.
Sorting through the Facts and Fiction of Tunable Lighting: Avoid misinformation when considering the prospects of tunable lighting
"Public response following those projects (in other cities) was more positive towards the use of LEDs in the 4,000 (Kelvin) range, which is close to the color temperature of the moonlight," Richardson said.
Eugene evaluating safety of LED lights
KS A 3011 is referred to as the standard for illuminance and lighting environment indexes and Kruithof's curve for color temperature [18].
LED context lighting system in residential areas
We fabricated the color temperature tunable OLED devices by using three blackbody radiation complementary emitters, that is, a red light-emitting iridium complex with heterocyclic ligand (WPRD931, a proprietary material from Wan Hsiang OLED Ltd.), a yellow light-emitting dye, 5, 6, 11, 12-tetra-phenylnaphthacene (rubrene), and a blue light-emitting dye, EB515 (a proprietary blue light-emitting material from e-Ray Optoelectronics Technology Co.
Organic light-emitting diode with color tunable between bluish-white daylight and orange-white dusk hue
"CWF" fluorescent light, lamp with color temperature of 4150 K.
Mathis AG: Worldwide competence in dyeing and coating
The chemical fillings for the first generation of ceramic metal halide lamps usually include sodium iodide, thallium iodide, rare earth iodides, and calcium iodide, depending on the desired color temperatures. These lamps provide excellent color consistency, high color rendering properties, and long life.
Energy saving ceramic metal halide lamps suitable for probe-start and pulse-start systems
The exposures were saved in RAW format so that the color temperature could be measured when the files were examined on a computer.
Shadow play: a clever amateur takes the temperature of the shadow cast by the moon during a total lunar eclipse
"If they get it home and the color temperature is too low, they may hate the light it produces," she says.
Watt's the story? Energy-efficient lighting comes of age
This book provides an in-depth treatise on the subject of color as a resource for artists working in traditional picture-making media, This includes a full explanation of the main color properties of pigment color, including opacity, transparency, color temperature, intensity, and value.
Color Mixing Bible
In addition, proper color temperature is important: Fluorescent lighting at 3,500 degrees Kelvin is ideal.
Space planning for video teleconferencing facilities. (Energy Resources & Management)
However, despite this basic similarity, the light sources differ in color temperature, as measured in degrees Kelvin.
AOI: Do You Need Color? -- Black-and-white AOI systems may offer distinct advantages in viewing components and boards
The CL-200 Light Source Chroma Measurement System from Minolta Corp.'s Instruments Div., Ramsey, N.J., can measure tristimulus colorimetrics, chromaticity, color difference, and both color temperature and illuminance of light sources.
Portable Colorimeter Measures Illuminance, Too