rose, common name for some members of the Rosaceae, a large family of herbs, shrubs, and trees distributed over most of the earth, and for plants of the genus Rosa, the true roses.

Although some groups of these plants are sometimes classed as separate families, most botanists consider them all to be a single family that represents a natural phylogenetic classification, i.e., most or all members have evolved from common ancestors. The largest of the approximately 110 genera (comprising a total of some 3,100 species) are Rubus (including the raspberry, blackberry, dewberry, loganberry, and other types of bramble), Spiraea (including the bridal wreath, meadowsweet, and hardhack), Rosa (the true roses), Crataegus (hawthorn), and Prunus (including the almond, apricot, blackthorn or sloe, cherry, nectarine, peach, and plum).

Economically the rose family is of enormous importance. It provides numerous temperate fruits including (besides species of Rubus and Prunus) the apple, loquat, medlar, pear, quince, and strawberry. The typically fragrant and beautiful flowers make many members of the family prized as ornamentals, e.g., the fruit trees and bushes mentioned and also the antelope brush, Christmasberry, mountain ash, pyracantha, and shadbush. Many genera have species that are native wildflowers of the United States; in addition to many of those above are Agrimonia (agrimony), Potentilla (cinquefoil), and Sanguisorba (burnet), which are also sometimes cultivated.

The most popular ornamentals of the family, and among the most esteemed of all cultivated plants, are the true roses. Rosa occurs indigenously in the north temperate zone and in tropical mountain areas, usually as erect or climbing shrubs with five-petaled fragrant flowers. Sometimes the foliage also is fragrant, as in the European sweetbrier, or eglantine. From many of the wild species have been developed the large number of cultivated varieties and hybrids having single or double blossoms that range in color from white and yellow to many shades of pink and red. Since many species are highly variable and hybridize easily, the classification of Rosa is sometimes difficult, and the wild type of some modern forms is not always known.

The rose has been a favorite flower in many lands since prehistoric times. It appears in the earliest art, poetry, and tradition. It has been used in innumerable ways in decoration. In ancient times it was used medically—Pliny lists 32 remedies made of its petals and leaves. Formerly it was eaten in salads and conserves. It was sacred to Aphrodite and was a favorite flower of the Romans, who spread its culture wherever their armies conquered. Among the old species are the cabbage rose and the damask rose, both native to the Caucasus; the latter especially is cultivated for the perfume oil attar of roses. The famous roses of England include the white rose that was the emblem of the house of York and the red rose of the house of Lancaster in the Wars of the Roses. The rambler rose, frequently grown on trellises and porches, and the tea and hybrid tea roses are of more recent origin, the result of modern rose culture, which really began when the East India Company's ships brought new everblooming or monthly roses from the Orient. 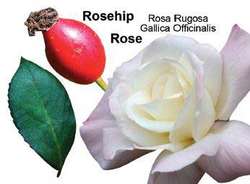