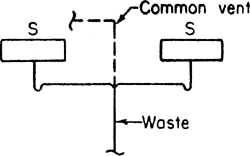 dual vent
In plumbing, a single vent, 1 connected at the junction of two fixture drains, which serves as a vent for both.
McGraw-Hill Dictionary of Architecture and Construction. Copyright © 2003 by McGraw-Hill Companies, Inc.

Feedback
Flashcards & Bookmarks ?
Please log in or register to use Flashcards and Bookmarks. You can also log in with
Flashcards ?
My bookmarks ?
+ Add current page to bookmarks
Mentioned in ?
References in periodicals archive ?
To alleviate that concern, the EPA is making revisions that allow testing of a common vent and that clarify that operators do not have to shut a facility for the sole purpose to test a compressor in its non-operating mode, but that the measurement must be made at the next scheduled shutdown.
Gas/oil industry unhappy with EPA proposed changes to GHG rule
Their common vent is that Hazare should not consider himself superior to Parliament which alone has the right to debate and decide the Lokpal Bill.
PM to meet allies ahead of tomorrow's all-party meet
And they did not contain anhydrite, a common vent chimney mineral that dissolves in seawater at temperatures less than about 150[degrees]C (302[degrees]F).
The remarkable diversity of seafloor vents: continuing explorations reveal an increasing variety of hydrothermal systems
A free-standing vent (5) is used to join several fixtures to a common vent stack, while still allowing the stack to serve as the drain.
Understanding residential plumbing systems
In this study, test data of a hot water boiler and natural draft water heater venting common vented into an exterior masonry laboratory chimney, and subsequent model validation, have highlighted the relative importance of off-cycle flow magnitude over the appliance efficiency.
Simulation and experimental investigation of condensation in residential venting
The ETU200 series tube heater can be common vented for ease of installation or individually direct vented for through-the-roof or side-wall venting.
Infrared heater