, in botany
cone or strobilus (strŏbˈələs), in botany, reproductive organ of the gymnosperms (the conifers, cycads, and ginkgoes). Like the flower in the angiosperms (flowering plants), the cone is actually a highly modified branch; unlike the flower, it does not have sepals or petals. Usually separate male (staminate, or pollen) cones and female (ovulate, or seed) cones are borne on the same plant. Each of the numerous scales, or sporophylls, of the staminate cone bears pollen and each female-cone scale bears ovules in which egg cells are produced. In the pine, a conifer, the staminate cones are small and short-lived; they are borne in clusters at the top of the tree. At the time of pollination, enormous numbers of pollen grains are released and dispersed by wind; those that land accidentally on female-cone scales extend pollen tubes part way into the ovule during one growing season but usually do not reach the stage of actual fertilization until the next year. The cones that are commonly observed are the seed cones, which are normally hard and woody although in a few the scales are fleshy at maturity. The terms strobili and cones are also applied to the comparable and nonseed bearing structures of the horsetails and club mosses.

cone or conical surface, in mathematics, surface generated by a moving line (the generator) that passes through a given fixed point (the vertex) and continually intersects a given fixed curve (the directrix). The generator creates two conical surfaces—one above and one below the vertex—called nappes. If the directing curve is a conic section (e.g., a circle or ellipse) the cone is called a quadric cone. The most common type of cone is the right circular cone, a quadric cone in which the directrix is a circle and the line drawn from the vertex to the center of the circle is perpendicular to the circle. The generator of a cone in any of its positions is called an element. The solid bounded by a conical surface and a plane (the base) whose intersection with the conical surface is a closed curve is also called a cone. The altitude of a cone is the perpendicular distance from its vertex to its base. The lateral area is the area of its conical surface. The volume is equal to one third the product of the altitude and the area of the base. The frustum of a cone is the portion of the cone between the base and a plane parallel to the base of the cone cutting the cone in two parts. 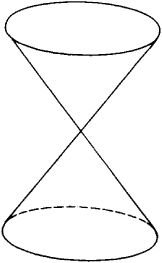 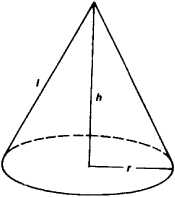 [kōn]
(botany)
The ovulate or staminate strobilus of a gymnosperm.
(engineering acoustics)
The cone-shaped paper or fiber diaphragm of a loudspeaker.
(geology)
A mountain, hill, or other landform having relatively steep slopes and a pointed top.
(histology)
A photoceptor of the vertebrate retina that responds differentially to light across the visible spectrum, providing both color vision and visual acuity in bright light.
(mathematics)
A solid bounded by a region enclosed in a closed curve on a plane and a surface formed by the segments joining each point of the closed curve to a point which is not in the plane.
(metallurgy)
The part of an oxygen gas flame adjacent to the orifice of the tip.
(textiles)
A bobbin on which yarn is wound for weaving.
McGraw-Hill Dictionary of Scientific & Technical Terms, 6E, Copyright © 2003 by The McGraw-Hill Companies, Inc.

Wind cone.
A free-rotating fabric-truncated cone that when subjected to air movement indicates wind direction and wind force. On approach charts, the wind cone is shown as. Also called a cone, sock, or wind sock.
An Illustrated Dictionary of Aviation Copyright © 2005 by The McGraw-Hill Companies, Inc. All rights reserved

1. Maths
a. a geometric solid consisting of a plane base bounded by a closed curve, often a circle or an ellipse, every point of which is joined to a fixed point, the vertex, lying outside the plane of the base. A right circular cone has a vertex perpendicularly above or below the centre of a circular base. Volume of a cone: ⅓πr2h, where r is the radius of the base and h is the height of the cone
b. a geometric surface formed by a line rotating about the vertex and connecting the peripheries of two closed plane bases, usually circular or elliptical, above and below the vertex
2. Botany
a. the reproductive body of conifers and related plants, made up of overlapping scales, esp the mature female cone, whose scales each bear a seed
b. a similar structure in horsetails, club mosses, etc.
3. a small cone-shaped bollard used as a temporary traffic marker on roads
4. Anatomy any one of the cone-shaped cells in the retina of the eye, sensitive to colour and bright light
Collins Discovery Encyclopedia, 1st edition © HarperCollins Publishers 2005