a curve obtained by cutting a right circular cone by planes that do not pass through its vertex. 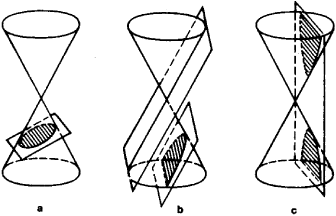 From the standpoint of analytic geometry, conic sections are real irreducible curves of the second degree. When a conic section has a center of symmetry (center), that is, it is an ellipse or hyperbola, its equation can be reduced (by shifting the origin to the center) to the form

Further investigation of these (central) conic sections shows that their equations can be reduced to a still simpler form:

by taking their principal axes (axes of symmetry) as the coordinate axes. If A and B have the same sign (coinciding with the sign of C), then equation (1) defines an ellipse; if A and B have different signs, then the equation defines a hyperbola.

Ancient Greek mathematicians (such as Menaechmus, fourth century B.C.) already knew of the conic sections. Certain construction problems (doubling of a cube, for example) that could not be solved by means of the simplest drawing instruments, such as a compass and straightedge, were solved by means of these curves. In the earliest studies that have come down to us, Greek geometers had obtained conic sections as curves of intersection of a cone and a plane perpendicular to a generator of the cone. Depending on the vertex angle of the cone (that is, the largest angle between the generating rays of one nappe), the curve of intersection proved to be an ellipse if the angle was acute, a parabola if it was a right angle, and a hyperbola if it was obtuse. The most complete treatise devoted to these curves was Conic Sections by Apollonius of Perga (c. 200 B.C.). Further advances in the theory of conic sections are due to the creation of new geometric methods in the 17th century, that of projective geometry (the French mathematicians G. Desarques and B. Pascal) and, particularly, coordinate geometry (the French mathematicians R. Descartes and P. Fermat).

Relative to a suitable coordinate system, the equation of a conic section takes the form

where p and λ are constants. If p λ 0, then this equation defines a parabola when λ = 0, an ellipse when λ < 0, and a hyperbola when λ > 0. The geometric characterization of the conic sections described by the last equation was already well known to ancient Greek geometers and was used by Apollonius of Perga as a basis for assigning the names that are still used for the different types of conic sections. Thus, the term “parabola” (from the Greek parabole) means application (since in Greek geometry the transformation of a rectangle of given area y2 into a rectangle of equal area and with given base 2p is called the application of this rectangle to this base), the term “ellipse” (from the Greek elleipsis) means defect (application with defect), and the term “hyperbola” (from the Greek hyperbole) means excess (application with excess).

In the transition to modern methods of investigation, the stereometric definition of the conic sections was replaced by planimetric definitions of these curves as geometric loci in the plane. For example, an ellipse is defined as the locus of points the sum of whose distances from two given points (foci) has a given value.

Another planimetric definition of conic sections that encompasses all the three types of these curves is possible: A conic section is the locus of points such that the ratio of the distances of any point from a given point (the focus) and a given line (the directrix) is equal to a given positive number (the eccentricity) e. If e < 1, the conic section is an ellipse; if e > 1, it is a hyperbola; and if e = 1, it is a parabola.

Interest in the conic sections has been sustained owing to their occurrence in different phenomena of nature and in human activity. In science, conic sections acquired special importance after the German astronomer J. Kepler, who relied on observations, and the British scientist I. Newton, who relied on theoretical deduction, discovered the laws of planetary motion. One of these laws asserts that the planets and comets of the solar system move along conic sections, at one of whose foci is the sun. The following examples pertain to the different types of conic sections: a projectile or stone thrown at an angle to the horizon traces a parabola (the true form of the curve is somewhat distorted by the resistance of the air); elliptically shaped gears are used in certain mechanisms; the hyperbola serves as the graph of the relation of inverse proportionality that is often observed in nature (for example, Boyle’s law [Marriotte’s law]).

one of a group of curves formed by the intersection of a plane and a right circular cone. It is either a circle, ellipse, parabola, or hyperbola, depending on the eccentricity, e, which is constant for a particular curve e = 0 for a circle; e<1 for an ellipse; e = 1 for a parabola; e>1 for a hyperbola.
Collins Discovery Encyclopedia, 1st edition © HarperCollins Publishers 2005

Feedback
Flashcards & Bookmarks ?
Please log in or register to use Flashcards and Bookmarks. You can also log in with
Flashcards ?
My bookmarks ?
+ Add current page to bookmarks
Mentioned in ?
References in periodicals archive ?
Then the conic section [[GAMMA].sub.0,-2,f] is an ellipse which implies [x.sub.k] is both bounded above and below.
Nonnegative Periodic Solutions of a Three-Term Recurrence Relation Depending on Two Real Parameters
Security Analysis of the Privacy Protection Strategy Based on Conic Section. The security of our strategy can be concluded as follows.
An exact top-k query algorithm with privacy protection in wireless sensor networks
The second part of Problem 1 considers studying Conic sections.
Optimization of the courses in geometry by the usage of Dynamic Geometry Software Sam
Knowledge about conic sections is one of the key content topics of mathematics curriculum in secondary schools.
The development of mathematics education software in China
So, observing once more that consecutive conic sections share a common point, the third shaping equation is obtained from (5) at [[theta].sub.F] = [[theta].sub.Fn-1]:
GO Shaping of Omnidirectional Dual-Reflector Antennas with Arbitrary Main-Beam Direction in Elevation Plane by Connecting Conic Sections
It should be noted that the algebraic expression that refers to all possible parabolas is derived from the general, second-degree equation of the conic sections, a[x.sup.2] + 2hxy + [by.sup.2] + 2gx + 2fy + c = 0.
Parabolas: connection between algebraic and geometrical representations
The process can produce a wide range of both ruled and holographic diffraction gratings, reflective and transmission holographic optical elements, and dual wavelength gratings, as well plano and conic sections. Diffraction gratings are produced in sizes up to 110 mm x 110 mm with groove densities from 40 g/mm to 3600 g/mm, and with available wavelengths from the deep UV to the far.
Optical process reproduces complex surfaces
Students can graph conic sections, then determine and display their characteristics.
Casio: ClassPad 300. (New Products)
Ibn Sinan's treatise "On Sketching Conic Sections and Geometric Transformations" is an excellent example of the symbiosis between theoretical mathematics and astronomers' need for sundials, burning mirrors, and lenses.
Ibrahim ibn Sinan: Logique et geometrie au Xe siecle
This is partly because of their amazing shapes, which seem to have been created from conventional conic sections by the wind.
Making waves
On page 81 (Hypatia's work) students learn that conic sections yield four kinds of curves, but only three are presented (the circle, ellipse, and parabola).
The Scientist Within You: Experiments and Biographies of Distinguished Women in Science
At twelve years of age Pascal discovered Euclid's axioms unaided; at sixteen he wrote a treatise on conic sections, and at eighteen he invented a calculating machine.
Pascal, Blaise