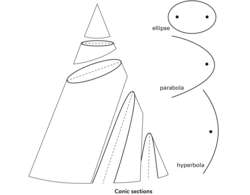 These curves are known as conic sections because they can be obtained by taking sections of a right circular cone at different angles: a horizontal section gives a circle, an inclined one an ellipse, one parallel to the slope of the cone is a parabola, and one with an even greater inclination is a hyperbola (see illustration). Conics are important in astronomy since they represent the paths of bodies that move in a gravitational field. See also orbit.

Circle, ellipse, parabola, and hyperbola; all produced by cutting a plane through a cone at different angles.

Feedback
Flashcards & Bookmarks ?
Please log in or register to use Flashcards and Bookmarks. You can also log in with
Flashcards ?
My bookmarks ?
+ Add current page to bookmarks
Mentioned in ?
References in periodicals archive ?
So, observing once more that consecutive conic sections share a common point, the third shaping equation is obtained from (5) at [[theta].sub.F] = [[theta].sub.Fn-1]:
GO Shaping of Omnidirectional Dual-Reflector Antennas with Arbitrary Main-Beam Direction in Elevation Plane by Connecting Conic Sections
Although we can calculate the next term [[phi].sub.m+2] directly, the conic sections allow us to easily "track" the movements of the points from [mathematical expression not reproducible].
Nonnegative Periodic Solutions of a Three-Term Recurrence Relation Depending on Two Real Parameters
The second part of Problem 1 considers studying Conic sections.
Optimization of the courses in geometry by the usage of Dynamic Geometry Software Sam
It should be noted that the algebraic expression that refers to all possible parabolas is derived from the general, second-degree equation of the conic sections, a[x.sup.2] + 2hxy + [by.sup.2] + 2gx + 2fy + c = 0.
Parabolas: connection between algebraic and geometrical representations
On page 81 (Hypatia's work) students learn that conic sections yield four kinds of curves, but only three are presented (the circle, ellipse, and parabola).
The Scientist Within You: Experiments and Biographies of Distinguished Women in Science
At twelve years of age Pascal discovered Euclid's axioms unaided; at sixteen he wrote a treatise on conic sections, and at eighteen he invented a calculating machine.
Pascal, Blaise
Khayyam states that the solution of this cubic needs the use of conic sections and that it cannot be solved by ruler and compass methods, a result which would not be proved for another 750 years.
Google doodle honors Omar Khayyam
Moreira, "Main-reflector shaping of omnidirectional dual reflectors using local conic sections," IEEE Transactions on Antennas and Propagation, vol.
Shaping Single Offset Reflector Antennas Using Local Axis-Displaced Confocal Quadrics
The authors provide a precalculus review before covering limits, differentiations, the applications of the derivative, the integral, applications of the integral, techniques of integration, advanced applications of the integral and Taylor polynomials, differential equations, infinite series, parametric equations, polar coordinates, and conic sections over the bookAEs eleven chapters.
Single Variable Calculus: Early Transcendentals, 3rd Edition
After reviewing prerequisites, the chapters consider such topics as equations and graphs, exponential and logarithmic functions, matrices and determinants, conic sections, and probability and statistics.
College algebra; hybrid, 6th ed. (online access included)
7 Conic sections cannot be plotted directly with many dynamic geometry software packages, and a conic section only appears as the locus of some point.
The development of mathematics education software in China
Eight pages of "quickies" are followed by 26 pages of more complex problems in the areas of combinatorics and number theory, functions and polynomials, expression and identities, numerical approximation, algebraic inequalities, trigonometric inequalities, geometric inequalities, the triangle, Cevian lines, central symmetry, conic sections, solid geometry, higher dimensions, vectors and matrices, and calculus.
Problems from Murray Klamkin; the Canadian collection