contour or contour line, line on a topographic map connecting points of equal elevation above or below mean sea level. It is thus a kind of isopleth, or line of equal quantity. Contour lines are drawn on maps with a uniform interval of vertical distance separating them (usually 10, 20, 50, or 100 ft on American maps) and thus outline the landform configuration, or relief. They may be visualized as representing shorelines if sea level were raised in small increments. Thus the tops of hills, which would appear as separate islands, are shown as a series of closed circular contours; valleys, which would appear as elongate bays, are shown as contour lines converging toward a point at the head of the valley. Since on steep slopes there is little horizontal distance between points greatly different in height, contour lines indicating such terrain are close together; contour lines of gentle slopes are more widely separated. Maps employing contour lines are called contour, or relief, maps although they are popularly called topographic maps (see topography) in the United States. Certain conventions are employed on these maps to assist the user. Contours indicating land elevations are printed in brown with every fifth contour drawn thicker and labeled with its elevation; those indicating depths of bodies of water are printed in blue. Hachure lines, pointing downslope, are attached to contour lines in order to emphasize a depression with a steep gradient. In the past, contour maps were made from ground surveys. Today they are constructed from stereographic aerial photographs and orbiting satellites, which use radar to measure elevations for land or ocean relief maps. In an analogous way, contour lines are also commonly used to map properties other than elevation; meteorologists, for example, employ contour lines, or isobars, to delineate areas of equal barometric pressures.
The Columbia Electronic Encyclopedia™ Copyright © 2022, Columbia University Press. Licensed from Columbia University Press. All rights reserved. 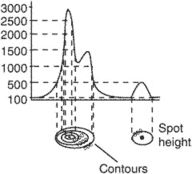 Feedback
Flashcards & Bookmarks ?
Please log in or register to use Flashcards and Bookmarks. You can also log in with
Flashcards ?
My bookmarks ?
+ Add current page to bookmarks
Mentioned in ?
References in periodicals archive ?
(1997) evaluated the quality of DEM results derived from digital contour lines using different algorithms.
Algoritmo para la generacion de Modelos Digitales de Elevacion considerando lineas de contorno y caracteristicas geomorficas
This is my favourite face shape to contour and highlight.
Contouring and highlighting
The addition of Contour to Acal's cabling capability will more than double the group's revenues in this technology area.
Acal Acquires UK Cabling and Connector Supplier Contour for GBP 17m
As was found in [5,6], the mass of the active part of the proton (the mass of its quark) enrolled into a circulation contour having a quantum contour parameter [n.sub.y] answers the relation [m.sub.k] = [c.sup.2/3.sub.0]/[(a[n.sub.y]).sup.2].
On the deviation of the standard model predictions in the large Hadron Collider experiments
Automatic identification of contour lines on scanned topographic maps has been a hot issue, and a great number of related literatures have been published recently.
Identification of Contour Lines from Average-Quality Scanned Topographic Maps
The kids love this analogy and it forces them to remember to not lift their drawing pencil and focus on making their contour lines continuous.
Lesson 3 of 10: contour studies
Marching cubes algorithm is a method for generating standard defined elements and contour surfaces within elements.
Optimization of reconstruction of 2D medical images based on computer 3D reconstruction technology
Previous to joining Contour, Lysenko was the director of worldwide reseller operations at Apple.
A new point of view: contour cameras revived in provo
"Keep a clean, spare tanning mitt handy to buff each contour, and use a beauty blender for smaller areas."
Glow with the flow and learn the secrets of the perfect self-tan
"I am really honoured and delighted to bring Nouveau Contour to India.
Shagun Gupta introduces Nouveau Contour 'Future of Permanent Cosmetics' in India
Under the agreement, the JSSI Parts & Leasing parts procurement staff will support all part requests for Contour's business jets, from the initial request through to ensuring on-time delivery.
JSSI Parts & Leasing, Contour Aviation sign supply chain services agreement
By the 1880s, the bags had fully beaded backgrounds done in the contour style.
Beaded Bags from Columbia River Plateau: The Evolution of An Art Form