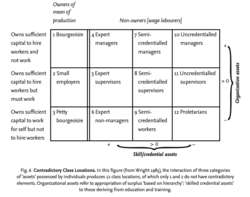 Fig. 6 Contradictory Class Locations. In this figure (from Wright 1985), the interaction of three categories ofassets’ possessed by individuals produces 12 class locations, of which only 1 and 2 do not have contradictory elements. Organizational assets refer to appropriation of surplus ‘based on hierarchy’: ‘skilled credential assets’ to those deriving from education and training.

non-polarized class locations’, i.e. ‘class locations within capitalism that are neither exploiters nor exploited’ (Wright, 1985.1989). As such, these are broadly equivalent to the Marxian conception of INTERMEDIATE CLASSES OR INTERMEDIATE STRATA, but these are given greater systematization by Wright, who seeks to provide a theory of potential ‘class alliances’ on this basis. The chief addition in Wright's analysis, compared with earlier ones, is that he takes into account what he terms ‘organizational assets’ and ‘skill assets’ (e.g. educational credentials) as well as more conventional ‘assets in the means of production’. Twelve main class locations are identified in this way (see Fig. 6). Wright examines empirical variations in political attitudes in terms of these schema, although some critics have argued that his approach is ‘over-formalistic and classificatory’.
Collins Dictionary of Sociology, 3rd ed. © HarperCollins Publishers 2000

Feedback
Flashcards & Bookmarks ?
Please log in or register to use Flashcards and Bookmarks. You can also log in with
Flashcards ?
My bookmarks ?
+ Add current page to bookmarks
Mentioned in ?
References in periodicals archive ?
These range from Carchedi's relatively tight definition of the new middle class as those who perform the global function of capital, without owning the means of production (essentially managers and supervisors); through the Ehrenreichs' 'Professional-Managerial Class'; to Wright's own understanding of the new middle class as a compound of two 'contradictory class locations', occupied by managers and supervisors on the one hand, semi-autonomous credentialled employees on the other.
We have seen how Wright's theory of the new petit bourgeoisie of salaried employees, as occupying a contradictory class location between classic petit bourgeoisie and proletariat, successfully isolates the distinction between management and expertise; but then flounders through a whole series of unsatisfactory revisions occasioned by a presumed need to reconcile fidelity to Marx--which would ordinarily suggest that non-managerial employees are proletarians--with an intuitive sense that this cannot and must not be so.
Some intellectuals are self*employed petit bourgeois, who will use their credentials to legitimize the services offered for sale by their independent small businesses; others are wage- or salary- earning proletarians, who will use theirs in the collective bargaining process, as a basis for claims to superior conditions of employment and higher wages; others are managers, that is, occupants of a contradictory class location between capital and labour, who will use their credentials to justify claims to authority over intellectual labour, and hence to managerial salaries; some intellectuals are even able to transform their cultural capital into economic capital to the extent that they become capitalists, credentialled employers of credentialled employees.
Class and cultural production: the intelligentsia as a social class *