heating, means of making a building comfortably warm relative to a colder outside temperature. Old, primitive methods of heating a building or a room within it include the open fire, the fireplace, and the stove. In ancient Rome a heating system, called a hypocaust, warmed a building by passing hot gases from a furnace through enclosed passages under the floors and behind the walls before releasing them outside. The principal modern systems that are used to heat a building are classified as warm air, hot water, steam, or electricity. In the warm-air system air, heated in a furnace, rises through warm-air ducts and enters the rooms through outlets, while cooler air in the rooms passes into return ducts that lead back to the furnace. The air circulates through the system by convection, i.e., the tendency of a fluid such as air to rise when warm and sink when cool. In newer buildings the circulation is assisted by a fan. The hot-water system has a boiler for heating the water that is sent through connecting pipes to radiators and convectors, the latter devices being metal enclosures containing hot-water pipes surrounded by metal fins. The circulation is maintained by pumps or, in older buildings, by convection. In the steam-heating system, steam generated in a boiler is circulated by its own pressure (sometimes aided by a vacuum pump) through radiators. There are many kinds of electric heating systems. In one type current is sent through wires into electric resistors that are contained in convectors in rooms. The resistors convert the current into heat. In a radiant panel heating system a room is warmed by heat emitted from wall, floor, or ceiling panels. They are warmed by the circulation of warm air, hot water, or steam or by an electric current in resistors within or behind the panels. Experiments are being made to utilize solar energy for heating buildings. In many large buildings, such as theaters, public libraries, and municipal buildings, the heating, ventilating, and air-conditioning units are combined in one system. In district heating, heat is distributed from a heating plant to buildings in a section (usually commercial) of a city.

[kən′vek·tər]
(engineering)
A heat-emitting unit for the heating of room air; it has a heating element surrounded by a cabinet-type enclosure with openings below and above for entrance and egress of air.
McGraw-Hill Dictionary of Scientific & Technical Terms, 6E, Copyright © 2003 by The McGraw-Hill Companies, Inc. 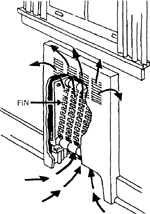 convector
A surface designed to transfer its heat to a surrounding fluid largely or wholly by convection; units for water or steam heating usually are installed against the wall or in a recess in the wall.
McGraw-Hill Dictionary of Architecture and Construction. Copyright © 2003 by McGraw-Hill Companies, Inc.

a space-heating device from which heat is transferred to the surrounding air by convection
Collins Discovery Encyclopedia, 1st edition © HarperCollins Publishers 2005

Feedback
Flashcards & Bookmarks ?
Please log in or register to use Flashcards and Bookmarks. You can also log in with
Flashcards ?
My bookmarks ?
+ Add current page to bookmarks
Mentioned in ?
References in periodicals archive ?
Whilst each model within the range is designed to emit heat quickly, the surface temperature never reaches dangerous levels regardless of the water temperature, making the Grant Solo fan convector radiators safer and an excellent choice for homes with young children or the elderly.
Treat your home to stylish and effective home heating with Grant
Our 1960s vintage house has baseboard convectors on a hot water system.
There are several ways to insulate crawl space De Marne: Who pays?
Product manager at Myson, Andrew Lowery, said: "We are delighted that South Tyneside Homes decided to use our range of fan convectors for these homes and this is a reflection of the high quality we offer, both in terms of product and service.
Renewable energy link-up to help tenants
The convector system was tested in the same test room in which many regular ventilation systems were tested earlier to be able to compare airflow from the convector system with regular ventilation systems at a later stage of this research.
Air distribution in rooms with a fan-driven convector
Diamond commenced his own law suit in Civil Court against the co-op, claiming damages as a result of the negligent installation of the convector. Aa month later, in November 1989, the co-op again served Mr.
Uncertainties in terminating a co-op's proprietary lease
ZENA SAYS: B&Q have a large black cast-iron-effect stove with logs and a convector heater for pounds 99.98.
Looking for a castiron solution to a stove problem; Tricks of the Trade
Meanwhile, Spaniard Ruth, 25, refused to step over the threshold of her dressing room until it had been warmed up with a convector heater.
3am: They've got the Xcess Factor
The two-bedroom home is carpeted throughout and benefits from en-suite facilities, double glazing and electric convector heaters.
TWO-BEDROOM FLAT CLOSE TO CITY CENTRE
Air from the atrium flows back into the offices via a convector. In summer fresh air is drawn through the atrium and rises up it due to the stack effect; offices are ventilated from the core.
Hot property
A ZENA SAYS: Heating specialists Baxi advise that you may need to consider fitting a convector or hotbox.
Depressed by the dust; TRICKS of the TRADE
Newly decorated, the accommodation benefits from suspended ceilings with inset lighting, electric convector heaters and emergency lighting.
Modern units on the outskirts of Leamington Spa; BUSINESS today: COMMERCIAL PROPERTY