corn, in botany. The name corn is given to the leading cereal crop of any major region. In England corn means wheat; in Scotland and Ireland, oats. The grain called corn in the United States is Indian corn or maize (Zea mays mays). The part of the United States where most of the corn is grown, including Ohio, Illinois, Indiana, Missouri, Kansas, Iowa, and Nebraska, is known as the Corn Belt.

The plant is a grass that was domesticated and cultivated in the Americas long before Europeans reached the New World; genetic and archaeological evidence indicates it was first domesticated c.7000 B.C. Corn has dramatically changed from the ancestral wild grass that was its original form, teosinte (Zea species), a tropical American fodder plant in which the seeds are not united in a cob. It has been so adapted to cultivation that it cannot sustain itself without human cultivation. The Native Americans had many varieties of corn, e.g., sweet corn, popcorn, and corn for corn meal. White, yellow, red, and blue corn were grown as distinct strains.

As human food, corn is eaten fresh or ground for meal. It is the basic starch plant of Central and Andean South America, where it is still hand ground on metates to be made into tamales, tortillas, and other staple dishes. In the S United States it is familiar as hominy, mush, and grits. Starch, sugar, and oil are also extracted for many products, but the chief use of corn is as animal fodder. It is the primary feed grain of the United States, and in Europe this is almost the only use of corn. Corn is also as a raw material in the manufacture of ethanol for fuel; some 40% of the U.S. crop is so used. 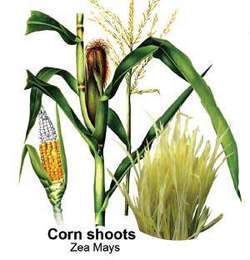 Feedback
Flashcards & Bookmarks ?
Please log in or register to use Flashcards and Bookmarks. You can also log in with
Flashcards ?
My bookmarks ?
+ Add current page to bookmarks
Mentioned in ?
References in classic literature ?
One basket out of every three of corn was theirs, one fish out of every three, one goat out of every three.
Then they told Three-Legs and the other land-owners that they would take their share of corn and roots in money, Little-Belly that they would take their share of fish in money, Pig-Jaw that they would take their share of goats and cheese in money.
He made the first fire-brew out of corn. And thereafter he worked no more, for he talked secretly with Dog-Tooth and Big-Fat and the other masters, and it was agreed that he should be the only one to make fire-brew.
"But what of the goats and the corn and the fat roots and the fish- trap?" spoke up Afraid-of-the-Dark, "what of all this?
View in context
"Why, as thou art an honest fellow and a rich fellow," said the Corn Engrosser, "I mind not thy company; but, in sooth, I have no great fondness for beggars."
"Then forward," quoth Robin, "for the day wanes and it will be dark ere we reach Newark." So off they went, the lean horse hobbling along as before, and Robin running beside, albeit he was so quaking with laughter within him that he could hardly stand; yet he dared not laugh aloud, lest the Corn Engrosser should suspect something.
"Peace, friend," said the Corn Engrosser, "for this is no matter for jesting.
When the Corn Engrosser had told this, Robin broke into a roar of laughter and, laying his hands upon the bridle rein, stopped the sad-looking nag.
View in context
Tom waited till a late hour, to get a place at the mills; and then, moved by the utter weariness of two women, whom he saw trying to grind their corn there, he ground for them, put together the decaying brands of the fire, where many had baked cakes before them, and then went about getting his own supper.
View in context
This further experience also I gained: I said to myself, I will not plant beans and corn with so much industry another summer, but such seeds, if the seed is not lost, as sincerity, truth, simplicity, faith, innocence, and the like, and see if they will not grow in this soil, even with less toil and manurance, and sustain me, for surely it has not been exhausted for these crops.
View in context
He said at dinner that we would not try to reach the cattle-- they were fat enough to go without their corn for a day or two; but tomorrow we must feed them and thaw out their water-tap so that they could drink.
View in context
She did not understand why he spoke with such admiration and delight of the farming of the thrifty and well-to-do peasant Matthew Ermishin, who with his family had carted corn all night; or of the fact that his
View in context