Corona of penis | Article about corona of penis by The Free Dictionary
https://encyclopedia2.thefreedictionary.com/corona+of+penis
Printer Friendly

, city, United States
Corona (kərōˈnə), city (2020 pop. 157,136), Riverside co., S Calif.; inc. 1896. The city developed as a primary citrus fruit producer and shipping center. There is also light manufacturing. The name Corona (“circle”) was derived from the 3 mi (5 km) circular drive around the city that was once used for car racing. State prisons for men and women are nearby. Cleveland National Forest and hot springs lie in the vicinity.

, in astronomy
corona, luminous envelope surrounding the sun, outside the chromosphere. Its density is less than one billionth that of the earth's atmosphere. The corona is visible only at the time of totality during a total eclipse of the sun. It then appears as a halo of light with an irregular outer edge, often with streamers radiating from the sun's surface and contrasting with the dark lunar disk that it borders. It is divided into the inner corona, a ring of pale-yellow light against which crimson prominences are outlined, and the outer corona, a pearly white halo that extends far out into space. The corona consists of ionized gas at a temperature of 1 million℃. By means of the coronagraph, the innermost part of the corona can be studied and photographed in full daylight. Although the visible corona extends a few solar radii above the sun, because of its high temperature it produces a continual flow of electrically charged particles called the solar wind that move outward through the solar system.
The Columbia Electronic Encyclopedia™ Copyright © 2022, Columbia University Press. Licensed from Columbia University Press. All rights reserved.

(kŏ-roh -nă)
1. The extremely tenuous outermost part of a star's atmosphere. The most easily observed corona is that of the Sun.

Optically, the solar corona has two main components: the K-corona (or inner corona) consists of rapidly moving free electrons, exhibits a continuous spectrum, and attains a temperature of around 2 000 000 K at a height of about 75 000 km; the F-corona (or outer corona) consists of relatively slow-moving particles of interplanetary dust, exhibits an absorption spectrum, and extends for many million kilometers into the interplanetary medium. A third component, the E-corona, consists of relatively slow-moving ions and exhibits an emission spectrum superimposed on the continuum of the K-corona.

The white-light corona comprises the overlapping K-corona and F-corona. It is visible under natural circumstances only in profile beyond the Sun's limb on the rare occasions when the photosphere is totally eclipsed by the Moon. It may, however, be observed out to distances of several solar radii at times other than totality, with the aid of a balloon- or satellite-borne externally occulted coronagraph. Similarly, the E-corona may be observed at specific wavelengths with the aid of the Lyot coronagraph, used at certain high-altitude observatories.

The corona may also be observed against the Sun's disk at extreme-ultraviolet and X-ray wavelengths, using rocket- or satellite-borne instrumentation. X-ray observations reveal the structure of the corona at temperatures of several million kelvin. Strong X-ray emission is associated with active regions, and an absence of X-ray emission with coronal holes. There is little or no evidence for a uniform corona – its structure is determined by the strength and configuration of the localized magnetic fields. The X-ray telescopes on Skylab and the Solar Maximum Mission, in particular, provided much additional information on coronal structure (see coronal transients).

The overall shape of the solar corona changes with the phase of the sunspot cycle. At sunspot minimum it is roughly symmetrical, with long equatorial streamers, and plumes orientated in the direction of the Sun's polar magnetic field. At sunspot maximum it is less symmetrical, although more evenly distributed about the Sun's disk as a whole. Its changing shape is due principally to the presence of individual streamers above active regions, the mean heliographic latitude of which progresses toward the equator as the sunspot cycle proceeds. Solar radio emission at meter wavelengths originates in the corona and may exhibit an intense burst or series of bursts at the time of a large flare.

It has been found that in general the coronae of normal stars are sources of X-rays: the X-ray telescope on the Einstein Observatory was able to detect all types of stars apart from red supergiants. The idea that coronae are heated by shock waves rising through the chromosphere from the photosphere (acoustic heating) is now considered untenable, because such heating would occur only in late-type stars like the Sun. Instead, the coronal output is thought to be linked to the star's rotation. In certain binary systems (RS Canum Venaticorum stars and some flare stars) the orbital motion forces the stars to spin rapidly, and they are unusually strong X-ray sources. Young stars, such as those in the Orion nebula or the Pleiades, rotate faster than older stars of the same spectral type; they too have powerful X-ray emitting coronae. The link is almost certainly that fast rotation considerably enhances the magnetic field, and this provides greater heat input to the corona; the details, however, are still obscure.

2. The dark halo of our Galaxy.
3. A surface feature on a planet or satellite, especially Venus. The coronae on Venus are circular features that exceed 300 km in diameter and 0.5 km in elevation, and are surrounded by concentric rings of ridges. Artemis Chasma is the largest corona found so far, 2100 km across, with its outer ring of fractures forming a steep trough about 120 km wide and scarps up to 2.5 km high.
Collins Dictionary of Astronomy © Market House Books Ltd, 2006

The overhanging vertical member of a classical cornice supported by the bed moldings and crowned by the cymatium, usually incorporating a drip.

light, misty rings in the heavens around the disk of the sun or moon and, less frequently, around bright stars and terrestrial light sources. A corona forms when translucent clouds (usually altocumulus) or fog passes in front of the light source; a corona is distinguished from a halo by the former’s smaller radius (not more than 5°). Coronas are explained by the diffraction scattering of rays from the light source on the drops of water that form the cloud or fog. On the basis of the theory of coronas, it is possible to determine the diameter of the drops in clouds according to the observed angular radii of individual rings or the dark spaces that separate them and to discern clouds consisting of water and ice particles. The radii of the rings depend on the wavelength of the rays which cause the coloration of the corona; the outermost ring takes on a reddish color. When drops of all possible sizes are present in the atmosphere, the superimposed corona rings form a general white glow around the disk of the light source; this is called a perihelion aureole.

[kə′rō·nə]
(architecture)
The overhanging vertical member of a cornice.
(astronomy)
solar corona
(botany)
An appendage or series of fused appendages between the corolla and stamens of some flowers.
The region where stem and root of a seed plant merge. Also known as crown.
(electricity)
corona discharge
(geology)
A mineral zone that is usually radial about another mineral or at the area between two minerals. Also known as kelyphite.
(invertebrate zoology)
The anterior ring of cilia in rotifers.
A sea urchin test.
The calyx and arms of a crinoid.
(metallurgy)
An area sometimes surrounding the nugget at the faying surfaces of a spot weld which provides a degree of bond strength.
(meteorology)
A set of one or more prismatically colored rings of small radii, concentrically surrounding the disk of the sun, moon, or other luminary when veiled by a thin cloud; due to diffraction by numerous waterdrops.
(mineralogy)
An annular zone of minerals that is disposed either around another mineral or at the contact between two minerals.
McGraw-Hill Dictionary of Scientific & Technical Terms, 6E, Copyright © 2003 by The McGraw-Hill Companies, Inc. 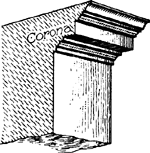 corona
The overhanging vertical member of a cornice, supported by the bed moldings and crowned by the cymatium; usually with a drip to throw rainwater clear of the building. Also see cornice.
McGraw-Hill Dictionary of Architecture and Construction. Copyright © 2003 by McGraw-Hill Companies, Inc.

i. Rims of small radius and of subdued color commonly observed surrounding, and sometimes apparently touching, the solar disc. They are caused by the diffraction of sunlight or moonlight through thin-veiled clouds. When discernible, the colors of shorter wavelengths—blue and green—appear on the inner portion of the corona, with red and orange forming the outer ring—an arrangement just opposite to that in a halo. Coronas vary in size and are much smaller than the fixed size of a halo. Coronas form in clouds, which are composed of water droplets, and halos form in cirriform clouds, which are composed of ice crystals. See also broken specter.
ii. The blue or purple glow that is visible when the voltage on an electrical conductor, such as an antenna or a high-voltage transmission line, exceeds a certain value. This causes ionization of the air around the conductor and the resultant glow.
An Illustrated Dictionary of Aviation Copyright © 2005 by The McGraw-Hill Companies, Inc. All rights reserved

1. a circle of light around a luminous body, usually the moon
2. the outermost region of the sun's atmosphere, visible as a faint halo during a solar eclipse
3. Architect the flat vertical face of a cornice just above the soffit
4. a circular chandelier suspended from the roof of a church
5. Botany
a. the trumpet-shaped part of the corolla of daffodils and similar plants; the crown
b. a crown of leafy outgrowths from inside the petals of some flowers
6. Anatomy a crownlike structure, such as the top of the head
7. Zoology the head or upper surface of an animal, such as the body of an echinoid or the disc and arms of a crinoid
8. a long cigar with blunt ends
9. Physics short for corona discharge
Collins Discovery Encyclopedia, 1st edition © HarperCollins Publishers 2005

(2) (Corona) The code name for Windows Media Player 9, introduced in 2003. It improved the Windows Media Video codec and added the Windows Media Audio Professional codec for 5.1 surround sound at 24 bit, 96 kHz sampling. It also included Fast Stream, providing instant-on audio and video streaming for high-bandwidth connections.
Copyright © 1981-2019 by The Computer Language Company Inc. All Rights reserved. THIS DEFINITION IS FOR PERSONAL USE ONLY. All other reproduction is strictly prohibited without permission from the publisher.