mechanical linkage consisting of a bar attached to a pivot at one of its ends in such a way that it is capable of rotating through a complete circle about the pivot. One of the principal uses of a crank is to turn reciprocating, or back and forth, motion into rotary motion or vice versa. A bell crank is one designed to change the direction of a linear motion.
The Columbia Electronic Encyclopedia™ Copyright © 2013, Columbia University Press. Licensed from Columbia University Press. All rights reserved. www.cc.columbia.edu/cu/cup/
The following article is from The Great Soviet Encyclopedia (1979). It might be outdated or ideologically biased.

the simplest rotating part of a crank mechanism. It has a cylindrical projection, the pin, whose axis is displaced relative to the axis of rotation of the crank by a distance r, which may be fixed or variable (see Figure 1). 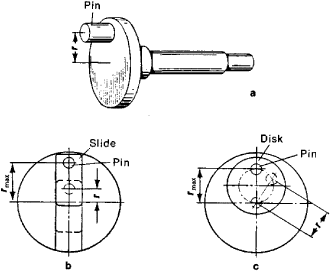 [kraŋk]
(mechanical engineering)
A link in a mechanical linkage or mechanism that can turn about a center of rotation.
McGraw-Hill Dictionary of Scientific & Technical Terms, 6E, Copyright © 2003 by The McGraw-Hill Companies, Inc.

In a mechanical linkage or mechanism, a link that can turn about a center of rotation. The crank's center of rotation is in the pivot, usually the axis of a crankshaft, that connects the crank to an adjacent link. A crank is arranged for complete rotation (360°) about its center; however, it may only oscillate or have intermittent motion. A bell crank is frequently used to change direction of motion in a linkage (see illustration). See Linkage (mechanism) 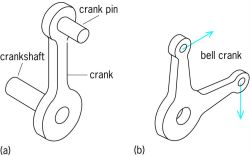 In a mechanical linkage or mechanism, a link that can turn about a center of rotation. The crank's center of rotation is in the pivot, usually the axis of the crankshaft, that connects the crank to the adjacent link. A crank is arranged for complete rotation (i.e., through 360°) about its center; however, it may only oscillate or have intermittent motion. A bell crank is frequently used to change the direction of the motion in a linkage.
An Illustrated Dictionary of Aviation Copyright © 2005 by The McGraw-Hill Companies, Inc. All rights reserved

1
1. a device for communicating motion or for converting reciprocating motion into rotary motion or vice versa. It consists of an arm projecting from a shaft, often with a second member attached to it parallel to the shaft
2. a handle incorporating a crank, used to start an engine or motor

(Automotive slang) Verb used to describe the performance of a machine, especially sustained performance. "This box cranks (or, cranks at) about 6 megaflops, with a burst mode of twice that on vectorised operations."
This article is provided by FOLDOC - Free Online Dictionary of Computing (foldoc.org)

Feedback
Flashcards & Bookmarks ?
Please log in or register to use Flashcards and Bookmarks. You can also log in with
Flashcards ?
My bookmarks ?
+ Add current page to bookmarks
Mentioned in ?
References in periodicals archive ?
Through close observation of the dynamics involved in cocking a crossbow, I was able to design a crossbow crank cocking system requiring but a fraction of the strength needed for direct hand cocking, or even the use of a rope cocking aid.
Crossbow crank cocking system: we find improvements on existing equipment used in shooting and hunting. I recently found one with a crossbow
Then, the crank is not under any bending load and the motors are not subjected to any torque, and that is the reason why inverse singularities are stiffer than others.
Stiffness of parallel manipulators with crank-connecting rod system
IF CRANKS COULD BE TROLLED UNDER THE ICE, THEY WOULD EXCEL THERE, TOO.
Crankbait tech & spec: primary triggering factors
For simulation option chooses clockwise direction for the crank wheel to shift the center of rotation of limb in upper side for lower motion chooses vice versa.
Design of a hybrid mechanism for shoulder joint motion
Ron Sherman Advertising Tele-productions, located in southwest Little Rock and in business for nearly 20 years, thinks it set a record with the amount of commercials it cranked out in 2005, though there's no official way of knowing.
Commercial factory
A simpler concept with the same advantages would be a Scotch yoke system with two contrarotating cranks. (A single crank produces side forces on the piston.) One possible arrangement would consist of two pistons on one side and two on the other side of the yoke (an H configuration) for a simple four-cylinder engine.
Alternative movement
Gabe counted orally, "3, 6, 9, 12," for each crank." I encouraged him to complete a table of values for the 3-spooi to record his interpretations.
Instructional decisions: helping students build links between representations
It has three charging sources for the batteries: built-in solar panel, external DC, and dynamo hand winding crank. Just keep this radio in a sunny window and it will stay charged or turn the hand-crank generator for 1 minute for 10 minutes of radio play.
Solar dynamo radio. (Products for People Who Want to Make a Difference!)
It converts mechanical power into electrical energy by using a specially-designed crank to power a cellular phone directly or charge its batteries.
How to recharge your mobile in the bush. (Products & Processes)
Comedy Central's ambitious campaign to launch the crank-call skein "Crank Yankers" will allow Internet users to crank-call someone with an official "Crank Yankers" message.
Comedy Central turns `Crank' on web promo. (The 411 On Creative Marketing)
Knee position--Your knee should be directly over the pedal when the pedal is forward with the crank horizontal to the ground.
Don't let crosstraining increase your injury risk
It looks just like a conventional lantern-style flashlight except for two things there's no place to insert bat teries, and there's a hand crank on the right side.
You Light Up My Life