[krēp]
(electronics)
A slow change in a characteristic with time or usage.
(engineering)
The tendency of wood to move while it is being cut, particularly when being mitered.
(geology)
A slow, imperceptible downward movement of slope-forming rock or soil under sheer stress.
(graphic arts)
A forward movement of the blanket during offset printing.
(mechanics)
A time-dependent strain of solids caused by stress.
(mining engineering)
squeeze
McGraw-Hill Dictionary of Scientific & Technical Terms, 6E, Copyright © 2003 by The McGraw-Hill Companies, Inc.

The time-dependent strain occurring when solids are subjected to an applied stress. See Stress and strain

Some of the different kinds of creep phenomena that can be exhibited by materials are shown in the illustration. The strain ε = ΔL/L0, in which L0 is the initial length of a body and ΔL is its increase in length, is plotted against the time t for which it is subjected to an applied stress. The most common kind of creep response is represented by the curve A. Following the loading strain ε0, the creep rate, as indicated by the slope of the curve, is high but decreases as the material deforms during the primary creep stage. At sufficiently large strains, the material creeps at a constant rate. This is called the secondary or steady-state creep stage. Ordinarily this is the most important stage of creep since the time to failure tf is determined primarily by the secondary creep rate s. In the case of tension creep, the secondary creep stage is eventually interrupted by the onset of tertiary creep, which is characterized by internal fracturing of the material, creep acceleration, and finally failure. The creep rate is usually very temperature-dependent. At low temperatures or applied stresses the time scale can be thousands of years or longer. At high temperatures the entire creep process can occur in a matter of seconds. Another kind of creep response is shown by curve B. This is the sort of strain-time behavior observed when the applied stress is partially or completely removed in the course of creep. This results in time-dependent or anelastic strain recovery. Creep of materials often limits their use in engineering structures. The centrifugal forces acting on turbine blades cause them to extend by creep. In nuclear reactors the metal tubes that contain the fuel undergo creep in response to the pressures and forces exerted on them. In these examples the occurrence of creep is brought about by the need to operate these systems at the highest possible temperatures. Creep also occurs in ordinary structures. An example is found in prestressed concrete beams, which are held in compression by steel rods that extend through them. Creep and stress relaxation in the steel rods eventually leads to a reduction of the compression force acting in the beam, and this can result in failure. See Prestressed concrete

The mechanism of creep invariably involves the sliding motion of atoms or molecules past each other. In amorphous materials such as glasses, almost any atom or molecule within the material is free to slide past its neighbor in response to a shear stress. In plastics, the long molecular chains can slide past each other only to a limited extent. Such materials typically show large anelastic creep effects (curve B in the illustration).

For crystalline materials, creep deformation also involves the sliding of atoms past each other, but here the sliding can occur only within the cores of crystal dislocations. Thus, creep of metals and ceramics is usually governed by the motion of dislocations.

It is possible to design materials with superior creep resistance. When solute atoms are added to metals, they are attracted to the strain fields of the dislocations. There they inhibit dislocation motion and in this way improve the creep resistance. Many of the aluminum alloys used for aircraft structures are strengthened in this way. The addition of second-phase particles to alloys is another way to improve the creep resistance. The most effective strengthening phases are oxides, carbides, or intermetallic phases, because they are usually much stronger than the host metal and therefore create strong obstacles to dislocation motion. Materials containing finely dispersed, strong particles of a stable phase are usually very creep-resistant. Nickel-based superalloys, used in gas-turbine engines, derive their creep resistance from these effects. See High-temperature materials, Metal, mechanical properties of

1. The continuing, time-dependent part of strain resulting from stress; the permanent and continuing dimensional deformation of a material under a sustained load, following the initial instantaneous elastic deformation.
2. Slow movement of rock debris or soil, usually imperceptible except in observations of long duration.
3. In structures, particularly of concrete, permanent deflection of structural framing or structural decking resulting from plastic flow under continued stress.
4. In roofing, permanent elongation or shrinkage of a roofing membrane resulting from thermal or moisture changes.
5. The flow of water along the interface between a structure and the surrounding soil or rock foundation.
McGraw-Hill Dictionary of Architecture and Construction. Copyright © 2003 by McGraw-Hill Companies, Inc. 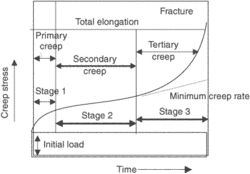 i. The gradual rotation of a tire around a wheel. To detect creeping, white index marks are made on tires and wheels and are called creep marks. Some tires have two molded arrows in between which creep marks are painted.
ii. The property of a metal that allows it to be permanently deformed when subject to stress (e.g., turbine blades that operate at temperatures at which creep can become serious). Creep increases with temperature, duration, and magnitude of force.
Primary creep, stage 1, is a period of decreasing creep rate. Primary creep is a period of primarily transient creep. During this period deformation takes place and the resistance to creep increases until stage 2. Secondary creep, stage 2, is a period of roughly constant creep rate. Stage 2 is referred to as steady state creep. Tertiary creep, stage 3, occurs when there is a reduction in cross sectional area due to necking or effective reduction in area due to internal void formation.
An Illustrated Dictionary of Aviation Copyright © 2005 by The McGraw-Hill Companies, Inc. All rights reserved

Feedback
Flashcards & Bookmarks ?
Please log in or register to use Flashcards and Bookmarks. You can also log in with
Flashcards ?
My bookmarks ?
+ Add current page to bookmarks
Mentioned in ?
References in classic literature ?
'The door is big enough; just look, I can get in myself!' and she crept up and thrust her head into the oven.
View in context
On, yet on, crept the ring of darkness; it was now more than half across the blood-red orb.
View in context
Caption: Figure 11: Fracture surfaces of crept specimens under stresses of 400 MPa (a, b) and 300 MPa (c, d).
Comparison of Creep Properties of Cast and Wrought Haynes 282 Superalloy
But then, the dynamic changed and a subversive element crept in.
San Francisco Butoh Festival. (National: `Dance Of Darkness' Finds Lightness Of Touch)
The drops would have crept at a glacial pace as they did in the experiments 8 years ago, he explains.
New technique makes water droplets sprint
28 Nature, the authors provide evidence that Kimberella had a strong, limpetlike shell, crept along the seafloor, and resembled a mollusk--the phylum that includes snails, clams, and squids.
Ancient animal sheds false identity