refraction, in physics, deflection of a wave on passing obliquely from one transparent medium into a second medium in which its speed is different, as the passage of a light ray from air into glass. Other forms of electromagnetic radiation, in addition to light waves, can be refracted, as can sound waves.

The Nature of Refraction

Refraction is commonly explained in terms of the wave theory of light and is based on the fact that light travels with greater velocity in some media than it does in others. When, for example, a ray of light traveling through air strikes the surface of a piece of glass at an oblique angle, one side of the wave front enters the glass before the other and is retarded (since light travels more slowly in glass than in air), while the other side continues to move at its original speed until it too reaches the glass. As a result, the ray bends inside the glass, i.e., the refracted ray lies in a direction closer to the normal (the perpendicular to the boundary of the media) than does the incident ray. A light ray entering a different medium is called the incident ray; after bending, the ray is called the refracted ray. The speed at which a given transparent medium transmits light waves is related to its optical density (not to be confused with mass or weight density). In general, a ray is refracted toward the normal when it passes into a denser medium and away from the normal when it passes into a less dense medium.

The Law of Refraction

Indexes of refraction are always equal to or greater than 1; for air, n=1.00029; for water, n=1.33. Using indexes of refraction, Snell's law takes the form sin i/sin r=nr /ni, or ni sin i=nr sin r. If the original medium is denser than the refracting medium (ni greater than nr), sin r will be greater than sin i. Thus, there will be some acute angle less than 90° for the incident ray corresponding to an angle of refraction of 90°. This angle of incidence is known as the critical angle. For angles of incidence greater than the critical angle, refraction cannot take place and the incident ray is instead reflected back into the original medium according to the law of reflection (angle of reflection equals angle of incidence). This phenomenon is known as total internal reflection.

Refraction has many applications in optics and technology. A lens uses refraction to form an image of an object for many different purposes, such as magnification. A prism uses refraction to form a spectrum of colors from an incident beam of light. Refraction also plays an important role in the formation of a mirage and other optical illusions.
The Columbia Electronic Encyclopedia™ Copyright © 2022, Columbia University Press. Licensed from Columbia University Press. All rights reserved.

[′krid·ə·kəl ¦aŋ·gəl]
(architecture)
The angle of pitch of a flight of stairs or a ramp that, if exceeded, is considered uncomfortable and unsafe; it is 50° for stairs and 20° for ramps.
(physics)
An angle associated with total reflection of electromagnetic or acoustic radiation back into a medium from the boundary with another medium in which the radiation has a higher phase velocity; it is the smallest angle with the normal to the boundary at which total reflection occurs.
McGraw-Hill Dictionary of Scientific & Technical Terms, 6E, Copyright © 2003 by The McGraw-Hill Companies, Inc.

An angle of pitch of stairs or a ramp which is considered uncomfortable and unsafe if exceeded; this angle is 50° for stairs and 20° for ramps.
McGraw-Hill Dictionary of Architecture and Construction. Copyright © 2003 by McGraw-Hill Companies, Inc.

If radio wave hits the ionosphere at an angle higher than critical angle, it would not be reflected back, but will pass through the ionosphere into space. 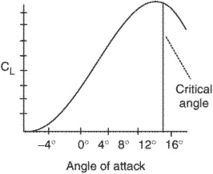 i. The minimum angle of incidence at which a radio wave of a particular frequency can strike the ionosphere and still be reflected back to the earth. Critical angle is a function of frequency; the higher the frequency, the larger the critical angle.
ii. The angle of attack of an airfoil at which the flow of air about the airfoil changes abruptly in such a manner that the lift is sharply reduced and the drag is sharply increased. Sometimes called stalling angle of attack.
iii. The angle at which a reflected ray of light when transmitted from a denser to a rarer medium is bent so far from the normal that it does not enter the rarer medium at all but travels parallel to the surface between the media.
iv. The angle of bank beyond which a helicopter resting on the ground on one skid or one wheel is likely to roll over in an uncontrolled manner.
At the instant of rollover of a helicopter, a moment is produced by the horizontal component of total rotor thrust about the point of ground contact of the skid. This moment is opposed by weight of the aircraft. If the angle of bank is beyond the critical angle the restoring moment is too small to stop the helicopter from rolling over.
An Illustrated Dictionary of Aviation Copyright © 2005 by The McGraw-Hill Companies, Inc. All rights reserved

In an optical fiber, the maximum angle from the axis at which light can remain confined within the core for "total internal reflection." In contrast to the "acceptance angle," which is measured outside the fiber, the critical angle is a measurement within the fiber. See numerical aperture.
Copyright © 1981-2019 by The Computer Language Company Inc. All Rights reserved. THIS DEFINITION IS FOR PERSONAL USE ONLY. All other reproduction is strictly prohibited without permission from the publisher.