(krōkā`), lawn game in which the players hit wooden balls with wooden mallets through a series of 9 or 10 wire arches, or wickets. The first player to hit the posts placed at each end of the field wins. The game developed in France in the 17th cent. Though the American public identifies it as a casual picnic sport, higher levels of play that feature manicured playing surfaces, skilled shotmaking, and cutthroat strategy increased in the 1980s. An annual contest between the United States Naval Academy and St. John's College of Annapolis is a growing rivalry.
The Columbia Electronic Encyclopedia™ Copyright © 2013, Columbia University Press. Licensed from Columbia University Press. All rights reserved. www.cc.columbia.edu/cu/cup/
The following article is from The Great Soviet Encyclopedia (1979). It might be outdated or ideologically biased. 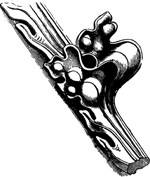 crocket
In Gothic architecture and derivatives, an upward-oriented ornament, often vegetal in form, regularly spaced along sloping or vertical edges of emphasized features such as spires, pinnacles, and gables.
McGraw-Hill Dictionary of Architecture and Construction. Copyright © 2003 by McGraw-Hill Companies, Inc.

a game for two to four players who hit a wooden ball through iron hoops with mallets in order to hit a peg
www.croquet.org.uk
www.croquetamerica.com
Collins Discovery Encyclopedia, 1st edition © HarperCollins Publishers 2005

Feedback
Flashcards & Bookmarks ?
Please log in or register to use Flashcards and Bookmarks. You can also log in with
Flashcards ?
My bookmarks ?
+ Add current page to bookmarks
Mentioned in ?
References in periodicals archive ?
The pictures show Mr Prescott wearing sunglasses and leaning on his croquet mallet on the lawn at Dorneywood in Buckinghamshire in the middle of Thursday afternoon, shortly after he took charge of running the country during Tony Blair's holiday in Italy.
Vultures circle over Prescott
Tyneside's John Moore swapped his usual croquet mallet for a putter and headed to the World Crazy Golf Championships in Hastings.
Moore is crazy for golf event
It is a special, time-warp experience to sit in the sunshine in this garden, with the background scents of flowers and birdsong which merges with the dull "thwock" of croquet mallet on ball.
Glorious creation of a Romantic spirit
Now Camilla Parker-Bowles, the most high-profile mistress in the country, has stepped out of the shadows and you'd have to club her with a croquet mallet to get her back in there again.
Julia Clarke; CAMILLA AIN'T SO CLEVER .
Neill Collins swung his leg like a croquet mallet as Steve Kabba jinked past him, and referee Neil Swarbrick pointed to the spot.
Football: Let the ball hit you on the nose or in the gob .. never turn your back and let it hit your a**e; McCARTHY'S REFLECTION ON A DEFLECTION
As a scrum of European media descended on this exclusive venue set in acres of pristine lawns and lily-padded ponds, an elderly lady strode purposefully through the grounds carrying a croquet mallet in its wooden case.
When captains and coaches of the Six Nations face a storm of questions a little light relief can be welcome; The official launch of the Six Nations, in a private member's club on the banks of the Thames, is never less than a bizarre mix of the serene and the surreal, writes Carolyn Hitt - and that's without inviting Max Boyce
There now seem to be so many polo clubs opening up and down the country that, just like any humble jockey born in the back streets of Belfast, if you prove to have a yen for galloping up and down on horseback at speed with what looks like a croquet mallet in your hand, then there's still a place for you.
Polo: Hole waiting to be filled by masses; A Saturday afternoon watching polo is not all posh nosh and tipples with the toffs, writes Ged Scott
"I have my croquet mallets in the corner," Geoff said.
'LIKE GOING BACK IN A TIMEWARP' FAVOURITE ROOM
In the children's novel Alice's Adventures in Wonderland by Lewis Carroll, which birds are used as croquet mallets? 6.
quick
We had a large barn, where previous owners had stored away all kinds of things from postcard albums to croquet mallets and rusty ice skates, much of it dating from a century before I was born.
Artists all dolled up for a day's work in the studio; The relationship between artists and mannequins stretches back hundreds of years. Richard Edmonds looks at a fascinating book exploring this dynamic PROFILE
Other reclaimed materials include pool decking purchased on Craigslist, wire fencing used as a trellis and, inside, repurposed croquet mallets used as hooks for hanging garden hoses.
Great garden sheds showoff
The games will be played with antique croquet mallets and balls.
West Brookfield breaks out the mallets and fiddles