Crux of heart | Article about crux of heart by The Free Dictionary
https://encyclopedia2.thefreedictionary.com/crux+of+heart
Printer Friendly

(kro͝oks) [Lat.,=cross], small but brilliant southern constellationconstellation,
in common usage, group of stars that appear to form a configuration in the sky; properly speaking, a constellation is a definite region of the sky in which the configuration of stars is contained.
..... Click the link for more information.  whose four most prominent members form a Latin cross, the famous Southern Cross. The long arm of the cross, terminating in the brightest member, AcruxAcrux
[from the Bayer designation α Crucis], brightest star in the constellation Crux (Southern Cross); 1992 position R.A. 12h26.2m, Dec. −63°04'. Its apparent magnitude of 0.
..... Click the link for more information.  (Alpha Crucis), points almost directly at the south celestial pole. Two other stars, MimosaMimosa
or Beta Crucis
, bright star in the constellation Crux (Southern Cross); 1992 position R.A. 12h47.3m, Dec. −59°39'. It is sometimes called Becrux, from its Bayer name, analogous to Acrux (Alpha Crucis) and Gacrux (Gamma Crucis).
..... Click the link for more information.  (Beta Crucis) and Gacrux (Gamma Crucis) are also among the brightest in the sky. Also in Crux is the Coalsack, a famous dark nebula. Crux reaches its highest point in the evening sky in May; its location in the far southern sky makes it visible most of the year to southern observers but not at all to observers north of about 25°N lat. 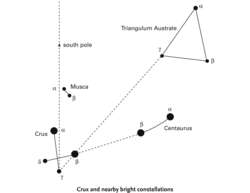 Crus and nearby bright constellations

(kruks) (Crux Australis; Southern Cross) The smallest but one of the most conspicuous of all the constellations in the sky, located in the southern hemisphere and lying in the Milky Way. The four brightest stars, Alpha (α), Beta (β), Gamma (γ), and Delta (δ) Crucis form a cross (see illustration). The zero-magnitude Alpha and the 1st-magnitude red giant Gamma form the longer arm that points approximately to the south celestial pole. The 1st-magnitude Beta and 2nd-magnitude Delta form the transverse arm. The 3rd-magnitude Epsilon (Ɛ), between Alpha and Delta, interferes with the figure's regularity. The area also contains the brilliant cluster the Jewel Box and the dark Coalsack nebula. Abbrev.: Cru; genitive form: Crucis; approx. position: RA 12.5h, dec –60°; area: 68 sq deg.