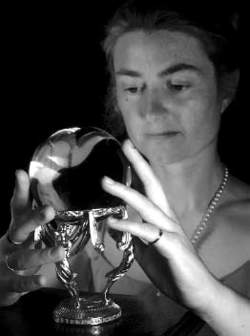 A clairvoyant looks into the future through a crystal ball. Courtesy Fortean Picture Library.

Crystal gazing is one of the oldest forms of divination. It falls under the general heading of scrying (or skrying), which covers the use of any and all reflective surfaces. The word scrying means “seeing;” pertaining in particular to seeing the future. There are also a number of specific terms under that heading; for example crystallomancy is working with crystals in general, be they balls or rough minerals, while spheromancy is the use of a crystal ball, specifically.

Crystal gazing is one way of promoting clairvoyance. However, a possible problem is that the practitioner may come to rely on the crystal and not be able to make contact without it. This is because of externalizing the visions rather than producing/receiving them inside the head.

For best results, a crystal or glass ball should be of about three to four inches in diameter and as clear as possible (e.g., free of bubbles or other defects). If a ball cannot be obtained then it is possible to proceed using a tumbler of water filled to the brim. This should be a clear, non-patterned glass. Ball or glass, it should stand on a piece of black cloth (velvet is best) so that there is nothing immediately around it in the field of vision that will draw attention and distract. The crystal ball should rest on a table at a comfortable height, though if preferred, the ball may be held it in the palm of the hand. With this form of clairvoyance it is a good idea to start by working in a quiet, semi-darkened room, with any light being behind the practitioner.

The eyes are closed initially and the mind made blank. Then, after a few moments, the eyes are opened to gaze into the crystal, with the mind still kept as blank as possible. The practitioner should try to look into the very center of the ball, rather than at the surface. The eyes should not be kept open and unblinking—just blinking naturally when necessary. One of two things will eventu ally happen. Someone or something may be immediately seen in the ball or else the ball will seem to start filling with white smoke. If it is the latter, then the smoke will fill the ball before gradually dissipating again and leaving a scene of a person or thing. The smoke filling the ball is known as “clouding.” Gray or even black smoke is no call for panic.

Many people get nothing at all the first time they try this. Initially, no more than ten minutes should be spent looking. Much longer than that will merely strain the eyes, so the experiment should be given up and tried again the following day. Some people see images right away but many more have to try for days or even weeks before getting results. The secret—if there is one—is as with so much in psychic development: do not strain to get results; just relax and let it happen.

The scene that does appear is akin to looking at a miniature television screen. It will usually be in color, although a few people do see only in black and white, and may be a still picture but is more likely to be moving. Anything might be seen, probably with no control over what comes at first. As progress is made, what or whom had been mentally asked for will appear. As in all mediumship exercises, it’s a good plan to try to contact a spirit guide before trying any scrying.

Feedback
Flashcards & Bookmarks ?
Please log in or register to use Flashcards and Bookmarks. You can also log in with
Flashcards ?
My bookmarks ?
+ Add current page to bookmarks
Mentioned in ?
References in periodicals archive ?
Her victory is less certain today but, although Luca Cumani's name does not appear on the roll of honour for the past ten years, he won it in 1989 and 1991 with two favourites in Ensconse and Crystal Gazing. So, he is capable of getting a filly ready for this.
Champagne effort puts Ouqba in with big shout
There are lots of other names that don't have the same over-earnest, crystal gazing deluded connotations to them.
KING of the ROAD
They will have to do some serious crystal gazing if we are not to leave a legacy of chaos.
Irish Mirror comment: Growing nation needs big ideas
His method is inspired partially by studies of crystal gazing and partially by the oracles of the dead, the psychomanteums of ancient Greece.
Reunions: Visionary Encounters with Departed Loved Ones
Fen Shui 3 b f Timber Country - Crystal Gazing She's a nice type of filly who has had a good winter and is going the right way.
She has stacks of potential, is making good progress and is a filly we are excited about
A colt by Xaar out of Belsay also made EUR420,000 at the sale last year, and Belsay, a half-sister to dual Group 3 winner Crystal Gazing, has a yearling colt by Orpen this time around.
Goffs' new strategy pays off as Orby Sale benefits; Bloodstock Desk
ASTON HOUSE STUD, which bred and campaigned high-class stayer Boreas and classy two- and three-year-old filly Crystal Gazing, maintain relatives to that pair among their broodmare band in Oxfordshire.
Crystal Gazing's legacy lives on through her daughter Dark Veil, who produced a "terrific" Singspiel filly in February and has been scanned in foal to Fantastic Light.
BLOODSTOCK DESK: Dali's Grey the pride of Aston House Stud's mares
"And I'm also riding a particularly nice two-year-old by Gone West out of Crystal Gazing, as yet unnamed, whose
Focus on the Flat: Why Mrs Johnston's choice of partner on the gallops is usually a tip in itself
Crystal Gazing (Luca Cumani) is a 5-1 chance, with Zigaura (David Elsworth) on 12-1 and 16 bar.
All our yesterdays:
Luca Cumani wins Ascot's Blue Seal Stakes for the fifth year in a row as Crystal Gazing (Lanfranco Dettori) beats Fairy Flax.
All our yesterdays
Jemima and Seazun both have 3lb penalties to carry, for their victories in the Lowther Stakes and Cheveley Park Stakes respectively, and though Crystal Gazing defied the extra burden, nine others have failed in the last 10 years.
10 Year Trends: Group form gives Aunty rosy chance