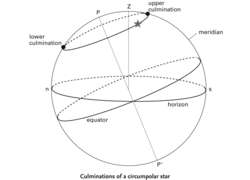 Culmination of a circumpolar star

[kəl·mə′nā·shən]
(astronomy)
The position of a heavenly body when at highest apparent altitude.
For a heavenly body which is continually above the horizon, the position of lowest apparent altitude.
(geology)
A high point on the axis of a fold.
McGraw-Hill Dictionary of Scientific & Technical Terms, 6E, Copyright © 2003 by The McGraw-Hill Companies, Inc.

Feedback
Flashcards & Bookmarks ?
Please log in or register to use Flashcards and Bookmarks. You can also log in with
Flashcards ?
My bookmarks ?
+ Add current page to bookmarks
Mentioned in ?
References in classic literature ?
It was so feeble and inconsistent a culmination to the beautiful scenery they had passed through, so hopeless and imbecile a conclusion to the preparation of that long picturesque journey, with its glimpses of sylvan and pastoral glades and canyons, that, as the coach swept down the last incline, and the remorseless monotony of the dead level spread out before them, furrowed by ditches and indented by pits, under cover of shielding their cheeks from the impalpable dust that rose beneath the plunging wheels, they buried their faces in their handkerchiefs, to hide a few half-hysterical tears.
View in context
As she ran her needle in and out of the wool, she thought of the various stages in her own life which made her present position seem the culmination of successive miracles.
View in context
"But you haven't answered my questions," she reproached him, as she emerged, rosy and radiant, from the embrace that had accompanied the culmination of his narrative.
View in context
It was in the year 1976 that the trouble between the world and China reached its culmination. It was because of this that the celebration of the Second Centennial of American Liberty was deferred.
View in context