(or Vitamin B12), C63H88CoN14O14P, a cobalt-corrin complex in which the cobalt atom is bonded to a cyano group, a nucleotide residue, and four reduced pyrrole rings; molecular weight, 1355.40. Cyanocobalamin is a dark-red crystalline compound, which is soluble in water and polar organic solvents. It was first isolated in crystalline form from cattle liver. Its structure was established by A. Todd and D. Crowfoot Hodgkin and their co-workers. 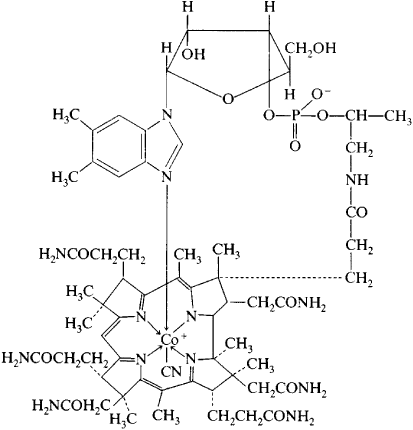 The primary sources of cyanocobalamin in nature are microorganisms; cyanocobalamin is synthesized by several bacteria, by actinomycetes, and by blue-green algae. It occurs in almost all animal tissues. It is not encountered, as a rule, in the tissues of higher plants (legume tubers are an exception). In ruminants, it is synthesized in sufficient amounts by the microflora of the intestine and the rumen. In man and several higher animals, such as birds and hogs, its synthesis by intestinal microflora is insufficient, and thus the vitamin must be obtained from food. The daily requirement for humans is about 5 μg. The major sources of the vitamin are liver, kidneys, fish meal, and milk.

In the form of its coenzymes methylcobalamin and deoxyadenosylcobalamin, cyanocobalamin participates in the enzymic reactions involved in hematopoiesis and facilitates normal liver function and nerve fiber regeneration. It is produced by microbiological synthesis using propionic-acid bacteria for the fermentation process.

Vitamin B12 is used for the treatment of pernicious anemia and other anemias, as well as of diseases of the central and peripheral nervous systems and the liver. It is prescribed in solutions for intramuscular injections. (See alsoVITAMINS; ANEMIA; and COBALAMINS.)