any one of a class of compounds whose molecules contain a number of atoms bonded together to form a closed chain or ring. If all of the atoms that form the ring are carbon, the compound is said to be carbocyclic; if not, the compound is called heterocyclic. Cyclohexane and benzene are homocyclic hydrocarbons; furfural is heterocyclic, as is pyridine. A cyclic compound that behaves chemically like the open-chain aliphatic compounds is said to be alicyclic; cyclohexane is such a compound. Many cyclic compounds exhibit the special properties characteristic of the aromatic compounds.
The Columbia Electronic Encyclopedia™ Copyright © 2013, Columbia University Press. Licensed from Columbia University Press. All rights reserved. www.cc.columbia.edu/cu/cup/
The following article is from The Great Soviet Encyclopedia (1979). It might be outdated or ideologically biased.

any one of a class of compounds, mainly organic compounds, containing one or more rings (cycles) consisting of three or more atoms. 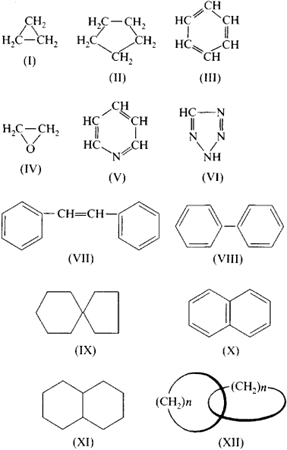