A water-cooled horizontal cylinder in which fuel (coal, gas, or oil) is fired and heat is released at extremely high rates. When firing coal, the crushed coal is introduced tangentially into the burner at the front end of the cyclone (see illustration). About 15% of the combustion air is used as primary and tertiary air to impart a whirling motion to the particles of coal. The whirling, or centrifugal, action on the fuel is further increased by the tangential admission of high-velocity secondary air into the cyclone. 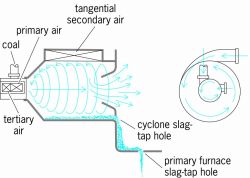 The products of combustion are discharged through a water-cooled reentrant throat at the rear of the cyclone into the boiler furnace. Essentially, the fundamental difference between cyclone furnaces and pulverized coal--fired furnaces is the manner in which combustion takes place. In pulverized coal–fired furnaces, particles of coal move along with the gas stream; consequently, relatively large furnaces are required to complete the combustion of the suspended fuel. With cyclonic firing, the coal is held in the cyclone and the air is passed over the fuel. Thus, large quantities of fuel can be fired and combustion completed in a relatively small volume, and the boiler furnace is used to cool the products of combustion. See Boiler, Steam-generating unit